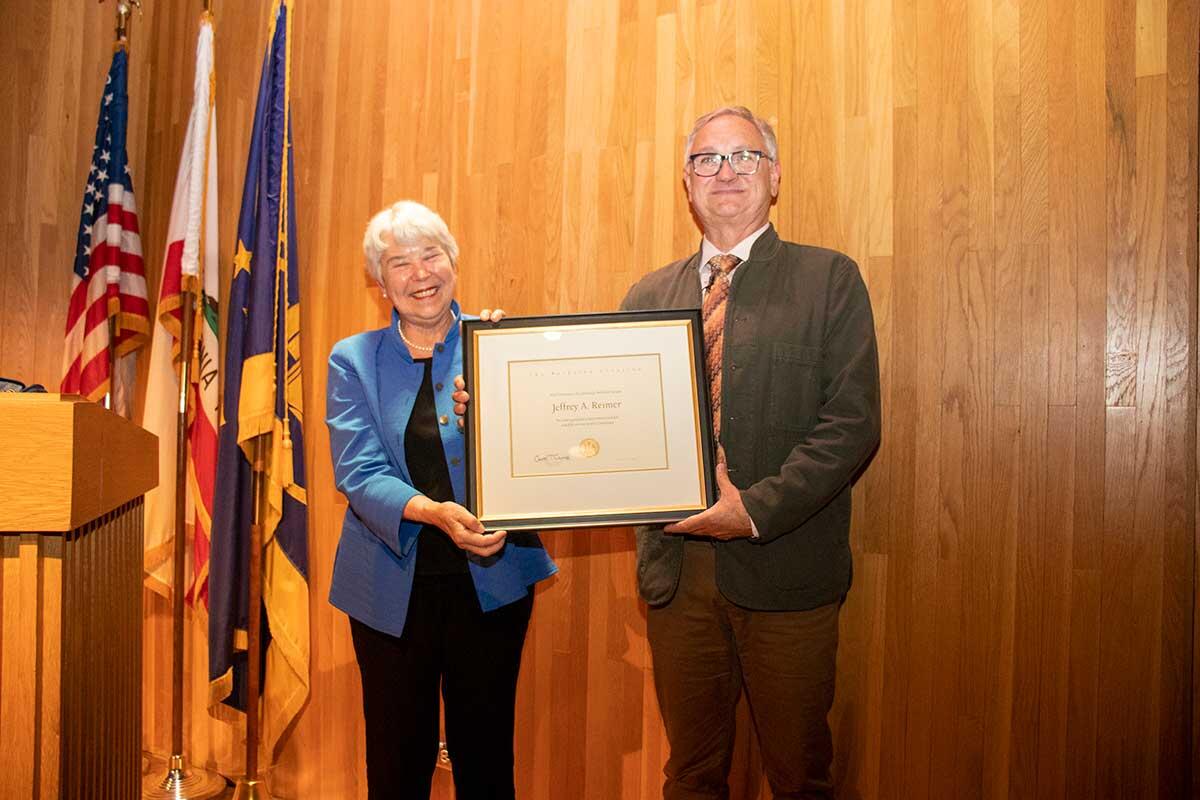 We are delighted to announce that Professor of the Graduate School Jeffrey Reimer was honored with the Berkeley Citation last night at the annual College of Chemistry G.N. Lewis lecture by Chancellor Carol Christ. The Berkeley Citation is awarded to distinguished individuals or organizations, academic or nonacademic, whose contributions to UC Berkeley go beyond the call of duty and whose achievements exceed the standards of excellence in their fields.

Professor Reimer was presented the award during his presentation as this year's guest speaker for the College's 69th G.N. Lewis lecture. His lecture was entitled: When the Chemical Bond is not Enough. The G.N. Lewis lectureship was established in 1954 through an endowment from Dr. George A. Linhart in memory of his teacher, G. N. Lewis, and is held annually in October to commemorate Lewis’s birthday (October 23, 1875). Lewis served as dean of the College of Chemistry from 1912 through his retirement in 1941 and was largely responsible for the college’s rise to fame.

During his tenure, Lewis’s faculty recruits included Wendell Latimer, Joel Hildebrand, and Kenneth Pitzer, as well as future Nobel Prize winners William Giauque, Willard Libby, Melvin Calvin, and Glenn Seaborg. Lewis is best known for his octet theory and the electron-pair bonding diagrams, which he first published in 1916, and for the generalized theory of acids and bases, which bears his name. Lewis’s 50-year career is a period widely regarded as one of the most brilliant times in the history of scientific discovery, and his name ranks among the highest on the list of those who made it so remarkable. 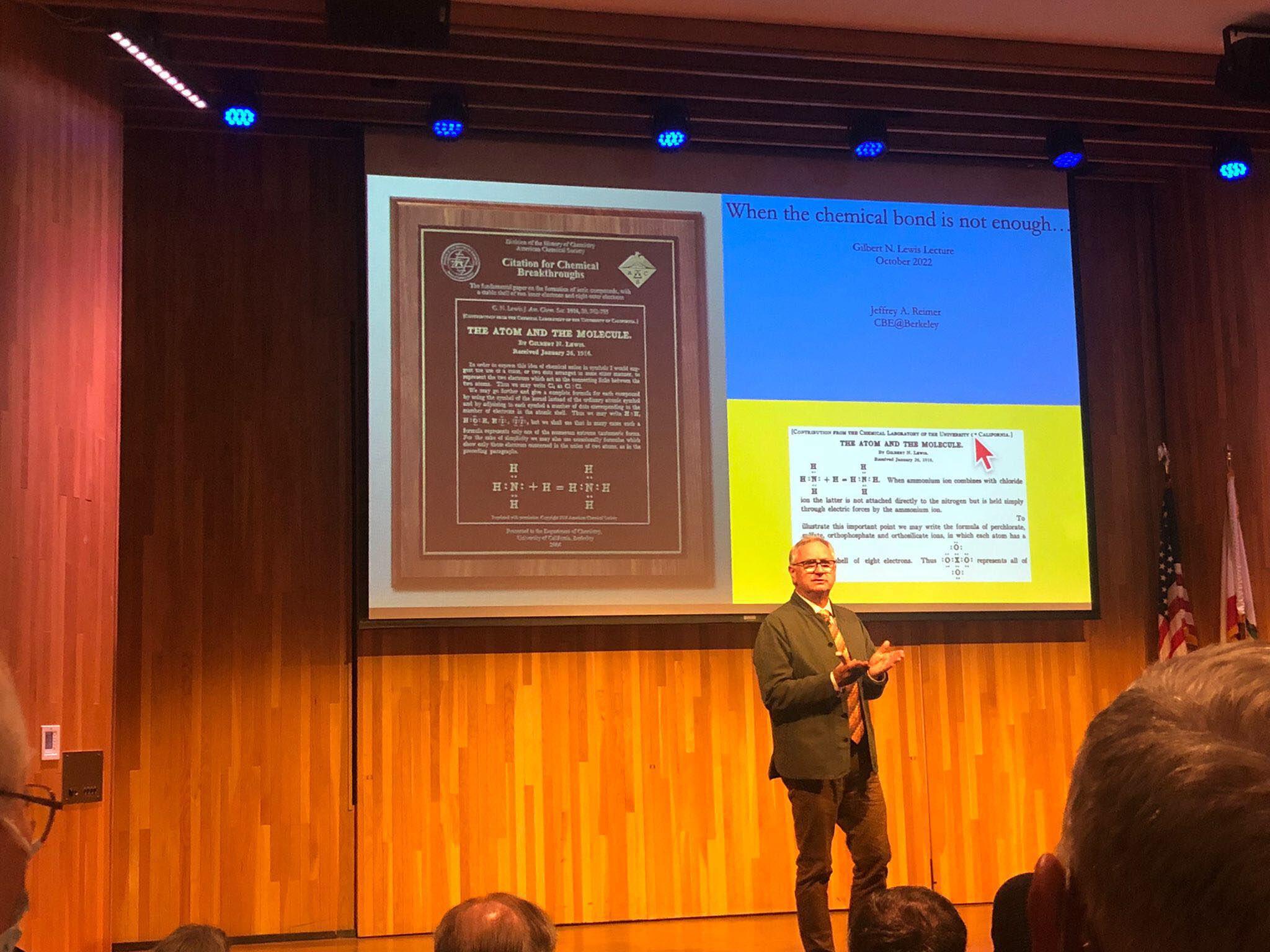 Professor Reimer during the lecture. Photo courtesy of the Reimer Lab.

A Renaissance polymath in his own right, Professor Reimer’s work has been generating new knowledge for environmental protection and sustainability, and providing fundamental insights to condensed matter through materials chemistry, physics, and engineering over the last 40 years here at Berkeley.

As an undergraduate student, he studied chemistry, physics, and biochemistry and ultimately received his bachelor’s degree in chemistry, with honors, from the University of California, Santa Barbara in 1976. He was the first in his family to get a college degree.

Professor Reimer ventured on to Caltech for his graduate studies. During his third year as a Ph.D. student, his thesis advisor sadly died in a plane crash. He cold-called Xerox PARC and persuaded the physicists there to host him for the last year of his Ph.D. While his chemistry Ph.D. peers sought jobs as postdocs in academia, he went to IBM in Yorktown Heights, New York, to split his time between silane reactor engineering in one division and semiconductor physics in another. Upon leaving IBM in 1982, he received faculty offers in three different disciplines: chemistry, physics, and chemical engineering. Lucky for the College of Chemistry, he began his independent career at Berkeley as an assistant professor in the Department of Chemical Engineering (now the Department of Chemical and Biomolecular Engineering) (CBE) in July 1982.

For his remarkable research achievements, Professor Reimer has been honored as a Fellow of the American Association for the Advancement of Science, the American Physical Society in the Division of Materials Physics, and the International Society for Magnetic Resonance. He received a Humboldt Research Award in 2014 for his work in materials chemistry and physics.

Equally impressive has been his impact on the Berkeley science community in regard to classroom teaching. He is the recipient of a Camille and Henry Dreyfus Teacher-Scholar Award, the AIChE Northern California Section Award for Chemical Engineering Excellence in Academic Teaching, the Donald Sterling Noyce Prize for Excellence in Undergraduate Teaching, the CBE Department Teaching Award (in 2000 and 2015), and the UC Berkeley Distinguished Teaching Award in 2003, which is the highest campuswide award bestowed on faculty for their excellence in teaching. He initiated and co-designed three new courses in CBE: Applied Spectroscopy, Carbon Capture and Sequestration, and Introduction to Chemical Engineering Design. He has co-authored textbooks for all three courses, which reach and engage a broad range of audiences.

Professor Reimer served as Chair of the Department of Chemical and Biomolecular Engineering from 2006 to 2011 and from 2013 to his retirement in June 2022.

The recording of the lecture is available below.