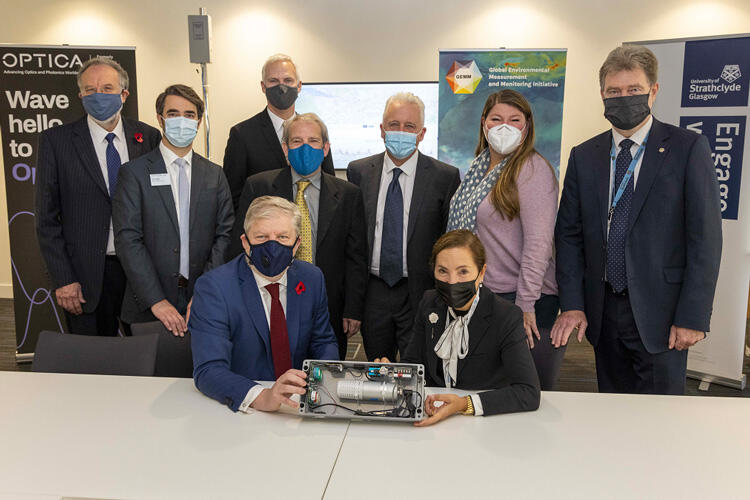 UC Berkeley's Ronald Cohen (standing, fourth from left) posed with one of the sensors he designed for realtime monitoring of greenhouse gases and pollution in cities. Seated and holding the sensor are California Lt. Gov. Eleni Kounalakis and Scottish cabinet secretary Angus Robertson. (Photo courtesy of Optica)

UC Berkeley’s Ronald Cohen, Professor of Chemistry and Earth and Planetary Science, was beaming behind his mask as he joined governmental officials from Scotland and California today (Nov. 3) at the 2021 Climate Summit (COP26) in Glasgow to demonstrate a sensor network he pioneered to provide realtime monitoring of greenhouse gas emissions in cities.

Piloted first in the Bay Area, the sensor network technology he and his group developed is now on the ground in Glasgow, providing city officials with the data they need to effectively reduce greenhouse gas emissions.

Cohen was joined by California Lieutenant Governor Eleni Kounalakis and Angus Robertson, Scottish Government Cabinet Secretary for the Constitution, External Affairs and Culture, as well as scientists and policymakers involved in the international Urban Air Project. That project, part of the Global Environmental Measurement & Monitoring (GEMM) Initiative, is a joint effort of scientific societies Optica and the American Geophysical Union.

“Most of the CO2 emissions that are responsible for climate change are in cities,” said Cohen, UC Berkeley professor of chemistry. “Transportation — cars, trucks, planes — home heating, air conditioning, industry. If we are going to reduce the pace of climate change, cities have to do their part all over the world.”

Like the network in the Bay Area, Glasgow’s 25 new sensors will monitor levels of greenhouse gases as well as air pollutants and particulate matter.
“Cities can make a substantial impact in GHG emissions reductions since they currently contribute more than 70% of the total. Until now, local governments have had limited access to timely data to help guide their GHG reduction policies,” said Tom Baer, GEMM co-lead and director of the Stanford Photonics

Research Center at Stanford University. “With these low-cost, real-time compact optical sensors deployed around the city, for the first time, leaders will have actionable science in hand to support strategic policy decisions.”

This localized modeling is the first to provide day-to-day, neighborhood-scale forecasts for cities and regions, which can be used to model future scenarios and as a way to assess current policies that aim to reduce greenhouse gases and air pollution emissions. Last year, for example, Cohen’s Bay Area BEACO2N network allowed him to see in real-time the impact of the pandemic shutdown on CO2 emissions.

“In the next five years, all the cities on the planet need to take quick and deliberate action,” Cohen said. “We stand ready with BEACON to provide observations that help them know their plans are occurring on track and on target.”

This international effort is a result of a collaboration between the University of Strathclyde, Glasgow City Council, Stanford University, UC Berkeley, Optica, AGU, the Met Office and the National Physical Laboratory (NPL).