Ever since graphene – a thin carbon sheet just one-atom thick – was discovered more than 15 years ago, the wonder material became a workhorse in materials science research. From this body of work, other researchers learned that slicing graphene along the edge of its honeycomb lattice creates one-dimensional zigzag graphene strips or nanoribbons with exotic magnetic properties.

Many researchers have sought to harness nanoribbons’ unusual magnetic behavior into carbon-based, spintronics devices that enable high-speed, low-power data storage and information processing technologies by encoding data through electron spin instead of charge. But because zigzag nanoribbons are highly reactive, researchers have grappled with how to observe and channel their exotic properties into a real-world device.

Now, as reported in the journal Nature, https://www.nature.com/articles/s41586-021-04201-y researchers at Lawrence Berkeley National Laboratory (Berkeley Lab) and UC Berkeley have developed a method to stabilize the edges of graphene nanoribbons and directly measure their unique magnetic properties.

The team co-led by Professor of Chemistry Felix Fischer and Professor of Physics Steven Louie, both faculty scientists in Berkeley Lab’s Materials Sciences Division, found that by substituting some of the carbon atoms along the ribbon’s zigzag edges with nitrogen atoms, they could discretely tune the local electronic structure without disrupting the magnetic properties. This subtle structural change further enabled the development of a scanning probe microscopy technique for measuring the material’s local magnetism at the atomic scale.

“Prior attempts to stabilize the zigzag edge inevitably altered the electronic structure of the edge itself,” said Louie, who is also a professor of physics at UC Berkeley. “This dilemma has doomed efforts to access their magnetic structure with experimental techniques, and until now relegated their exploration to computational models,” he added.

Guided by theoretical models, Fischer and Louie designed a custom-made molecular building block featuring an arrangement of carbon and nitrogen atoms that can be mapped onto the precise structure of the desired zigzag graphene nanoribbons. 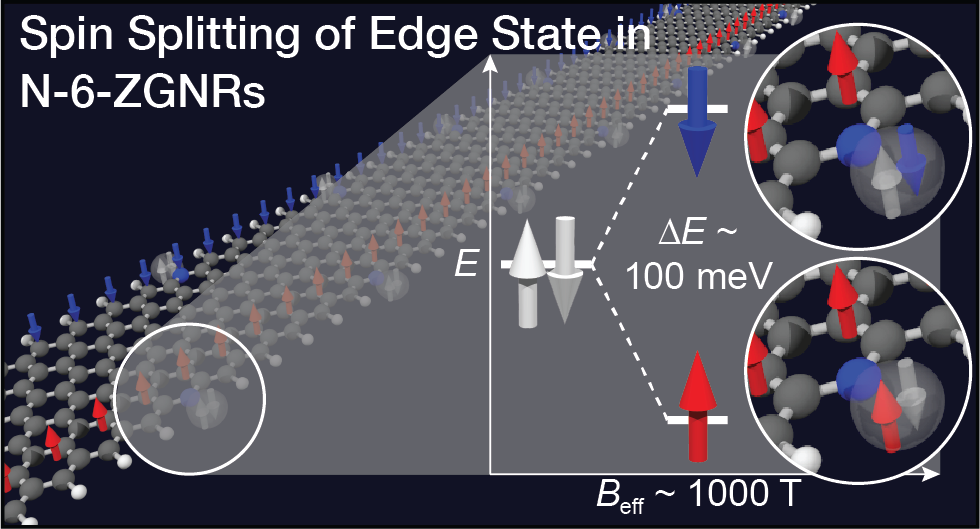 To build the nanoribbons, the small molecular building blocks are first deposited onto a flat metal surface, or substrate. Next, the surface is gently heated, activating two chemical handles at either end of each molecule. This activation step breaks a chemical bond and leaves behind a highly reactive “sticky end.”

“The unique advantage of this molecular bottom-up technology is that any structural feature of the graphene ribbon, such as the exact position of the nitrogen atoms, can be encoded in the molecular building block,” said Raymond Blackwell, a graduate student in the Fischer group and co-lead author on the paper together with Fangzhou Zhao, a graduate student in the Louie group.

The next challenge was to measure the nanoribbons’ properties.

“We quickly realized that, to not only measure but actually quantify the magnetic field induced by the spin-polarized nanoribbon edge states, we would have to address two additional problems,” said Fischer, who is also a professor of chemistry at UC Berkeley.

First, the team needed to figure out how to separate the electronic structure of the ribbon from its substrate. Fischer solved the issue by using a scanning tunneling microscope tip to irreversibly break the link between the graphene nanoribbon and the underlying metal.

The second challenge was to develop a new technique to directly measure a magnetic field at the nanometer scale. Luckily, the researchers found that the nitrogen atoms substituted in the nanoribbons’ structure actually acted as atomic-scale sensors.

Measurements at the positions of the nitrogen atoms revealed the characteristic features of a local magnetic field along the zigzag edge.

Calculations performed by Louie using computing resources at the National Energy Research Scientific Computing Center (NERSC) yielded quantitative predictions of the interactions that arise from the spin-polarized edge states of the ribbons. Microscopy measurements of the precise signatures of magnetic interactions matched those predictions and confirmed their quantum properties.