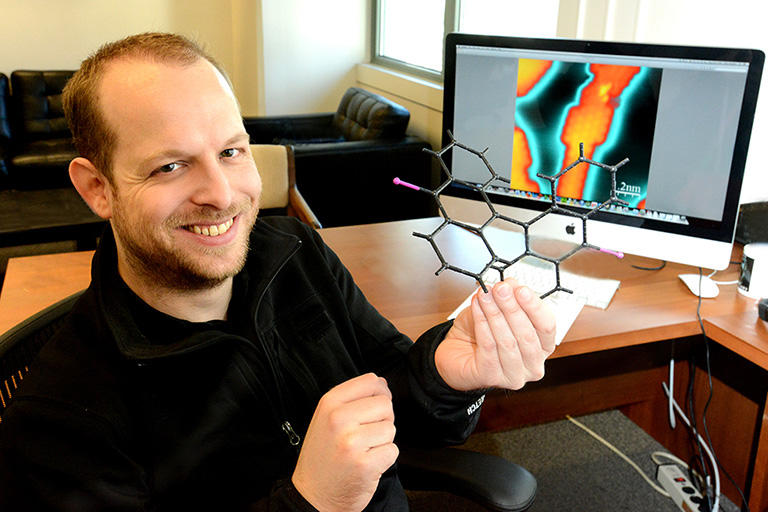 Our group is interested in the development of atomically unambiguously defined nanomaterials and their incorporation into functional electronic devices such as organic field-effect transistors, photovoltaic cells, and integrated molecular circuits.

The performance of state-of-the-art molecular electronic devices based on organic materials depends to a significant extent on the precise control of the structure over multiple orders of magnitude. While the individual bonds between atoms largely dictate the arrangement on a molecular level, the intermolecular order in close proximity to a metal-organic interphase remains unpredictable. One of the principal challenges of our research lies in the development of new synthetic self-assembly strategies that allow us to translate the well-defined structural control of single molecules (nm scale) into large homogeneous domains (mm scale). In an effort to accomplish this goal we employ tools derived both from supramolecular chemistry, as well as lessons learned from the study of ligand-protein interactions.

The potential of single layer graphene based electronic devices has been recognized mostly due to its exceptionally high charge carrier mobility. While the extended two-dimensional hexagonal carbon lattice is a semimetal or a zero-gap semiconductor, structural confinement to an essentially one-dimensional graphene ribbon opens a band-gap large enough to expose room temperature semiconductor properties. The commercial application of single layer graphene nanoribbons in molecular electronics is largely limited by the low yield and the inherent inhomogeneity of the materials produced by synthetic methods based on exfoliation of highly pyrolitic graphite, unzipping of carbon nanotubes, or epitaxial growth on catalytic surfaces. The primary goal of our research is the development of a synthetic approach towards atomically defined graphene nanoribbons.

The functionalization of readily available prochiral olefins has been established as a robust and highly versatile method for the introduction of chirality in organic synthesis. Whereas modern catalysts can accurately direct the stereoselctive outcome of these reactions, the regioselectivity is largely subjected to the substrate reactivity, and its control remains the dominion of a small number of synthetically useful enzymes, which are mostly capable of catalyzing only the corresponding type of chemical reaction. The long-term goal of this project is the development of a regio- and stereoselective catalyst system based on a supramolecular receptor capable of activating selected double bonds in polyenes. The proposed research aims at the development of a catalyst system combining the regio- and stereoselectivity normally found in an enzyme-mediated reaction with the broad substrate scope and reaction types associated with modern catalysts.