Tying electrons down with nanoribbons 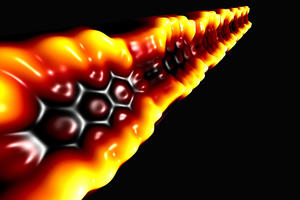 Scientists are experimenting with narrow strips of graphene, called nanoribbons, in hopes of making cool new electronic devices, but University of California, Berkeley scientists have discovered another possible role for them: as nanoscale electron traps with potential applications in quantum computers.

Graphene, a sheet of carbon atoms arranged in a rigid, honeycomb lattice resembling chicken wire, has interesting electronic properties of its own. But when scientists cut off a strip less than about 5 nanometers in width – less than one ten-thousandth the width of a human hair – the graphene nanoribbon takes on new quantum properties, making it a potential alternative to silicon semiconductors.

The synthesis of the hybrid nanoribbons was a difficult feat, said Felix Fischer, a UC Berkeley associate professor of chemistry. While theoreticians can predict the structure of many topological insulators, that doesn’t mean that they can be synthesized in the real world.

“Here you have a very simple recipe for how to create topological states in a material that is very accessible,” Fischer said. “It is just organic chemistry. The synthesis is not trivial, granted, but we can do it. This is a breakthrough in that we can now start thinking about how to use this to achieve new, unprecedented electronic structures.”

The researchers will report their synthesis, theory and analysis in the Aug. 9 issue of the journal Nature.