The College is saying farewell to Eric Granlund, Shop Supervisor: Machine Shop, Laboratory Equipment & Pump Repair Shop and the Glass Shop. Eric has been at the College since July 1985, concluding 33 years of service with his retirement this month.

In the 1970’s, Eric attended the University of Missouri, St Louis where he was studying engineering. His father, who was a mechanical engineer, had influenced him in his initial subject area. He took a summer job at the St. Louis University School of Medicine’s machine shop. He quickly realized he had found his calling.

In the shop, he learned how to fabricate prototype surgical instruments to support the open heart and neo-natal surgery units. “This kind of surgery was totally new and evolving at the time. Medical teams were figuring out how to save lives and what equipment they needed to do it with as they went along,” Eric states. “The machine shop was building those machines. We were also building lead radiation blocks based on the exact shape of a patient’s organs to support x-ray therapies for tumors.”

“There was a morgue attached to the medical school. One of the more interesting projects I worked on was helping to build an elevator to lower bodies down into the morgue from the street level.” Eric started as a helper in the shop in 1975, and had become a machinist by the time he left in 1978.

Again influenced by his father, and the closing down of the auto industry in the rust belt, Eric moved to Wyoming. “My Dad lured me to come west and be a machinist in a uranium mine in Wyoming. Uranium mining was exploding at the time. I looked at some positions but didn’t like the idea of working at a mine so I took a position in the Arts and Science Shop at the University of Wyoming. I stayed there from 1978 to 1985.”

Eric had heard about the College of Chemistry machine shop that was supporting exciting scientific research at UC Berkeley. He was used to a more urban environment and wanted to work at a major university in California. He stopped by the College during a vacation and talked to the team. They had a position open and offered it to him. “I never looked back,” he said. “I definitely had landed where I wanted to be.” Eric became shop supervisor in 1993.

“When I first arrived Nobel Laureate Y.T. Lee was the biggest shop user. We built a lot of apparatus for his lab. Also, we were building equipment for Professor Daniel Neumark who was one of Lee’s graduate students at the time. Lee was on the hill at the Lawrence Berkeley Lab from 1986 to 1987. In 1987 he took over William Giauque’s low temperature lab in Giauque Hall. The machine shop custom built much of the equipment for his new lab. Another professor we supported then was Norman Phillips. Phillip’s lab was working on measurements of low temperature properties. We built him a calorimeter that allowed him to measure heat capacity near absolute zero.

Professor Richard Mathies’ project in DNA sequencing using capillary array electrophoresis came along in the mid-1990s. “The human genome project was in full swing,” Eric states. The Human Genome Sequencing Consortium published the first version of the human genome in the journal Nature in February 2001. But in the mid-1990s the thinking was it was going to take another 100 years to complete the project. It was basically a “horse race” to see who could find a way to speed up the DNA sequencing. Mathies, and his research team, came up with a wholly new approach to the problem by creating a rotary scanner instead of the linear ones that were being used. We built the working prototype in the shop. Mathies went on to create a startup to manufacture the machine. “He asked me to join the company to aid in the commercialization of the unit but I wasn’t comfortable about leaving my job at the University,” Eric notes.

More recently the shop has worked on projects for Professors Omar Yaghi and Alex Pines. This year they helped build the technology for tests in Pine's lab to exploit defects in nanoscale and microscale diamonds to strongly enhance the sensitivity of magnetic resonance imaging (MRI) and nuclear magnetic resonance (NMR). They have also been involved in building components for tests that use an innovative porous metal-organic framework (MOF) developed by Professor Yaghi that captures water from the atmosphere using natural sunlight. The shop has recently added new machinary including a 3d printer and computer driven water jet and milling machines.

When Eric started in the machine shop, he car pooled, and worked with, Andy (Wilbur) Anderson who was a member of the team that built the infrared spectrometers for George Pimentel and Kenneth Herr’s Mars Mariner IR Spectroscopy project. Eric states, “The prototype spectrometer and data tapes were in storage in the shop for years. And then, in 1996, Laurel Kirkland, who was working on her Ph.D. in geophysics at Rice University, came looking for them with George’s wife Jean Pimentel.” Through Kirkland’s efforts, the tapes were read and the data decoded with the help of Kenneth Herr. “NASA took the spectrometer unit to study at the same time," Eric says. "They returned it sometime between 2010 and 2012. Richard Mathies was dean of the College and worked with the American Chemical Society to have the machine become a historic chemical landmark." The unit was inducted in a ceremony in 2017.

Eric smiles as he thinks back to the early days of his career. “It really was the wild wild west when I first started as a machinist. Vacuum technology was still in use. Advances in electronics – similar to advances in computers – have miniaturized and enabled research with much more sensitivity and accuracy. Machines have gone from the size of a room to a tabletop. But those same advances have devastated the need for the kind of shop that we have historically supported at the College. Now, instead of building whole machines, we build the interfaces between components. Students are no longer trained to build equipment. They just take it off a shelf, or buy it from a catalog.”

According to Eric, in 1985, there were nine machinists and 2 supervisors. When he retires at the end of June, there will be two machinists left. “I met G.D. Nelson’s great-grandson a few years back. We had a very interesting talk about Nelson who was the College’s first Chief Machinist in 1914. He was hired when G.N. Lewis arrived at the College. Lewis said he wouldn’t come to Berkeley from MIT unless there was a shop so the University built him one.” Eric continues, "The shops moved into the basement of Latimer Hall in 1964. Apparently the major advocate for their move at the time was William Giauque. He's quoted as saying, 'The shops are a pond, the physical chemists are the ducks, and they need a pond to swim in.'" 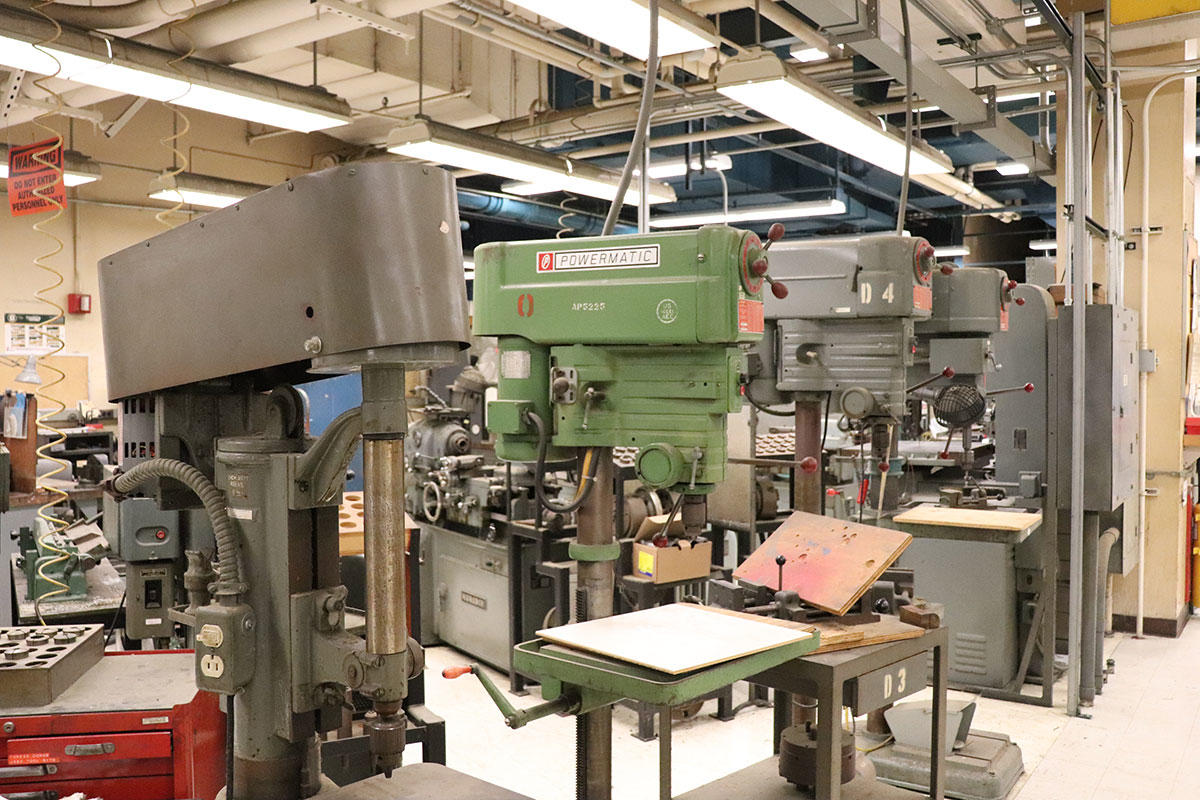