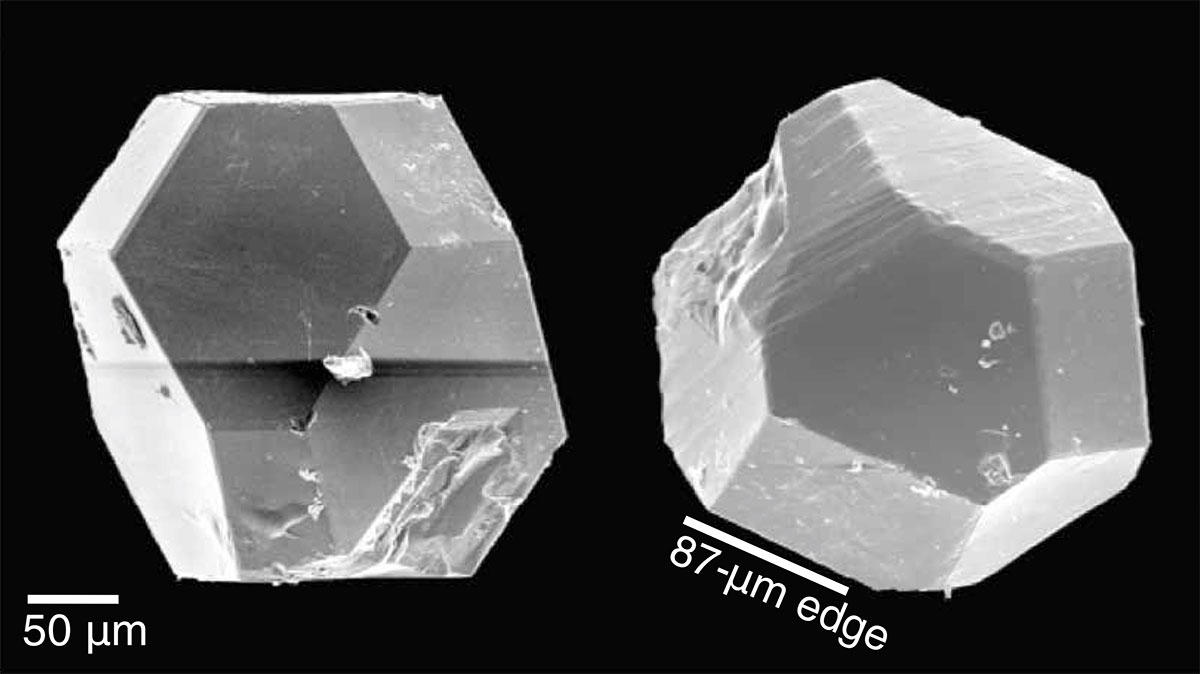 Above photo: Two SEM micrographs of diamond microparticles employed in the investigation. The particles have uniform size distributions and are characterized by their unusual truncated octahedral shape set by particle growth size.

In newly published research in the journal of Science Advances, lead researcher Ashok Ajoy, a postdoctoral scholar at UC Berkeley and an international research team, have announced the development of a new technology that has the potential to decrease the cost of multimillion-dollar medical imaging and spectroscopy devices. The research was carried out in the lab of Professor Alexander Pines, Glenn T. Seaborg Chancellor’s Professor Emeritus, and in close collaboration with Professor Jeffery Reimer, The Warren and Katharine Schlinger Distinguished Professor in Chemical Engineering.

Alex Pines said of the research, "What Ashok with his team and collaborators Carlos Meriles and Jeff Reimer have accomplished is amazing. In a powder of diamond nanocrystals they achieved a hyperpolarization almost three orders of magnitude higher than thermal, by means of optical pumping together with a novel method of microwave DNP by multiple sweeps."

The new technique harnesses tiny crystallites of diamond to obtain signal gains in MRI and NMR by light instead of magnets. In particular, the diamond consists of microscopic defects within the crystal structure with the remarkable property that possess electron spins that can be optically aligned by a modest application of laser light. This alignment -- termed as polarization -- is what a magnet traditionally does in MRI; instead here the role is played by the laser. This optically induced spin alignment can be transferred to surrounding nuclei, for instance 13C nuclei in the diamond to "hyperpolarize" them, i.e. providing NMR signals that are orders of magnitude larger than possible even with room-sized superconducting magnets.

Dartmouth Physics and Astronomy faculty member Chandrasekhar Ramanathan said of the research, "The versatility of NMR spectroscopy and imaging demonstrate its remarkable ability to probe local physical and chemical environments at the atomic scale.  However, it’s low sensitivity remains a drawback.   While multiple efforts have been made to overcome this limitation, the ability to hyperpolarize nuclear spins at room temperature across a broad range of materials remains a holy grail in NMR. This work demonstrates a new way to achieve large hyperpolarization of carbon-13 spins in diamond powders for the first time.“

Today’s MRI peers into the body “slice by slice” for medical imaging as well as its spectroscopic equivalent NMR in the pharmaceutical industry. The spectrum, acting as a unique chemical fingerprint, uniquely identifies molecules apart from similar ones suffering from low sensitivity. The signal remains proportional to the amount of nuclear spin that is situated in the same direction with each other.  For instance nuclei of hydrogen in water is targeted in clinical imaging. Even modest increases in signals can introduce daunting technological challenges -- often requiring the use of large room-sized superconducting magnets that are expensive to setup and hard to maintain. This research shows that there could be alternative paths to resolving this problem that does not require magnets.

A key to this undertaking is the ability to work with diamond in powdered form. A chalk like diamond dust, comprising of micro- or nanocrystalline particles are hyperpolarized by the introduction of laser light. The smaller the size of polarized diamond particles increases the surface area that can be bought into contact with a liquid, which can in turn might be hyperpolarize. "Optical hyperpolarized nanodiamonds has been an outstanding open problem in our field," stated Ajoy. “The technical challenges stemming from the orientations of the different crystallites in a random powder were perceived to be extremely difficult to surmount.”

“The solution proved remarkably simple," Ajoy continues, “And involved the use of a modest field, about the strength of a refrigerator magnet and low power laser excitation to setup the hyperpolarization.” The experimental breakthrough proved that hyperpolarized diamond powder was not only very easily achievable, but also astonishingly efficient. The team thus found a "completely new" polarizing mechanism partly because they probed a regime of ultralow magnetic fields that previously had been considered uninteresting.

One key to the discovery was the close collaboration of the Pines group with the College of Chemistry machine shop. Emanuel Druga, an electrician in the shop, played a crucial role in the design of several experimental tools that helped in debugging and benchmarking the polarization mechanism. “Druga led the development of a field cycling device that proved the most important step necessary to observe the first hyperpolarization in diamond powders,” said Ajoy.

The Berkeley team also involved participation from College of Chemistry undergraduate students.  Two students in particular, Kristina Liu and Raffi Nazaryan (recipient of the 2017 College of Chemistry Saegebarth Award) played an important role in the study and are listed as contributing authors in the published article.

“This was a multi-person effort,” noted Nazaryan. “It involved a big team working in multiple disciplines. Once we pushed beyond the initial boundaries, and had tackled all the technical challenges, we were welcomed to quite a surprise. We are at the cusp of an exciting venture. Our discovery has lead us closer to polarizing liquids and will help to drive the next research challenge.”

Colleagues from City College of New York, Peking University in China, and Technische Universität, Dortmund were also contributors of the research.