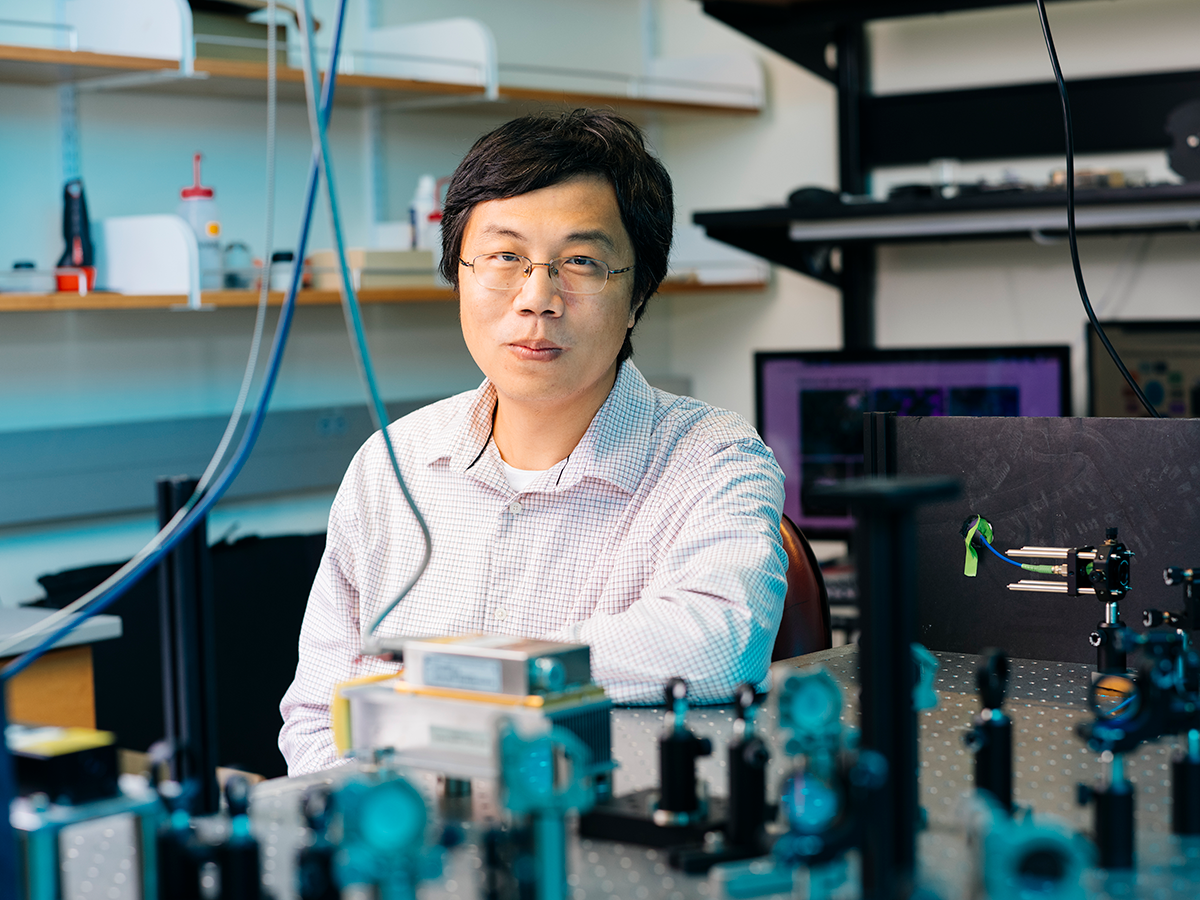 What do the smallest building blocks of life look like? How do molecules dance and dart and drift through cells, fold and fuse and form the machinery of living things? For Ke Xu, a 2021 Heising-Simons Faculty Fellow, these questions are at the forefront of everything he does. Xu wants to visualize living cells at the nanoscale; he wants to see things that were—until he made it possible—unseeable.

Many of the processes that underly the fundamentals of human health and disease happen at an impossibly small scale: a strand of DNA, for instance, is less than one-ten-thousandth the width of a strand of hair. The amyloid proteins that accumulate in brain cells of people with Alzheimer’s disease and the immune receptors that recognize cancer and viruses are only a few-fold bigger.

Historically, microscopy has produced images or videos that tell you the sizes, shapes, and layouts of what you’re looking at. Xu, an associate professor of chemistry at UC Berkeley, thinks it can do more.

“We want to use imaging to not only see where molecules are, but to fundamentally understand how molecules are interacting with each other and what their other physical properties are,” says Xu.

Xu is at the forefront of inventing new tools to interrogate properties of biological and chemical systems like acidity, electrical charge and how fast molecules are moving, at the single-molecule and nanometer-scale levels. This kind of information, not previously accessible through imaging, can not only yield new insights into the basic biology of life, but provide researchers with new clues on how to design drugs to manipulate molecules.

From materials science to biology

Xu hasn’t always studied living cells—he received his Ph.D. in physical chemistry from Caltech, where he studied the thermoelectric and superconductivity properties of nanomaterials. There, he learned about cutting-edge microscopy methods that were letting scientists visualize the tiniest details of these new materials. While interesting technologically, the things that Xu was probing were dead and motionless. Xu wondered whether new microscopy methods could capture dynamic, moving processes.

“These physical and chemical tools were incredibly powerful for us as materials scientists,” says Xu. “But their application to biology had been very limited and I saw an opening.”

To learn more about what biologists were already doing, and where he could make a difference, Xu became a post-doctoral research fellow in the Harvard lab of Xiaowei Zhuang, inventor of a super-resolution microscopy technique known as Stochastic Optical Reconstruction Microscopy (STORM). Before STORM, it was impossible to differentiate two molecules in biological samples from each other if they were closer than half a wavelength of light to each other. With STORM, however, individual fluorescent markers on nearby molecules turn on and off; because different markers are emitting light at different times, their locations become resolvable.

When Xu launched his Berkeley lab in 2013, he wanted to move beyond STORM. He imagined capturing the movements, chemical and electrical properties of molecules and revealing how they were interacting with each other—all things that typically require more than just a microscope to measure. 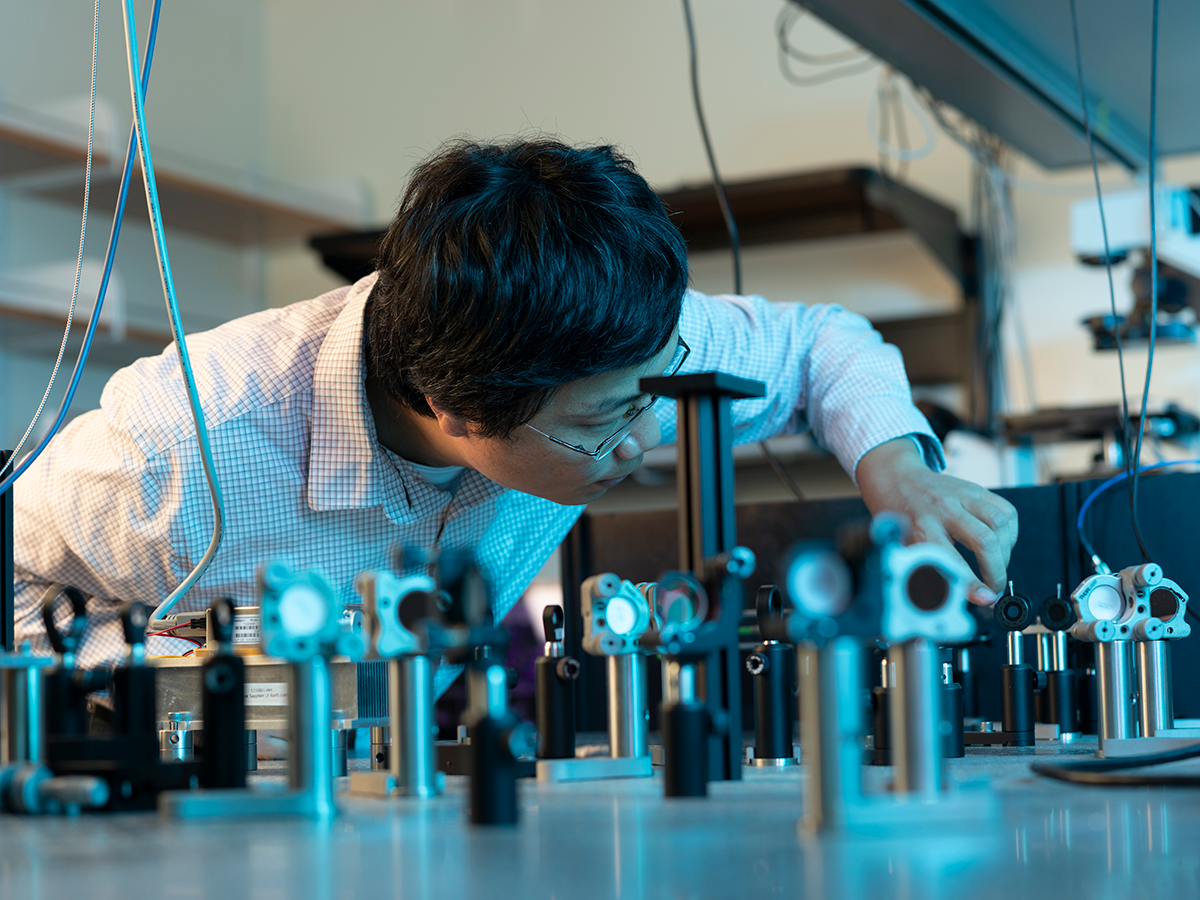 Ke Xu in his lab where he aims to understand how microscopic molecules move and interact to better understand biological processes. (Photo by Elena Zhukova)

One of the first properties of molecules they tackled was chemical polarity—the distribution of electrons across molecules in uneven ways. The polarity of molecules can impact how they interact and behave, including whether they prefer to dissolve in water or oil. While chemical polarity can be measured in bulk, “seeing” and mapping polarity in many molecules at once inside a living cell was a massive feat for Xu’s team. In 2017, they showed how their spectral-imaging-based method could detect polarity differences between cell membranes, and that those differences depended on levels of cholesterol in the membranes.

“This kind of technique is really exciting to me because now we know not only how a cell looks in shape, but also the functional distribution of different parameters in the cell,” says Xu.

In another project, Xu and his colleagues wanted to improve methods to see the movements of molecules as they diffuse, or freely float, through the watery interiors of cells. With normal microscopy methods, these molecular motions are too tiny and speedy to see.

“If you use a regular typical camera and try to record the motion of molecules, it’s hopeless because they just move too fast,” says Xu. “You can’t even see a single molecule.”

In 2020, Xu’s group developed a flashing laser that acted like a strobe light. The laser flashes on and off faster than the microscope’s camera shutter, providing a much briefer—and less blurry—snapshot of molecules’ locations. By repeatedly capturing images in this way, researchers can assemble a kind of stop-motion video of molecular movements.

Xu used this method, which can show molecules’ movements over a 500 microsecond time period, to reveal how molecules tend to move at different speeds in different parts of a cell. 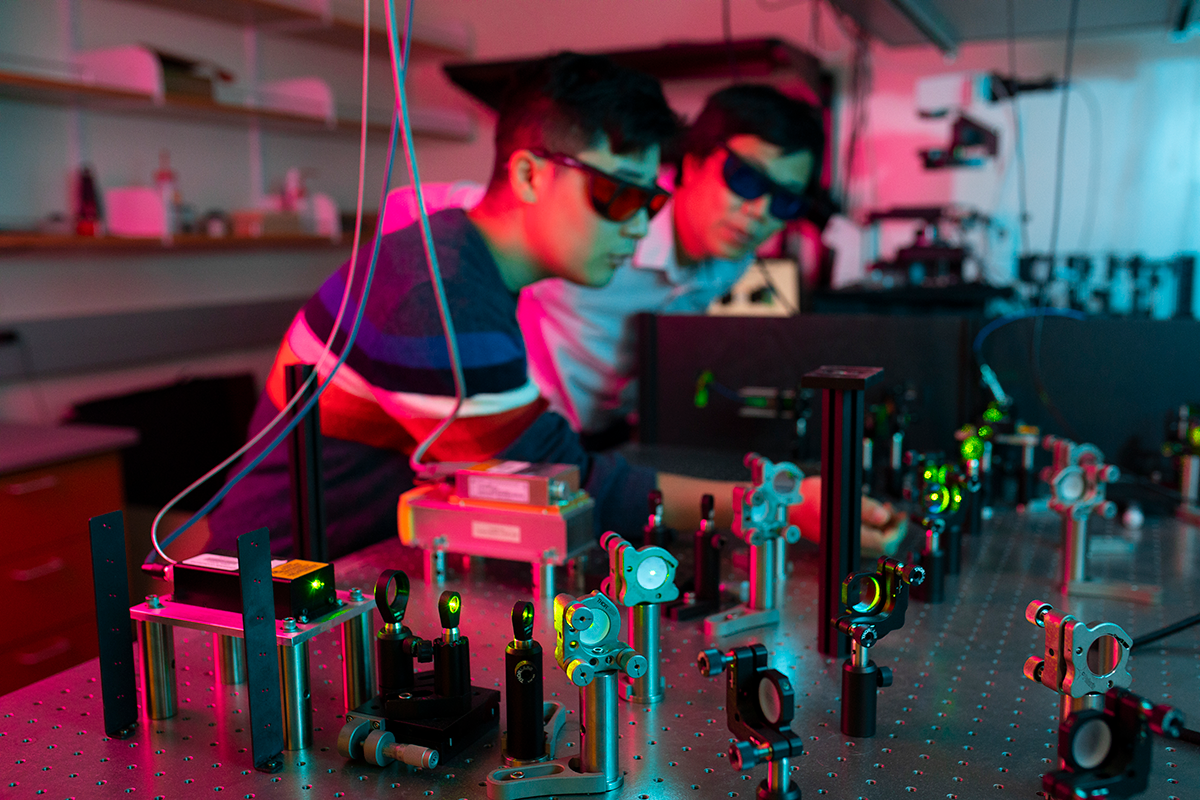 This kind of research seems basic—Xu admits much of it is driven by a fascination with both biology and technology—but it also has a plethora of applications in studying health and disease. Tracking molecules' movements, for instance, can reveal how and when molecules clump up; if those molecules play a role in disease, this kind of clumping can be critical to understand. The same kinds of studies can also paint a picture of how drugs move through cells and take action.

“Motion underlies a lot of physical processes in a cell. Our tools let us visualize the interactions between molecules and all sorts of chemical and physical parameters of the molecules,” says Xu. “When you combine all these things it really can capture the state of the cell.”

Xu credits his materials science background with his unique viewpoint in how to develop these cutting-edge new methods. He looks at data and optics in different ways that most biologists, he says.

“I often handle this single-molecule data with a physical science perspective,” he says. “Even though these are inside living cells, they’re single molecules behaving according to the rules of physics.”

The Heising-Simons Faculty Fellows Program is accepting applications for the 2023 cycle until February 3, 2023. To learn more about the program and how to apply, please visit the program website: https://vcresearch.berkeley.edu/heising-simons/about

A big step toward ‘green’ ammonia and a ‘greener’ fertilizer
END_OF_DOCUMENT_TOKEN_TO_BE_REPLACED