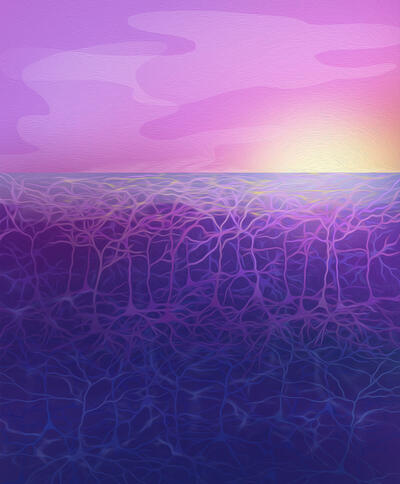 Different layers of the cortex are visualized as depths in the ocean, with the sun playing the role of light/vision. (Illustration by Julia Kuhl.)

Scientists have long researched the interplay of how nature (genetics) and nurture (sensory experience following birth) shape our brains and make us who we are. In early brain development, environmental stimuli are considered indispensable for the healthy development of many brain regions executing functions essential for the organism’s survival. This formative period addresses the development of vision, language, motor functions, cognitive abilities, and social skills. Labeled as “critical periods” (Charles Stockard, 1921)[1], this experience-dependent period, was first thoroughly elucidated in the visual system through research by Hubel and Wiesel culminating in a Nobel Prize in Physiology or Medicine.[2] One of their celebrated experiments reported that during the critical period, visual input from both eyes was essential for the development of anatomical structures in the visual cortex that regulate binocular vision. In the subsequent years, understanding the mechanisms underlying the critical period of development has been one of the central areas of developmental neuroscience.

However, a major gap in many studies has remained the lack of resolution of experience-dependent changes at the level of the myriad, diverse types of neurons that make up the brain. The primary reason for this is that neither was their identification complete nor were methods to study this diversity systematically accessible until recent technological developments in single-cell genomics. Single-cell genomics allows the molecular state of individual cells to be measured at high throughput.  While these advances have enabled a better understanding of neuronal diversity in different brain regions, a systematic understanding of how this diversity is shaped during the critical period has been missing up until now.

We return to the visual cortex, the system originally studied by Hubel and Wiesel. A new study from the labs of Professors S. Lawrence Zipursky (UCLA)  and Karthik Shekhar (UC Berkeley) presents significant findings that shine an exciting light on our understanding of the influence of vision during the critical period of development in the mouse visual cortex.” The study was led by Dr. Sarah Cheng (PhD student, Zipursky Lab at UCLA), Mr. Salwan Butrus (PhD student, Shekhar Lab at UC Berkeley) and postdoctoral associate Dr. Liming Tan (Trachtenberg and Zipursky Labs at UCLA). 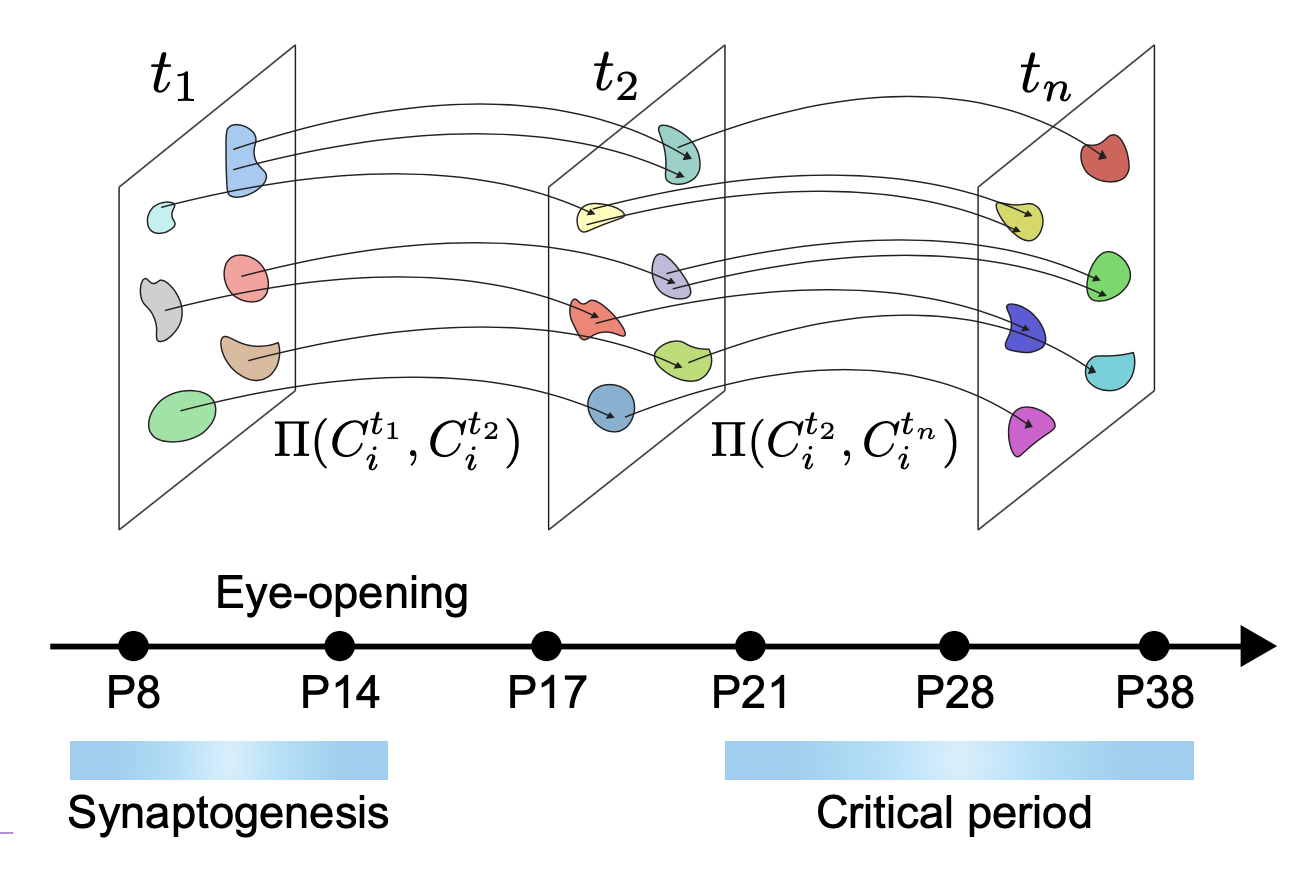 To study the vision-dependent cortical development at the level of the diverse neuronal types, the researchers measured snapshots of the transcriptional state (i.e. expression levels of ~20,000 mRNA molecules) of over 220,000 individual cells spanning six postnatal ages and three light-rearing conditions. As these measurements involve lysis of the cells, each cell can only be measured once. Inference of temporal developmental processes therefore required the researchers to use machine learning approaches to “stitch” together these measurements. This enabled the researchers to track progressive changes in the transcriptional state of each of 40 cell types spanning the visual cortex.

An unexpected result of this analysis was that the development of a small population of so-called excitatory neurons residing in the upper-most layers of the visual cortex was delayed in comparison to other neurons. While the identity and distinctiveness of most neuronal types were present before eye opening, the establishment of these upper-layer excitatory neurons happened during the period that the animal first experienced vision. This suggested but did not prove that vision was in fact required for these changes. By combining visual deprivation experiments, molecular and genetic tools, anatomical studies and functional imaging, the authors showed that this was indeed the case. They found that the presence of visual input during the critical period was crucial to regulate the patterned expression of ~200 genes in these neurons that governed the molecular, spatial and functional identity of these cells. Knocking out one of these genes resulted in significant defects in cortical cells that respond to binocular visual input, thereby linking the transcriptomic findings to a visual function

Prof. Zipursky said of the findings, “Surprisingly, the research demonstrated that experience, in this case visual experience, can specify the types of cells that form in the brain. And these changes, in turn, can alter neural circuits and brain function. ”

Prof. Shekhar added, “In most cases transcriptomic analyses tend to be a high-resolution description of how the neural tissue is organized. In this case, it was gratifying to find some patterns that were relevant for function.”  More generally, the results suggested the possibility that experience-dependent cell type specifications could be general aspect mammalian brain development.

The results have important implications for other types of critical periods beyond the visual system. The findings demonstrate that postnatal experience specifies a specific set of cortical neuronal cell types and the expression of specific genes regulating the formation of connections between them. This surprising discovery establishes a new principle of brain development and might have broader implications for early brain development in children.

About the Principal Investigators

Prof. Zipursky is currently focused on how neural circuits are formed during development – specifically, how different neuronal cell types are interconnected by precise patterns of synaptic connections. Prof. Zipursky and his team work to identify the cellular recognition molecules that specify interactions between neurites, axons, and dendrites, ultimately leading to the formation of circuits connected at synapses. Working in fruit flies and mice, the team employs a variety of approaches in their studies, from genetic tools and live imaging to high-throughput RNA sequencing and CRISPR technology. Their findings could shed light on abnormal neural circuit development in some neuropsychiatric diseases.

Prof. Shekhar is currently focused on research to get a deeper understanding of the genomic and physicochemical underpinnings of neuronal diversity and function. Shekhar and his team are working to understand how diverse neuronal types arise during developmental and evolutionary time scales. To achieve this goal, they are leveraging experimental techniques of single-cell genomics to generate large datasets, and develop computational approaches rooted in statistical inference to translate data in biological insights.

Major funding (UCLA) for this project was provided by the W.M. Keck Foundation [Zipursky and Trachtenberg]. Further grants were provided by the National Institute of Health grant# R00EY028625 (UC Berkeley) and start-up funds from the College of Chemistry and UC Berkeley.

Contacts for this press release

[2] Hubel and Wiesel received the Nobel Prize in 1981 “for their discoveries concerning information processing in the visual system.”