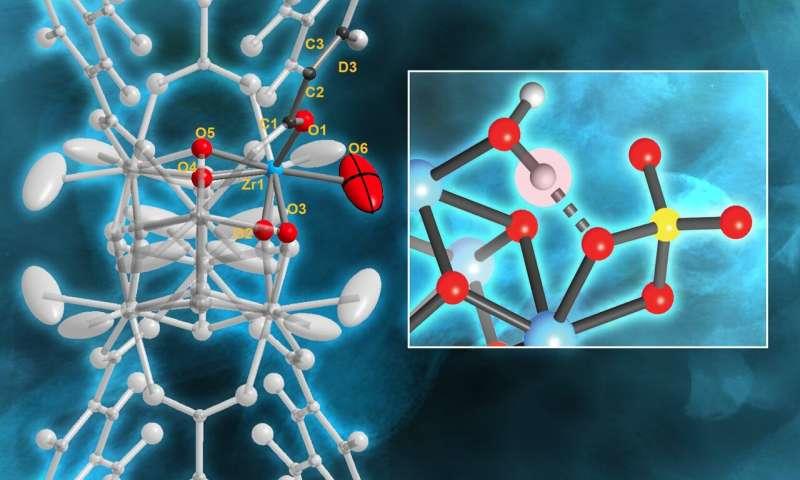 Image: (left) Neutrons revealed which Brønsted acid site in MOF-808-SO4 is primarily responsible for the MOF’s ability to efficiently convert base substances like petroleum into other chemicals. (right) They also revealed the hydrogen bonds that form when the MOF is well hydrated and that are strongly correlated with the MOF’s excellent catalytic performance. (zirconium–blue, oxygen–red, carbon–light gray, sulfur–yellow). Credit: Chris Trickett, UC Berkeley and Jill Hemman, ORNL

Scientists have used neutron scattering to identify the secret to a metal-organic framework's (MOF) ability to efficiently convert chemicals, through a process called catalysis, into new substances. By probing a material known as MOF-808-SO4, the team discovered molecular behavior that causes the catalyst to become less acidic, which could slow down the catalytic process vital in making products such as plastics, fragrances, cosmetics, flame retardants and solvents.

Their findings, detailed in Nature Chemistry, are expected to help spur the development of new MOF catalysts that industry can use to improve the process of turning substances such as petroleum into C8 chemicals—chemicals with eight carbon atoms.

To study the MOF's molecular behavior, scientists from University of California–Berkeley, Stanford, the Department of Energy's Lawrence Berkeley National Laboratory and DOE's Oak Ridge National Laboratory conducted experiments on the POWGEN instrument at the Spallation Neutron Source located at ORNL. They discovered what makes MOF-808-SO4 an efficient catalyst and why, under certain conditions, it loses its effectiveness over time.

"We developed a new MOF that is a very good catalyst for the production of C8 chemicals, but we hadn't identified the active site in the material that was responsible for its excellent catalytic performance," said Omar Yaghi of UC Berkeley.

MOFs such as MOF-808-SO4 have high potential for future catalysis applications because of their enormously high surface area and versatility in chemical motifs. They are not yet widely used in chemical production because they are currently more expensive to produce than the more widely used zeolites, which are materials with porous structures based on silica (one of the main ingredients in sand).

"We discovered that one Brønsted acid site, in a very specific configuration, is primarily responsible for the MOF's catalytic activity, and that the MOF becomes less efficient over time when the catalytic process causes the depletion of water in that site," Yaghi said.

Brønsted acids are chemical compounds that "want" to donate positively charged hydrogen ions to other base molecular structures that want to grab the protons. This occurs because they have extra electrons, giving them a negative charge that strongly attracts protons.

The strongest Brønsted acid in MOF-808-SO4 consists of a specific arrangement of adsorbed water and sulfate on clusters of zirconium oxide. When a water molecule adsorbs to one zirconium atom, it participates in a hydrogen bond. This motif, in turn, results in the presence of a strongly acidic proton. Upon dehydration, the material loses its acidity.

Understanding how and where water binds to the MOF is crucial because when the MOF is well hydrated, it exhibits excellent catalytic performance.

Neutrons are uniquely sensitive to lighter elements like hydrogen and oxygen which makes them perfectly suited to locate the water and the acid sites. Scientists took advantage of these properties using neutron powder diffraction on POWGEN.

"We tried to complete the research project with x-ray diffraction, but we couldn't conclusively locate the hydrogen and water in the structure—in part because we couldn't grow a single crystal of the MOF that was large enough," said Chris Trickett from UC Berkeley. "The unique characteristics of neutrons and ORNL's modeling expertise attracted our attention, because it made it possible to study the MOF in powder form and in an inert environment to get the missing structural data that we needed."

Neutron powder diffraction is ideally suited for studying materials that scientists cannot synthesize as a single crystal that is large enough and remains stable long enough to be studied. Once the experiment is completed, the neutron powder diffraction data was processed and then entered into a model created by the research team that made it possible for them to interpret the information.

"I worked very closely with Chris from sample preparation for powder diffraction measurements to data analysis of the neutron study," said ORNL's Ashfia Huq, an instrument scientist for POWGEN. "Thanks to modern technology, we could Skype with each other to work through the details of modeling the data that was critical to cracking the structure of this compound."

Scientists from around the world are trying to understand the secrets of how these materials work at atomic scales so they can design more efficient and less expensive MOFs. After almost two decades of intensive research, MOFs are finally finding use in niche markets like novel gas storage and release, but the goal is to unlock their mysteries and find widespread commercial use.

The research team hopes to continue studying this MOF and to test their theory that it can be easily recharged by introducing water vapor during the catalytic process.

"If we can demonstrate an easy and inexpensive way to recharge this material, it will make it a very attractive alternative to the inexpensive but inefficient catalysts that the chemical industry uses today," said Trickett. "Our work could identify new ways to produce this MOF more cheaply or to further increase its effectiveness."