On June 20, 2018, HRH Prince Khaled Bin Sultan announced the winners of the 8th Award of the Prince Sultan Bin Abdulaziz International Prize for Water  (PSIPW) at the opening session of UNISPACE+50 in Vienna, Austria. The team of Professors Omar Yaghi (UC Berkeley) and Evelyn Wang (MIT) have won the Alternative Water Resources prize, which will be awarded at the United Nations Headquarters in New York City. 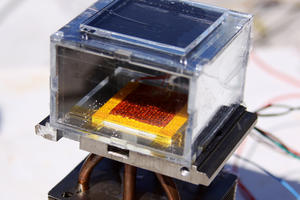 Dr. Yaghi and Dr. Wang have invented a device using an innovative porous metal-organic framework (MOF), developed by Dr Yaghi, that captures water from the atmosphere using natural sunlight. The device, which was constructed according to Dr. Yaghi’s vision with the assistance of a team at MIT led by Dr. Wang, is capable of harvesting 2.8 liters of water per kilogram of MOF daily at relative humidity levels as low as 20%, operating passively without any power input, aside from ambient sunlight at a flux of less than 1 sun (1 kilowatt per square meter). The ease with which MOFs can be designed, made, and modified by Yaghi bodes well for their commercialization and widespread use for water harvesting.

According to the  World Economic Forum,  "Billions of people lack access to clean water for all or part of the year or must travel far to gather it. Extracting water directly from the air would be an immeasurable boon for them. But existing technologies generally require high moisture and a lot of electricity, which is expensive and often unavailable." The Forum showcased the Yaghi/Wang harvester as one of the top ten emerging technologies in 2017.

In a recent article by Smithsonian Magazine, Yaghi stated, “My vision is to achieve ‘personalized water,’ where people in water stressed regions have a device at home running on ambient solar, delivering the water that satisfies the basic needs of the individuals,” he says. “More than one third of the population in the world lives in water-stressed regions or is suffering from lack of clean water. The potential implications of this technology in transforming people’s lives and improving the global public health conditions are tremendous.” Yaghi's UC Berkeley team recently unveiled the next-generation MOF water harvester that had successful desert trials, making it a step closer to realizing this vision.

The Prince Sultan Bin Abdulaziz International Prize for Water  (PSIPW) is a scientific prize with a focus on innovation. Established in 2002 by HRH Crown Prince Sultan Bin Abdulaziz, it rewards the efforts made by scientists, inventors and research organizations around the world which contribute to the sustainable availability of potable water and the alleviation of the escalating global problem of water scarcity.

To this end, PSIPW awards a suite of five biennial prizes, covering the entire water research landscape. In this way, PSIPW encourages research to find solutions to the various water-related challenges facing the world today.

Professor Wang joined the MIT faculty in 2007. Wang is an internationally recognized leader in phase change heat transfer on nanostructure surfaces. As a researcher, one of her main focuses has been developing more efficient energy and water systems. Wang’s work on solar cells that create cheap and continuous electricity by converting heat into focused beams of light was named as one of MIT Technology Review’s 10 Breakthrough Technologies of 2017.

She is a professor and director of the Device Research Laboratory at MIT. She was appointed associate head of the Department of Mechanical Engineering (MechE) in 2017. She has served as co-chair for MechE’s Strategic Planning Committee and the MechE Lincoln Laboratory Task Force.