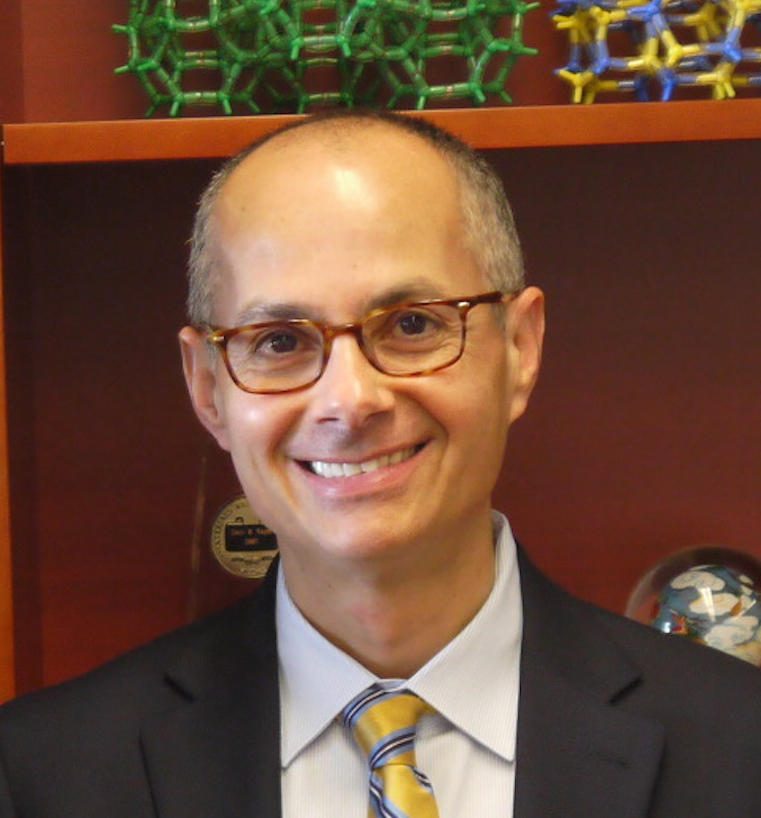 The James and Neeltje Tretter Professor of Chemistry

We are developing the science of building chemical structures from molecular building blocks; a field we refer to as Reticular Chemistry. It is concerned with linking of molecular building blocks (organic molecules, inorganic clusters, dendrimers, peptides, proteins,...) into predetermined structures in which such units are repeated and are held together by strong bonds. This research has led to the discovery of several classes of porous crystalline materials: metal-organic frameworks, covalent organic frameworks, and zeolitic imidazolate frameworks (MOFs, COFs, and ZIFs). In practice, this kind of chemistry requires a multi-disciplinary approach involving inorganic synthesis of metal complexes and frameworks, organic synthesis of the linkers and synthetic modification of frameworks' interior, solid-state and solution synthesis, and the characterization techniques associated with these diverse areas ranging from electron microscopy, NMR, X-ray crystallography, neutron diffraction to gas adsorption isotherm measurements. We design open frameworks to have ultrahigh porosity (up to 6,000-10,000 meter square per gram) exceeding traditional porous materials such as zeolites, mesoporous silica and carbon; making MOFs, COFs and ZIFs useful for clean energy storage and generation.

Presently, we are able to design the structure of the frameworks, their functionality, and the pore environment and metrics to produce crystalline materials capable of storage and separation of hydrogen, methane, carbon dioxide, water, volatile organics, peptides and proteins. The ability to functionalize the interior of the pores also results in enzyme-like active sites installed within the confines of such MOF structures for their use in catalysis of reactions leading to clean energy generation: conversion of methane to methanol, water to hydrogen and oxygen, organic cyclization reactions, and carbon-carbon bond breaking reactions.

We have also made progress in transferring this precise control in building frameworks to the design of nano-MOFs and the development of their use as supercapacitors, proton and electron conductive materials. We continue to extend this chemistry to new frameworks and nanocrystals in which the pores are decorated by multiple functionalities arranged and apportioned in unique sequences throughout the material. We believe these regions and sequences code for specific properties in a way that is not too dissimilar from sequences of nucleotides in DNA and amino acids in proteins. Thus our work is aimed at making MOF, COF and ZIF materials capable of (a) counting and sorting molecules, (b) having compartments which are linked yet function synergistically, (c) carrying out multiple catalytic transformations in precisely controlled molecular space, and (d) exhibiting hybrid properties of molecular recognition, signal transduction and mechanical action.

Recently, we have succeeded in demonstrating the use of MOFs to harvest water from the desert air, as well as pioneered molecular weaving. We used coordination chemistry to bring together organic threads in a weaving manner. Once the structure is formed, it can be demetalated leaving behind a thoroughly woven organic ‘cloth’ for which the elastic properties are dramatically different than those of the metalaled forms. Molecularly woven chemical structures of this kind provide means of accessing frameworks that combine dynamics with resiliency. The principles of this new science are being extended to polymers and nanocrystals.

Omar M. Yaghi received his B.S. degree from State University of New York-Albany (1985), and Ph.D. from the University of Illinois-Urbana (1990) with Professor Walter G. Klemperer. He was an NSF Postdoctoral Fellow at Harvard University (1990-92) with Professor Richard H. Holm. He has been on the faculties of Arizona State University (1992-98), University of Michigan (1999-2006), and UCLA (2007-2011). He is currently the James and Neeltje Tretter Chair Professor of Chemistry at UC Berkeley, and a Senior Faculty Scientist at Lawrence Berkeley National Laboratory. He is the Founding Director of the Berkeley Global Science Institute. He is also the Co-Director of the Kavli Energy NanoScience Institute, and the California Research Alliance by BASF.

His work encompasses the synthesis, structure and properties of inorganic and organic compounds and the design and construction of new crystalline materials. He is widely known for pioneering several extensive classes of new materials termed metal-organic frameworks, covalent organic frameworks, and zeolitic imidazolate frameworks. These materials have the highest surface areas known to date, making them useful in clean energy storage and generation. Specifically, applications of his materials are found in the storage and separation of hydrogen, methane, and carbon dioxide, and in clean water production and delivery, supercapacitor devices, proton and electron conductive systems. The building block approach he developed has led to an exponential growth in the creation of new materials having a diversity and multiplicity previously unknown in chemistry. He termed this field 'Reticular Chemistry' and defines it as 'stitching molecular building blocks into extended structures by strong bonds'.

His early accomplishments in the design and synthesis of new materials have been honored by the Solid-State Chemistry Award of the American Chemical Society and Exxon Co. (1998) and the Sacconi Medal of the Italian Chemical Society (2004). His work on hydrogen storage was recognized by Popular Science Magazine which listed him among the 'Brilliant 10' scientists and engineers in USA (2006), and the US Department of Energy Hydrogen Program Award for outstanding contributions to hydrogen storage (2007). He was the sole recipient of the Materials Research Society Medal for pioneering work in the theory, design, synthesis and applications of metal-organic frameworks and the AAAS Newcomb Cleveland Prize for the best paper published in Science (2007). He is also the recipient of the American Chemical Society Chemistry of Materials Award (2009), Izatt-Christensen International Award (2009), United Kingdom's Royal Society of Chemistry Centenary Prize (2010), China Nano Award (2013), King Faisal International Prize in Science (2015), Mustafa Prize in Nanoscience and Nanotechnology (2015), TÜBA Academy Prize in Basic and Engineering Sciences (2016), Royal Society of Chemistry Spiers Memorial Award (2017), King Abdullah II Order of Distinction of the First Class (2017), Japan Society of Coordination Chemistry International Award (2017), Bailar Medal in Inorganic Chemistry (2017), Kuwait Prize in Fundamental Sciences (2017), Albert Einstein World Award of Science conferred by the World Cultural Council (2017), BBVA Foundation Frontiers of Knowledge Award in Basic Sciences (2018), and Wolf Prize in Chemistry (2018). He published over 250 articles, which have received an average of over 300 citations per paper. He is among the top five most highly cited chemists worldwide.