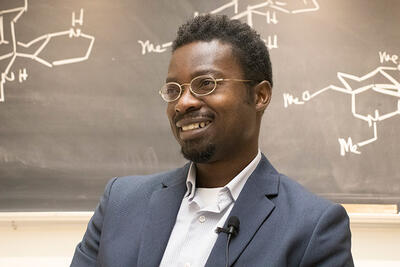 The College of Chemistry is pleased to announce that Richmond Sarpong, UC Berkeley Professor of Chemistry and Executive Associate Dean of the College of Chemistry, has been named a member of the American Academy of Arts and Sciences. This year, the Academy has elected  276 artists, scholars, scientists, and leaders in the public, non-profit, and private sectors. Sarpong joins fellow members singer Joan Baez and writer Ann Patchett in the 2020 cohort.

The Academy was founded in 1780 by John Adams, John Hancock, and others who believed the new republic should honor exceptionally accomplished individuals and engage them in advancing the public good.

In its 240th year, the Academy continues to dedicate itself to recognizing excellence and relying on expertise – both of which are more important than ever.

“The members of the class of 2020 have excelled in laboratories and lecture halls, they have amazed on concert stages and in surgical suites, and they have led in board rooms and courtrooms,” said Academy President David W. Oxtoby (Ph.D. '75, Chem). “With today’s election announcement, these new members are united by a place in history and by an opportunity to shape the future through the Academy’s work to advance the public good.”

Sarpong said of the honor, "I am grateful to members of my research group, both past and present, without whom this would not be possible, as well as my colleagues at Berkeley and elsewhere for their support. I am humbled to be recognized in this way".

The new members join the company of Academy members elected before them, including Benjamin Franklin and Alexander Hamilton in the eighteenth century; Ralph Waldo Emerson and Maria Mitchell in the nineteenth; Robert Frost, Martha Graham, Margaret Mead, Milton Friedman, and Martin Luther King, Jr. in the twentieth; and – in the past two decades – Antonin Scalia, Michael Bloomberg, John Lithgow, Judy Woodruff, and Bryan Stevenson.