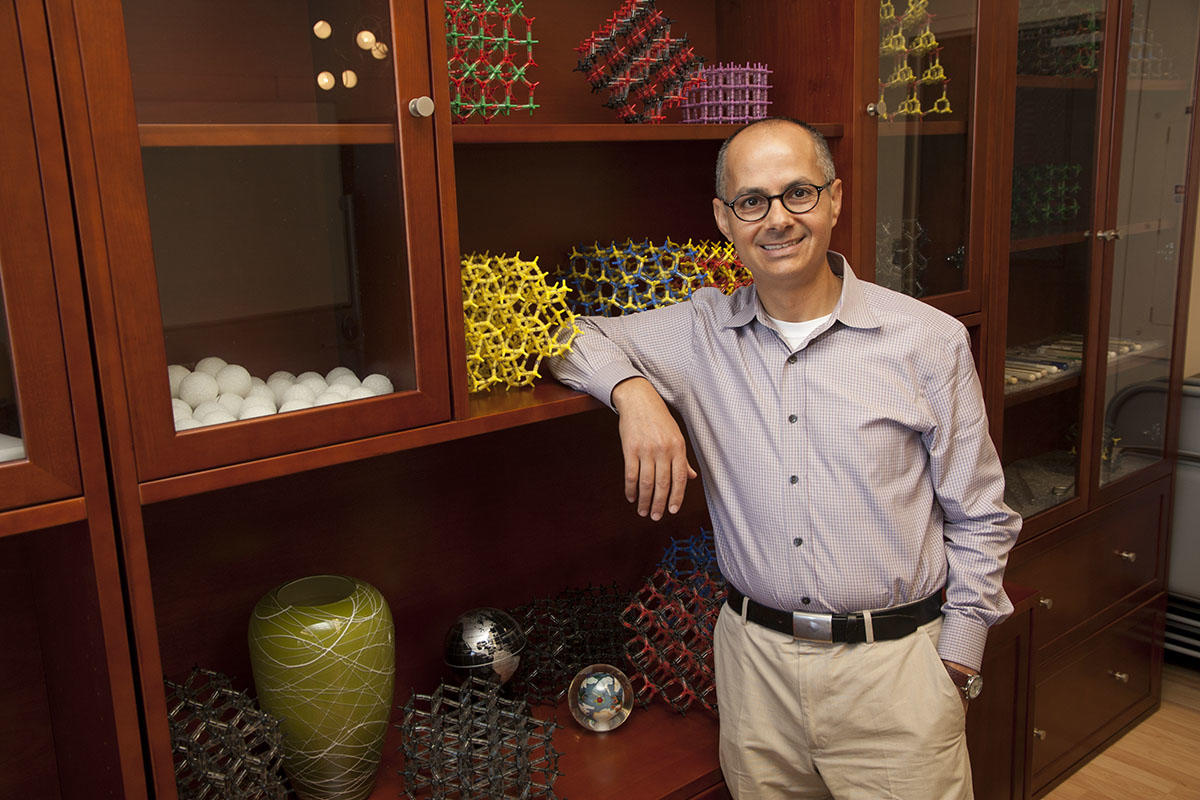 The College of Chemistry at UC Berkeley is pleased to announce that Professor Omar Yaghi has received the 2020 Sustainable Water Award from the Royal Society of Chemistry. The Society annually recognizes leaders in various fields of chemistry around the world. Prof. Yaghi received this award for his "impactful development of water harvesting from desert air using metal-organic frameworks".

This year, the Society acknowledged over 80 individuals and teams for their exceptional achievements in advancing the chemical sciences through their work in everything from education and research, to innovation, policy and volunteering.

Professor Omar Yaghi has pioneered a new branch of science called reticular chemistry resulting in porous materials called Metal–Organic Frameworks (MOFs), Covalent Organic Frameworks (COFs), and Zeolitic Imidazolate Frameworks (ZIFs). These substances are the most porous known to date and can be easily designed and transformed chemically, making them useful for hydrogen and methane storage, carbon capture and conversion, and catalysis, to mention a few applications.

Particularly, Professor Yaghi has pioneered the use of these porous crystals such as MOFs to harvest water from desert air, and MOFs do it so efficiently that no additional energy is needed other than the warmth of the natural sunlight.

Professor Yaghi called for “personalized water” in which he laid out a vision of having water off grid in the future, where people have a device at home running on ambient solar energy, delivering the water that satisfies the needs of a household. He believes at a time when fresh water resources are becoming increasingly scarce, it is important to establish water as a basic human right that must be guaranteed to every person on earth.

The Yaghi group is developing the science and applications of precise assembly of materials by utilizing reticular chemistry to create molecular building blocks (organic molecules, inorganic clusters and complexes, proteins, peptides, and dendrimers) that are linked into extended frameworks using strong bonds. This chemistry allows for the translation of the high functionality of molecules into solids without losing the robustness needed for making useful materials, or the dynamics and molecular flexibility required for highly functional materials. Thus new materials are created by 'stitching' metal-ions and metal complexes with organic linkers to make extended porous frameworks called metal-organic frameworks (MOFs), and zeolitic imidazolate frameworks (ZIFs). A third class of organic units created are covalent organic frameworks (COFs). This approach is elaborated to make metal-catecholates (CATs) and metal triazolates (METs).

These are all new classes of porous crystals made by our group, and studied worldwide for their applications to clean energy storage and generation, clean water generation and delivery, supercapacitors, thermal batteries, ion-conductivity, electronic conductivity, and drug delivery.

Professor Yaghi is a member of the US National Academy of Sciences, and has been honoured with many awards for his scientific accomplishments, including King Faisal International Prize in Science (2015), Albert Einstein World Award of Science (2017), BBVA Foundation Frontiers of Knowledge Award in Basic Sciences (2017), Wolf Prize in Chemistry (2018), ENI Award for Excellence in Energy (2018), Gregori Aminoff Prize by the Royal Swedish Academy of Sciences (2019), and August-Wilhelm-von-Hofmann-Denkmünze of the German Chemical Society (2020).

About the Royal Society of Chemistry

The Royal Chemistry Society (RSC) was established in 1841 by a group of doctors, academics, manufacturers and entrepreneurs. Thomas Graham, inventor of dialysis, was the first President.

Seven years later Queen Victoria granted a Royal Charter to the Society, confirming its purpose for "the general advancement of Chemical Science".

For over 175 years, the Society's mission has remained just as relevant and valid; their work today still fulfills the roles undertaken by all four long-established bodies. They pursue that mission on a scale the first 77 members would find inconceivable. The RSC now has over 54,000 members across the world, an internationally-renowned not-for-profit publishing and knowledge business, and a reputation as an influential champion for the chemical sciences.