With nanotubes, genetic engineering in plants is easy-peasy

So, now you have a plant that is edited, but that would be considered non-GMO outside of Europe.
Markita Landry

Inserting or tweaking genes in plants is more art than science, but a new technique developed by University of California, Berkeley, scientists in the lab of Markita Landry could make genetically engineering any type of plant—in particular, gene editing with CRISPR-Cas9—simple and quick. 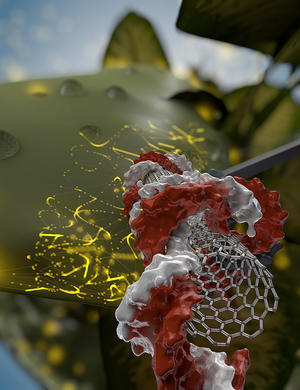 image: A gene (red and white) bound to a carbon nanotube can easily diffuse into plant cells, where it is expressed as if it were the cell’s own gene. In this case, inserting the gene for green fluorescent protein makes the leaves glow green. The nanotube is 1 nanometer in diameter and several hundred nanometers long. (Graphic by Ella Marushchenko)

To deliver a gene, the researchers grafted it onto a carbon nanotube, which is tiny enough to slip easily through a plant’s tough cell wall. To date, most genetic engineering of plants is done by firing genes into the tissue—a process known as biolistics—or delivering genes via bacteria. Both are successful only a small percentage of the time, which is a major limitation for scientists seeking to create disease- or drought-resistant crops or to engineer plants so they’re more easily converted to biofuels.

Nanotubes, however, are highly successful at delivering a gene into the nucleus and also into the chloroplast, a structure in the cell that is even harder to target using current methods. Chloroplasts, which have their own separate, though small, genome, absorb light and store its energy for future use, releasing oxygen in the process. An easy gene-delivery technique would be a boon for scientists now trying to improve the efficiency of light energy capture to boost crop yields.

The nanotube not only protects the DNA from being degraded by the cell, but also prevents it from being inserted into the plant’s genome. As a result, the technique allows gene modifications or deletions that in the United States and countries other than the European Union would not trigger the designation “genetically modified,” or GMO.

“One of the advantages is just the time saved with a technology like this,” said Markita Landry, a UC Berkeley assistant professor of chemical and biomolecular engineering. “But I think the major advances are going to be the ability to quickly and efficiently deliver genes to plants across species and in a way that could enable the generation of transgenic plant lines without integration of foreign DNA into the plant genome.”

A key use would be CRISPR-Cas9 gene editing: delivering the gene for Cas9, which is the enzyme that targets and cuts DNA, along with the DNA encoding guide RNA—Cas9’s address label—to edit specific genes with high precision. And DNA bound to a nanotube is very hardy.

“We assessed the stability of the constructs and the cost and, on both counts, this is amenable for garage science,” Landry said. “You can put these things in an envelope and mail them just about anywhere. You don’t need a fridge, a gene gun, bacteria; you don’t need very much to work with them, and they are stable for months. We can generate them at scale, freeze them, thaw them—they are robust little things.”

Landry and her colleagues will report their results online Feb. 25 in advance of publication in the journal Nature Nanotechnology.

Landry discovered that nanotubes easily slip though plant cell walls, which are known for their tough layers, while trying to label cells with nanotube sensors. The sensors ended up inside the cell, not on the cell surface.

Berkeley researchers injected a solution of carbon nanotubes loaded with DNA coding for green fluorescent protein into the leaves of various plant species, from tobacco to cotton, resulting in strong GFP protein expression throughout the leaf without integrating into the plant genome.

She immediately saw how to flip this around to deliver genes into plants. Current methods are cumbersome and can be low-yield. Using gene guns is destructive; it’s like blowing a hole in a plant cell and hoping your gene and the cell both survive. Not all plants can be infected by gene-carrying Agrobacterium, and another technique, using pathogenic viruses to carry genes, works for an even narrower range of plants and risks inserting viral DNA into the plant’s genome. All have to be customized for each plant, and the DNA delivered is integrated into the genome: the definition of GMO.

Eager to give it a try, Landry and her colleagues wrapped the gene for green fluorescent protein (GFP) around a nanotube and injected it into an organic arugula leaf purchased from a local Whole Foods Market. Within a day, the plant cells glowed green under UV light, indicating that the GFP gene had been transcribed and translated into protein, as if it were the plant’s own gene.

The effect lasted only a few days, however, probably because the proteins get recycled, and the DNA slowly degrades.

A short lifetime is not a drawback, however.

“Part of what makes the platform unique is that the expression is transient. When we look in the microscope seven to 10 days later, the expression is gone, the fluorescence is gone. That is not the case with Agrobacterium,” Landry said. For scientists studying how plants work, expressing a gene for a short time can tell them a lot about the gene’s role in the cell.

“For this to be a widely useful platform, however, we need to express a protein that in and of itself has a permanent effect on the nuclear genome,” she added.

Her plan is to package DNA into a single-stranded plasmid that is then attached to a carbon nanotube. Within two or three days after diffusing into the cell, both the Cas9 protein and CRISPR guide RNA would be expressed, allowing them to link up to form a ribonucleoprotein complex that edits the genome, permanently. She has not found any toxic effects from the nanotube.

“So, now you have a plant that is edited, but that would be considered non-GMO outside of Europe,” she said.

Charging up the nanotube

She and her colleagues tested nanotube delivery in other plants: tobacco, a workhorse of plant genetics; cotton, whose genome is notoriously hard to crack; and wheat. Genetically engineered versions of these plants are already on the market, but a simplified technique could speed the introduction of new and beneficial genes. Tobacco, for example, has been engineered to produce pharmaceuticals such as anticancer drugs. 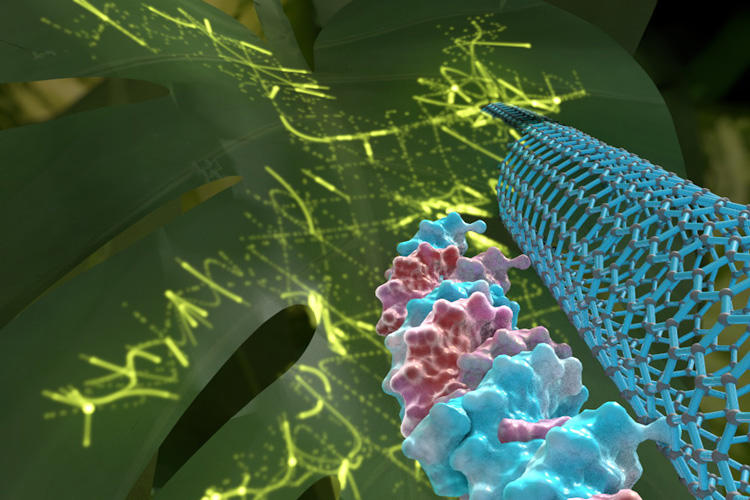 Image: A gene (blue and red) electrostatically attached to a carbon nanotube remains so tightly bound that it does not integrate into the plant’s genome. In most countries, genetically engineering a plant this way would not trigger a designation as GMO. In this image, an inserted gene coding for green fluorescent protein makes the leaves glow green. (Graphic by Ella Marushchenko)

Though Landry and her colleagues do not yet fully understand how nanotube delivery works, the easy entry of nanotubes is not a total surprise, she said. The cell walls of plants let things slip in easily if they are smaller than about 5 to 20 nanometers, which is much less than the 500 nanometer-size limit of mammalian cells. The nanotubes are about 1 nanometer in diameter, though they’re some 300 nanometers long: enough room to attach dozens of genes. Plant cells are on the order of 10,000 nanometers across.

She and her lab colleagues tried various techniques for attaching DNA to nanotubes and found that the tightest binding worked best. When the researchers gave the nanotube a positive charge before introducing the DNA, it stuck like paper to a comb charged with static electricity.

She is now conducting experiments with DNA origami nanoparticles to better understand what is happening inside the plant cells after the nanotube and DNA enter, and is experimenting with nanotube delivery into plants of other types of molecules, specifically RNA and proteins.

“The amazing thing about these carbon nanotubes is that they’re able to get past the cell wall and go into the nucleus or into the chloroplasts. It’s a novel advance that’s allowing us to really put in place the tools for genome editing,” said Brian Staskawicz, a professor of plant and microbial biology and the scientific director for agriculture of the Innovative Genomics Institute, which is funding further work on CRISPR delivery by Landry and her team. “The next steps would be, can we deliver ribonucleic proteins or can we deliver mRNA or DNA that would actually encode CRISPR-Cas9?”

In addition to Landry, other co-authors of the paper are Gozde Demirer, Huan Zhang, Juliana Matos, Natalie Goh, Francis Cunningham, Younghun Sung, Roger Chang, Abhishek Aditham, Linda Chio and Myeong-Je Cho, all of UC Berkeley. Landry is also an investigator in the Chan Zuckerberg Biohub and a member of the California Institute for Quantitative Biosciences. The work was supported in part by the U.S. Department of Agriculture.