A mouth full of microbes: UC Berkeley researchers discover compound that can cause tooth decay 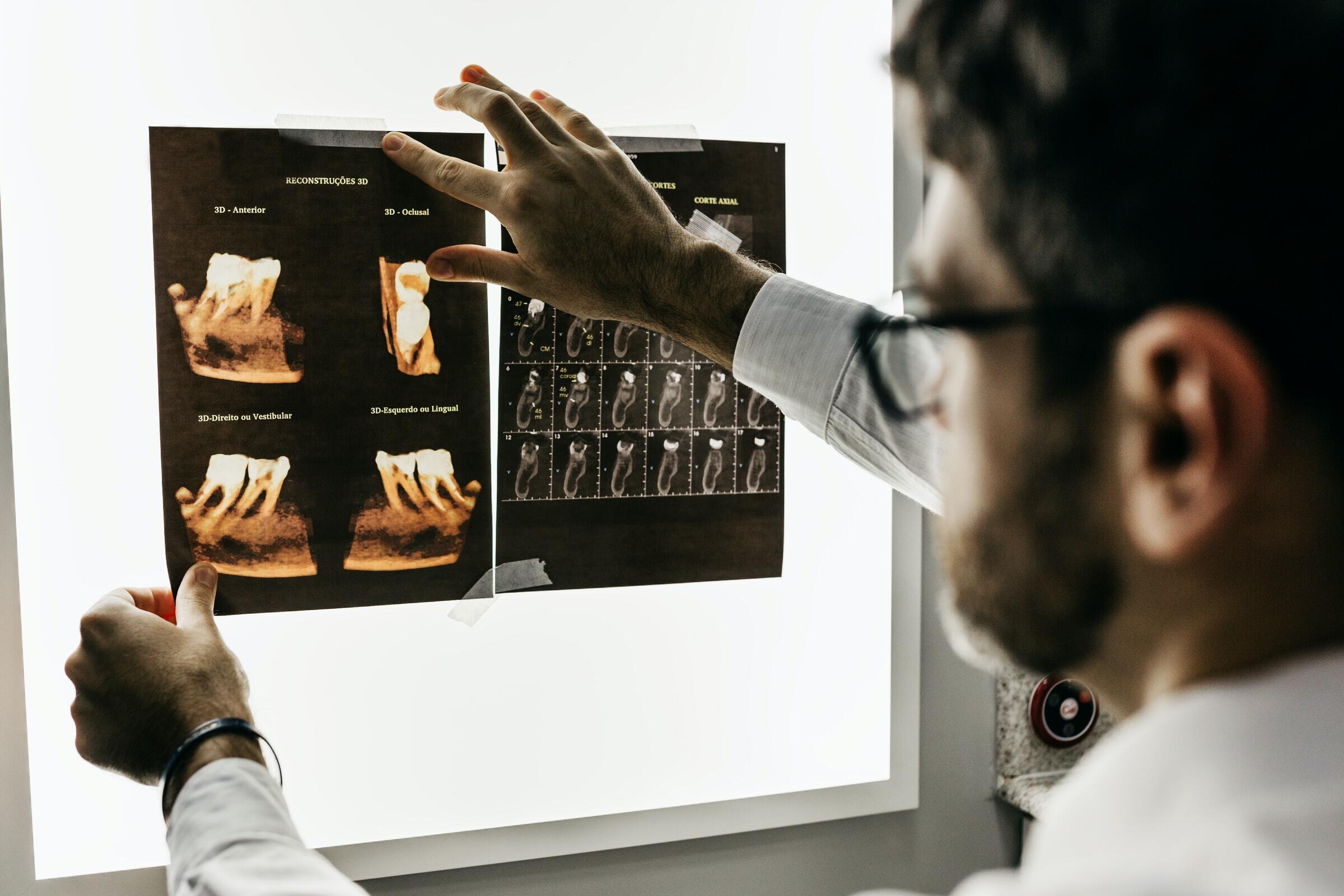 UC Berkeley researchers have discovered a compound that promotes bacterial adhesion on teeth, which can lead to dental plaque and cavities. Photo courtesy of Jonathan Borba (Unsplash)

Oral diseases pose a major health burden to people in many countries. A World Health Organization report notes that oral diseases affect close to 3.5 billion people worldwide, with caries of permanent teeth being the most common condition. Globally, it is estimated that 2.3 billion people suffer from caries—also called cavities or tooth decay—of permanent teeth and more than 530 million children suffer from caries of primary teeth. Dental caries happen when plaque forms on the surface of a tooth and converts the free sugars contained in foods and drinks into acids that destroy the tooth over time.

In new research published in Nature Chemical Biology, chemical biologists in the lab of Chemical and Biomolecular Engineering professor Wenjun Zhang at the University of California, Berkeley, in collaboration with the Hong Kong University of Science and Technology, and the University of Florida, have discovered a compound named mutanofactin-697 from 57 Streptococcus mutans clinical isolates from individuals of known dental caries status worldwide. This new compound is crucial in the development of cavities induced by Streptococcus mutans and may serve as a target in the prevention and treatment of dental caries.

Cariogenic Streptococcus mutans is one kind of bacteria that is known as a predominant etiological agent of dental caries due to its exceptional capacity to form biofilms. Biofilms are slimy and sticky films created by the aggregation of microbes, which can lead to dental plaque. The compound mutanofactin-697 can promote bacterial adhesion and subsequent biofilm formation on teeth by increasing bacterial hydrophobicity. This discovery will facilitate further study of approaches to inhibit Streptococcus mutans-induced dental caries and potentially lead to improved tooth decay treatments.

“Our discoveries highlight the importance of a small compound in mediating critical processes, such as biofilm formation in human oral pathogens,” says Zhang, who led the team to discover mutanofactin-697, “and enable further mechanistic interrogation of mutanofactin-related chemical regulatory processes in human oral ecology and streptococci-induced dental caries incidence and prevention.” 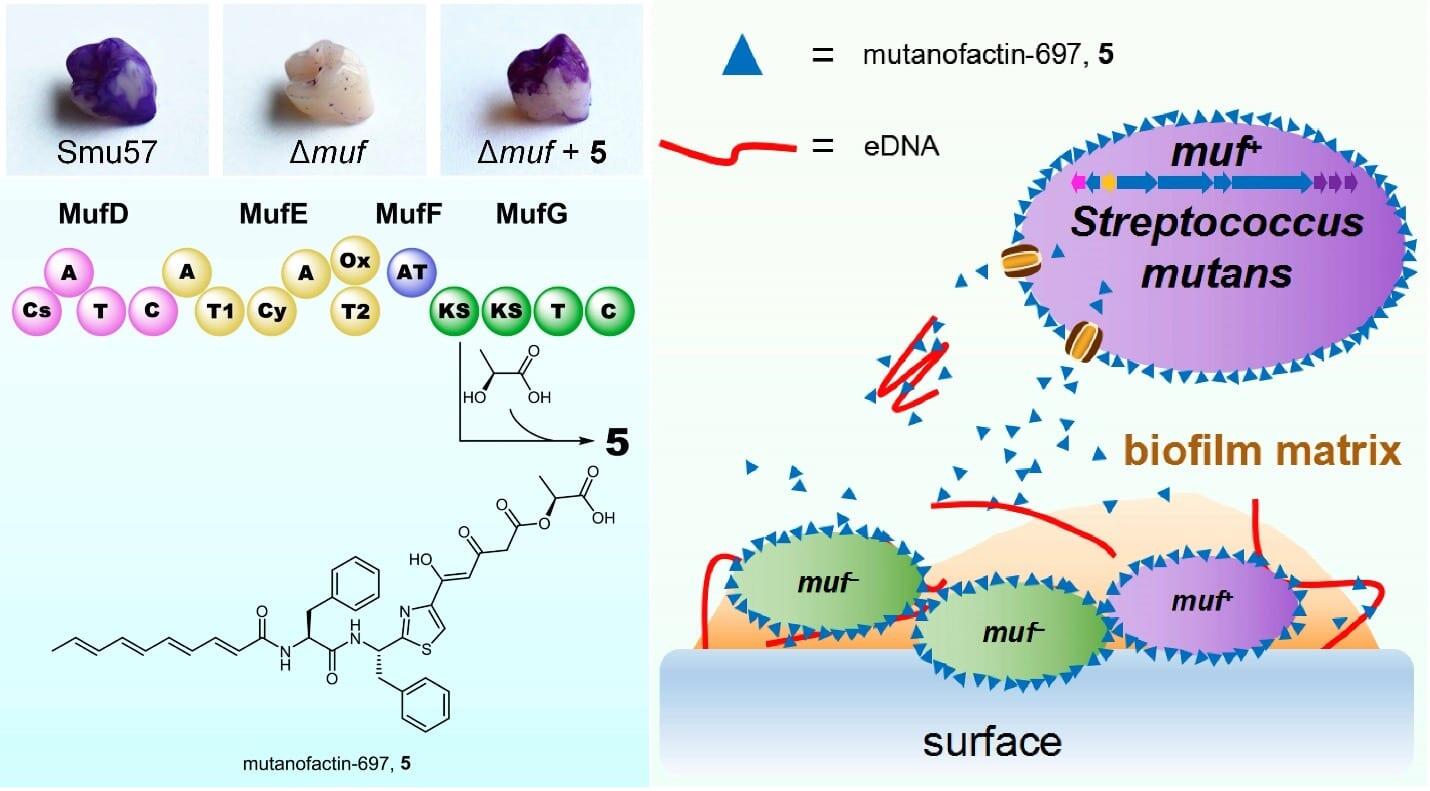 The biofilms on the acrylic resin artificial teeth are stained with crystal violet (top left). The biosynthetic gene cluster and structure of mutanofactin-697 are shown below the model teeth. On the right, it is a cartoon that displays the mechanism of biofilm formation by the compound. Image by Zhongrui Li, UC Berkeley.

“The process of this study is both inspiring and challenging,” says Zhongrui Li, a graduate student in the Zhang Lab. “We first screened the capability of biofilm formation of the 57 bacterial isolates and identified some of them to be much better than others at forming biofilms in the experimental environment. After extensive research, we then concluded the biosynthetic gene cluster, muf, in Streptococcus mutans contributes to a strong biofilm formation capability and mutanofactin-697 is the compound produced by muf.”

Biosynthesis is the production of complex molecules within living organisms or cells. A gene cluster is a group of two or more genes found within an organism’s DNA that encode similar proteins, which collectively share a generalized function. Thus, biosynthetic gene clusters are the genes working together to produce a complex compound in living organisms. “We are thrilled to publish this discovery and hope it will be useful in the future dental treatment,” Li says.

Mutanofactin-697 is very hydrophobic, meaning that it dislikes water. Owing to this property, it tends to bind to cells and increase the hydrophobicity of cells, causing the aggregation of cells and adhesion of cells to teeth.

In addition, Mutanofactin-697 also binds extracellular DNA (DNA located outside cell membranes) to work synergistically to facilitate the biofilm formation. More surprisingly, this compound can be utilized by other strains lacking muf, which means that these strains cannot produce Mutanofactin-697 by themselves, to form biofilms.

“The most difficult part of this study is to accumulate enough compounds,” says Li. “We can only obtain 4 milligrams of the compound from 20 liters of fermentation culture.” The study not only demonstrated the capability of biofilm formation at the macroscopic level, but also studied the reasons and logic behind this in a molecular and quantitative way.

“Elucidating the molecular underpinnings of oral biofilm formation allows one to identify new targets to inform the design of preventatives and treatments not only for dental cavities but also for biofilm-mediated processes such as chronic wound infections or biofouling,” says William Wuest, a professor in the department of chemistry at Emory University, described the significance of this discovery in "News & Views" in Nature Chemical Biology.