John Hartwig: The 2019 Wolf Prize and the importance of fundamental research in the discovery of synthetic catalysts 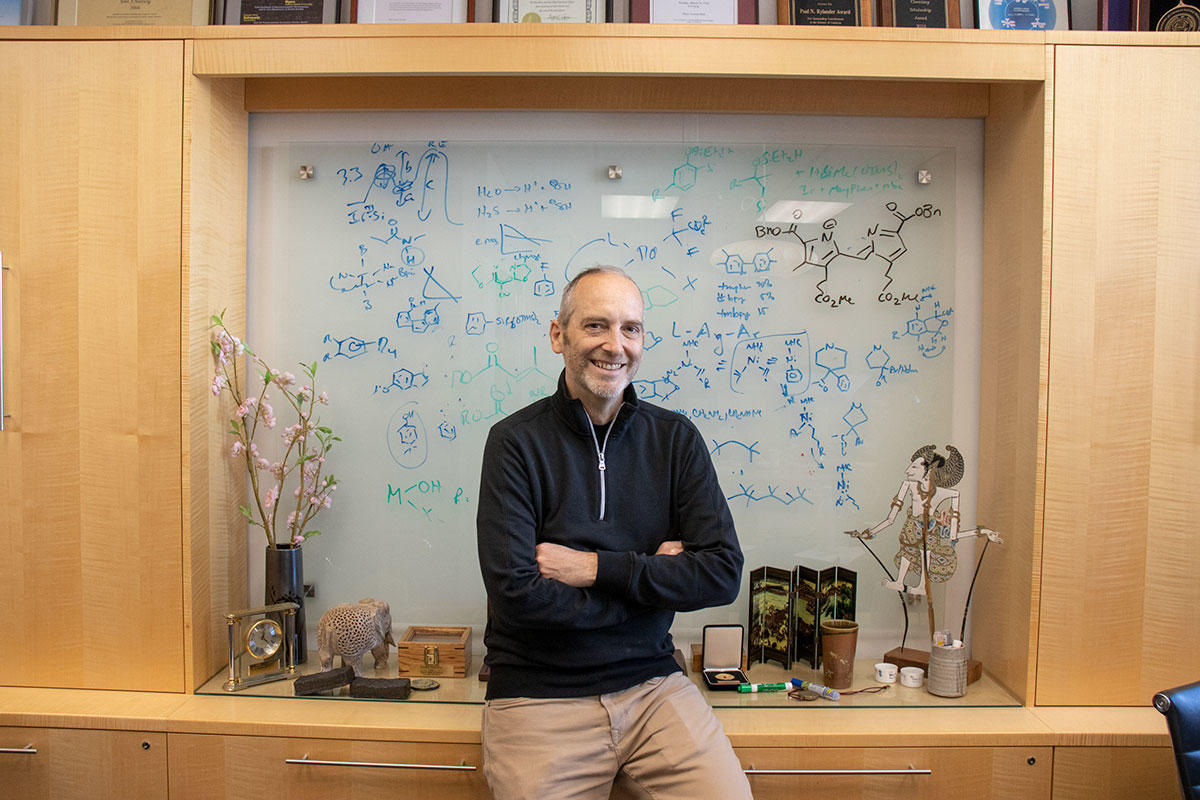 Often as synthetic chemists, we discover reactions that are useful but might be equivalent to a new shade of red or blue paint. It turns out that the reaction independently discovered by Steve Buchwald and me is more akin to finding a new primary color.
John Hartwig, 2019

John Hartwig (Ph.D.’90, Chem), is the Henry Rapoport Professor in Organic Chemistry at UC Berkeley. He joined the senior faculty at the College of Chemistry in 2011. His research group is focused on the discovery and understanding of new reactions of organic compounds catalyzed by transition metal complexes and artificial metalloenzymes. Among the many potential applications are catalysts for pharmaceuticals, renewable chemicals, and fuels.

Hartwig did his graduate research at UC Berkeley with advisors Robert Bergman and Richard Andersen. At the time, they were studying the reactivity of transition-metal compounds which was a new area in 1986. He focused his research on the synthesis, transformations, and reaction mechanisms of complexes containing ruthenium-carbon,  -nitrogen, and -oxygen bonds during his graduate work. After a postdoc with Stephen Lippard at MIT, studying new analogs of cisplatin he began his first faculty position as an assistant professor of chemistry at Yale University.

At that time, Hartwig, and Stephen Buchwald of MIT, each independently started research that would become the Buchwald-Hartwig Amination process — a palladium-catalyzed cross-coupling reaction of amines with aryl halides that results in the formation of carbon-nitrogen bonds. Both team’s research was inspired by the first example of a palladium catalyzed carbon-nitrogen cross-coupling reaction reported in 1983 by Masanori Kosugi and Toshihiko Migita, et al.  Hartwig’s initial paper provided the first information on the mechanism of cross coupling to form C-N bonds and improved rates with the isolated Pd[P(o-Tolyl)3]2 as catalyst.

In 1992, Hartwig had received a Dreyfus Foundation Faculty Award which allowed him to pursue research on the earlier findings. His first results were published in a June 1994 paper. He states, “The Dreyfus funding allowed us to do fundamental research that eventually generated a process which is currently one of the 20 most used reactions by medicinal chemists. I believe over 100,000 pharmaceutical candidates have been produced using it. When I first started researching the palladium-catalyzed carbon-nitrogen cross-coupling reaction, I wasn’t aware of how important it was going to be. My original interest was largely about the reaction mechanism.”

In August of 1994, Buchwald published research from his lab that was also an extension of the Migita paper, offering two major improvements over the original research. First, transamination of Bu3SnNEt2 followed by argon purge to remove the volatile diethylamine allowed extension of the methodology to a variety of secondary amines and primary anilines. Secondly, the yield for electron-rich and electron-poor arenes was improved via minor modifications to the reaction procedure (higher catalyst loading, higher temperature, longer reaction time).

The two labs went on to publish a contiguous set of papers between 1994 and the late 2000s that established the scope of the reaction. Their ongoing research pushed the science forward several generations, allowing for greater advancement in defining coupling partners and milder processing conditions. “I am pleased at the impact this reaction has had on human health, electronic materials, and even components of catalysts for other reactions, and that scientists are even working to make this coupling reaction greener. There have been a series of papers published in the last few years on innovative ways to do so,” notes Hartwig.

In a press release issued in January by the Wolf Foundation in Israel, it was announced that Hartwig and Buchwald had been jointly awarded the 2019 Wolf Prize in Chemistry for “independently harnessing cross coupling for the making of carbon-heteroatom bonds."

The Foundation noted, “These bonds and especially the carbon-nitrogen bonds are immensely important, because such bonds constitute a very basis of medicinal chemistry. Thus, the two laureates have pioneered the development of transition metal catalyzed procedures that are broadly applicable and allow carbon-heteroatom bonds of all sorts to be formed with previously unknown efficiency and precision.

“In so doing, Professors Buchwald and Hartwig have profoundly impacted the practice of organic synthesis in general and medicinal chemistry in particular. The transformative nature of their achievement has changed the way whereby ever-more-efficient drugs are discovered and eventually manufactured, for the extensive benefit of society today and in the future.  This breakthrough is the fruit of truly basic research and fundamental mechanistic investigations into ligand design and the elementary steps that transition metal complexes are able to entertain. These methodologies proved to be truly potent and represent, as such, a lasting legacy for the art and science of catalysis, and the prime justification for awarding Buchwald and Hartwig with the Wolf Prize for 2019.”

Hartwig also has conducted extensive research into selective catalytic functionalization of carbon-hydrogen bonds, including those in alkanes and complex biologically active molecules, the cross coupling of carbonyl compounds with aryl halides to form alpha-aryl carbonyl derivatives, a series of catalysts for the addition of amine nitrogen-hydrogen bonds across alkenes, and highly selective catalysts for the regio and enantioselective amination of allylic carbonates.  He published his 400th paper in 2018.

No stranger to discovering radically new science, in 2016 he, along with Douglas Clark, GN Lewis Professor and Dean of the College of Chemistry, and then-graduate student Hanna Key and postdoc Pawel Dydio, published their first research on “bionic enzymes.”  The team had successfully joined chemistry and biology to create brand new reactions. They did it by replacing the iron found in the muscle protein myoglobin and in the liver enzymes cytochrome P450s with iridium, a noble metal normally not found in living systems. This led to chemical reactions catalyzed by these artificial enzymes to convert a carbon-hydrogen bond to a carbon-carbon single bond, a transformation with no known natural counterpart. 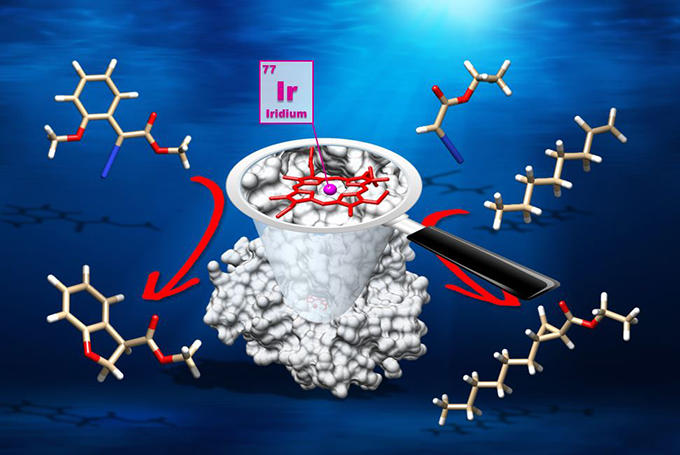 Graphic of artificial metalloenzyme. Within the protein (grey) is a porphyrin (red), a component of natural heme proteins, with iridium as the active site (purple). The enzyme converts the molecules at the top to those at the bottom by reaction at a carbon-hydrogen bond (left) and carbon-carbon double bond (right), respectively. (image courtesy of John Hartwig Group/Berkeley Lab and UC Berkeley)

“We were able to blend two different types of catalysts in a way that had not been done before,” said Hartwig. “By doing so, we have opened the door to the possibility of converting both simple and complex structures, including natural products and components of biomass, to single products, such as drugs that can treat human disease. Because the scope of catalysis in the chemical industry is so broad, this discovery could have an impact on molecules impacting every aspect of our lives. The long-term potential of this approach is vast.”

He comments, “I was talking with a friend recently who is an attorney. He said to me, 'I don’t think I’ve ever discovered anything at work. You seem to discover things all the time.' Doing science is all about discovery. Scientists spend a lot of time thinking about problems and turning them into questions that can be researched in the lab. But it takes time, and some amazingly creative people, to turn the questions into ‘good findings.’ You try to do the best work you can so that you can take it to the next step.”

In 2018, Hartwig was invited to present at the fifth biennial Dreyfus Teacher-Scholar Symposium in New York.  In his talk entitled: “Accelerating Chemical Synthesis with Catalysis,” he discussed the discovery of the Buchwald-Hartwig Amination process along with more recent research. You can view it online here>