Exploring the superheavy elements at the end of the periodic table 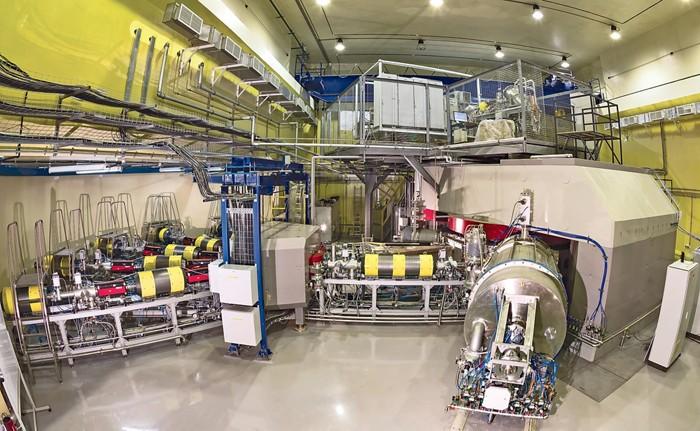 The new facility at the Flerov Laboratory of Nuclear Reactions in Dubna, Russia, will be used only for superheavy element research. Photo credit: JINR

On a stage in the United Nations Educational, Scientific, and Cultural Organization headquarters in Paris, Yuri Oganessian holds a microphone in one hand and a small remote control in the other. Over the next 20 minutes, a hushed auditorium listens as he describes how the periodic table of elements has grown. To date, 118 elements currently populate it. The heaviest of those, oganesson, was named after Oganessian himself.

But during the talk, which took place in January at the launch of the International Year of the Periodic Table, Oganessian says, discovering the superheavy elements (SHEs) with proton numbers 104 and above has been like opening Pandora’s box. Many unexpected problems have poured out, he says, some that are perhaps more difficult to solve than making SHEs in the first place. The discovery of these newer elements has prompted scientists to ask not just whether even heavier elements can be made but also what the chemical properties of the SHEs already discovered are and how to measure the properties of individual atoms of such short-lived species.

Although the scientific community has assigned these heaviest elements to their own spots on the periodic table, there is still a lot we don’t know about them. For example, what do the nuclei of these elements look like? What are their most stable isotopes? How do relativistic effects change their electronic structures? And what does that mean for their reactivity?

These questions prompted the Flerov Laboratory of Nuclear Reactions (FLNR), the institute where Oganessian is scientific leader, to build a new SHE factory in Dubna, Russia. The factory officially opened in March, and as C&EN went to press, checks were underway, before the facility starts two 50-day experiments. Unlike other particle accelerator facilities, which also perform additional physics experiments or create isotopes for medical treatments, the DC280 cyclotron has been built solely to probe the superheavies.

The goal of the new SHE factory is not just to produce new elements but also to make more stable isotopes of the elements that already exist and to improve the yields of SHE production. “We’re incredibly lucky,” says Patrick Steinegger, a chemist at the FLNR. He and his colleague Nikolay Aksenov are excited that the new machine might produce orders of magnitude more nuclei than existing machines do. Currently, it takes days or weeks to produce each nucleus for a given study, so a more productive facility could significantly accelerate SHE research.

But the FLNR researchers aren’t the only ones trying to characterize the properties of these new elements. Around the world, a friendly rivalry exists at particle physics sites as chemists and physicists try to better understand the superheavies.

To study these elements, researchers need to make them first. All elements, light or heavy, are made through nuclear reactions. Or were at some point. For most of the periodic table, these reactions take place in stars and supernovas. For the superheavies, chemists have to run the reactions.

“Every chemistry experiment starts as a nuclear physics experiment,” explains Christoph Düllmann, head of SHE chemistry at the GSI Helmholtz Center for Heavy Ion Research just outside Darmstadt, Germany. At the FLNR or GSI or any of the other laboratories that study SHEs, the reaction takes place in a particle accelerator that can collide nuclei at exactly the right speed—for example, 10% of the speed of light. If you are lucky, maybe once a day one of these collisions forms a new element. To make oganesson, for example, scientists accelerated a beam of calcium-48 ions at a target coated in californium-249. Three successful collisions each resulted in one nucleus of oganesson-294 and three ejected neutrons.

When a successful collision takes place, what comes out the other side is a mixture. Along with the desired heavy nucleus, the beam contains neutrons, γ rays, and unreacted ions. Scientists remove these unwanted species from the product using magnetic or electric fields, and if the new nucleus survives long enough, it makes its way to a detector at the back of the equipment.

Researchers never get to directly observe the SHE. What they detect instead are the decay products as the nucleus rapidly spits out α particles—two protons and two neutrons. For example, when element 118 decays, it releases an α particle and turns into element 116, which becomes 114, and so on before eventually becoming a more stable element. That decay chain is what allows scientists to identify, retroactively, which element they’ve created. 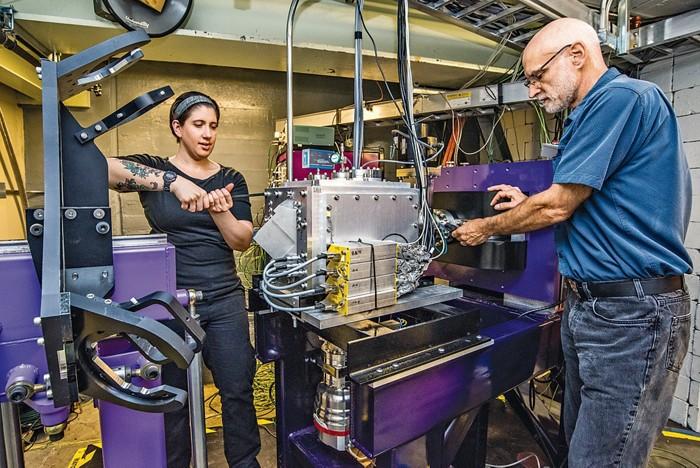 For a new element to be accepted by the scientific community and eventually named by the International Union of Pure and Applied Chemistry, scientists just need evidence that they made it. Characterizing the properties of the element isn’t required. Some researchers have criticized this process, suggesting that the most recent elements were approved too quickly. But the scientists that C&EN spoke with accept that the elements are what has been claimed. “It’s a lack of direct proof in many cases,” Düllmann says. “But I know of nobody who would doubt those elements.”

Now chemists and physicists are starting the hard work of determining the physicochemical properties of these short-lived and incredibly rare species. And that often involves atom-at-a-time chemistry. Some isotopes of the SHEs have survived long enough for researchers to make chemical compounds. For example, researchers have made halide and oxyhalide compounds of some SHEs. And a team including Düllmann created a carbonyl complex of seaborgium, element 106 (Science 2014, DOI: 10.1126/science.1255720). These compounds seem to confirm that elements 104, 105, 106, and maybe 108 behave like transition metals, albeit with slightly different electronic energy levels due to relativistic effects.

Back in Dubna, Steinegger and Aksenov are excited by not just what they might learn with the new device but also how other collaborators might come and use it. “We have so much work to do,” Aksenov adds. “We have to characterize all these elements!”

Düllmann agrees and argues that this basic research has great value, without the need to find applications. Applications will come, but they aren’t the focus of the field.

And what about pushing the periodic table’s limits and discovering elements 119 or 120? Scientists are developing new methods to try to make them, but researchers expect the elements will be too short lived for anyone to do much chemistry with them. Such elements might introduce g orbitals that will be interesting for chemists to explore, but, Düllmann says “We’ll be long dead by the time that’s possible.”

These relativistic effects are why some researchers think the organization of the periodic table might need some tweaking. The superheavies might not behave like their lighter homologs. And that’s one of the reasons that scientists are so keen to understand the properties of the elements they have created.

It could be that the properties of the SHEs do not match those of elements above them in the periodic table, says Michael Block, who studies the physical characteristics of the new elements at GSI. Some researchers around the world argue about how the periodic table should be arranged as the periodicity of the table breaks down. Should the organizing factor be proton number, electronic structure, or the elements’ properties?

Arranging the periodic table by elemental properties is tempting, but it requires chemists to characterize those properties. For SHEs, that means making isotopes that are stable enough to characterize. Scientists haven’t done any chemistry experiments on them yet because either the isotopes don’t last long enough, or stable isotopes with more neutrons in them are difficult to make. An isotope must last for more than a second, Düllmann says, for scientists to probe the properties of an element or of its compounds.

So how do scientists characterize these elements? One approach is simple gas-phase chromatography. And although the element is gone in a flash, planning the experiment and analyzing data can take a lot of time. “For our first experiment on 114, we observed two atoms,” he says. It took “2 days to extract the value, and then we spent 2 years to put an error bar on it.”

After a target element comes out of the accelerator, air or a specific gas captures and funnels it through a capillary toward an array of solid-state detectors made usually with gold or quartz surfaces. The gas carries the SHE nucleus across the surface until the element adsorbs. Researchers can measure where the element is adsorbed by observing its decay. Comparing the adsorption positions of SHE nuclei and the nuclei of lighter elements in the same periodic table group allows the researchers to understand how the SHE interacts with the surface.

For example, in one experiment, radon travels to the end of a set of detectors, but lead doesn’t travel far at all. Element 114, flerovium, travels just a bit farther along the detector than lead but not as far as radon, suggesting that it bonds to a gold surface as its homolog lead does but that the resulting bond is weaker (Inorg. Chem. 2014, DOI: 10.1021/ic4026766). Aksenov and Steinegger have some results from similar experiments with element 113, nihonium, but its properties have proved trickier to pin down. In their most recent experiments, the element never made it to the detectors. Instead, they say, it seems to have adsorbed to the capillary that linked the accelerator to the detectors (Eur. Phys. J. A2017, DOI: 10.1140/epja/i2017-12348-8).

Researchers also want to understand more basic questions about the SHE nuclei, such as their mass and shape and how those properties affect their electronic structure.

In November 2018, researchers at the Lawrence Berkeley National Laboratory announced the first direct measurements of the mass numbers for elements 113 and 115, nihonium and moscovium (Phys. Rev. Lett. 2018, DOI: 10.1103/PhysRevLett.121.222501). That’s important, says Jackie Gates, who was part of that team, because “although the elements of flerovium to oganesson, 114 through 118, have been added to the periodic table, we have not experimentally confirmed either the number of protons or the number of neutrons in the systems.” 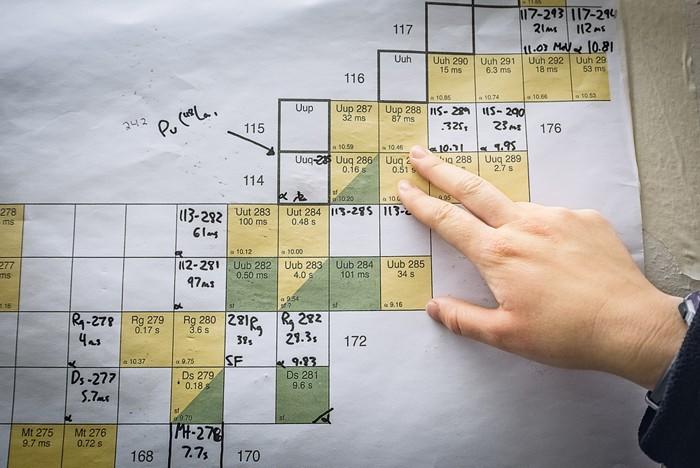 Scientists often estimate the mass of short-lived SHEs by adding up the decay products of the new elements. The Berkeley team used a newly built piece of equipment designed and run by Gates. The machine is known as FIONA, an acronym that means “For the Identification of Nuclide A,” where “A” represents the element’s mass number. The researchers added FIONA to the Berkeley gas-field separator that isolates the newly created elements from the unwanted reaction products in the facility’s beam.

FIONA first traps the SHE in a small volume of about 1 mm3 and then accelerates the SHE into magnets that deflect the moving ion and send it toward a detection station. When the SHE decays on the detector, it gives away its position. Researchers can use that position to work out what the nucleus’s trajectory was. Because the trajectory is linked to the nucleus’s mass-to-charge ratio, knowing where the nucleus is when it decays tells you the mass.

Scientists are developing other techniques to try to understand the nuclear and electronic structure of SHEs. For example, using pulsed laser systems to reveal exactly how finely split the energies of the elements’ different orbitals are and in turn help researchers understand the superheavy nuclear structures in more detail. X-ray spectroscopy experiments can also be done on these short-lived elements to confirm the atomic number.

A big step toward ‘green’ ammonia and a ‘greener’ fertilizer
END_OF_DOCUMENT_TOKEN_TO_BE_REPLACED