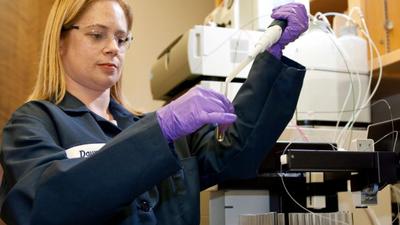 The periodic table is chemistry’s holy text. Not only does it list all of the tools at chemists’ disposal, but its mere shape – where these elements fall into specific rows and columns – has made profound predictions about new elements and their properties that later came true. But few chemists on Earth have a closer relationship with the document than Dawn Shaughnessy (Ph.D. Nuclear Chemistry, 2000), whose team is partially responsible for adding six new elements to table’s ranks.

Shaughnessy leads a team of real-life alchemists. You might be familiar with alchemy as a medieval European practice where mystics attempted to transmute elements into more valuable ones. But rather than turn the element lead into gold, Shaughnessy and her team turned plutonium into flerovium.

Shaughnessy’s parents encouraged her to pursue science from a young age – her father was an engineer, and she had an electronics kit as well as a chemistry set as a child. She’d first thought about doing orthopedic research but didn’t want to cut people open, she explained to me, and chemistry was a natural fit. But when she arrived at the University of California, Berkeley as an undergraduate, she learned that chemistry could be more than just mixing liquids in beakers. She could create the atoms themselves.

“It was like alchemy,” she told me. “Nuclear chemistry for me was really amazing, the whole idea that you could take things, put them together, and make something totally new out of it.”