BERKELEY, Calif. (KGO) -- A single image helped alert the world to a once-in-a-lifetime side effect of the COVID-19 crisis. It was a satellite map, showing a dramatic drop in pollution levels over China after the country began to effectively quarantine its population.

Shortly afterward, air quality researchers like Ron Cohen, Professor of Chemistry and of Earth and Planetary Sciences at UC Berkeley, predicted a similar effect here in the Bay Area. The EPA recently confirmed a more than one-third year-to-year drop in significant pollution levels around San Francisco.

"It's much bigger than drops of anything else we've ever looked at," said Cohen.

Cohen and his team have translated the numbers on one key pollutant, nitrogen dioxide, into a Bay Area version of the China map. Before-and-after images show NO2 levels dropping by roughly half in parts of the Bay Area from one week before the shelter-in-place order to the week after.

Cohen said a similar year-to-year drop helps confirm the effect wasn't a fluke of weather or other factors.

"There's tremendously less nitrogen dioxide in the atmosphere than there was before the shelter in place order," he said. 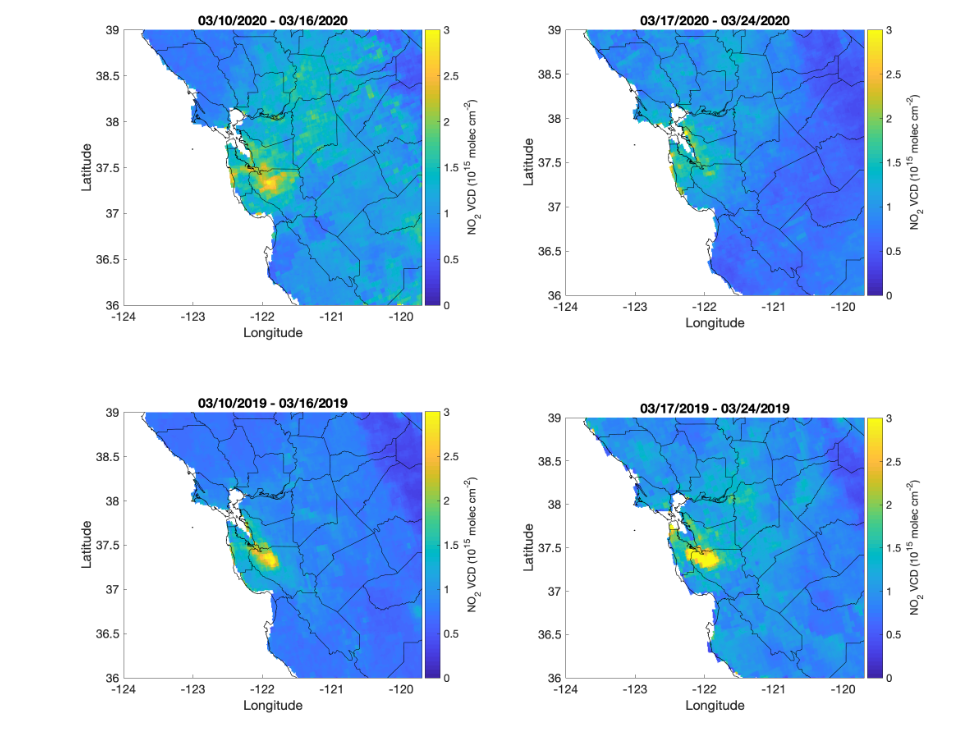 Maps show a side-by-side comparison in the drop of nitrogen dioxide in the Bay Area before and after the shelter-in-place orders in March 2020. Image: UC Berkeley.

Soon, he believes other key data will start to become more clear as well, allowing researchers to confirm not only how much pollution is in the air, but more precisely where it comes from.

"We think we know how much comes from cars, how much from trucks, how much from industry. And all of those things suddenly changed by different amounts. So we'll be able to check," Cohen added.

As specific industries potentially ramp down and back up again in the wake of COVID-19, a health and economic crisis could provide powerful discoveries about an environmental one.