A behind-the-scenes look at the longevity vitamin PQQ 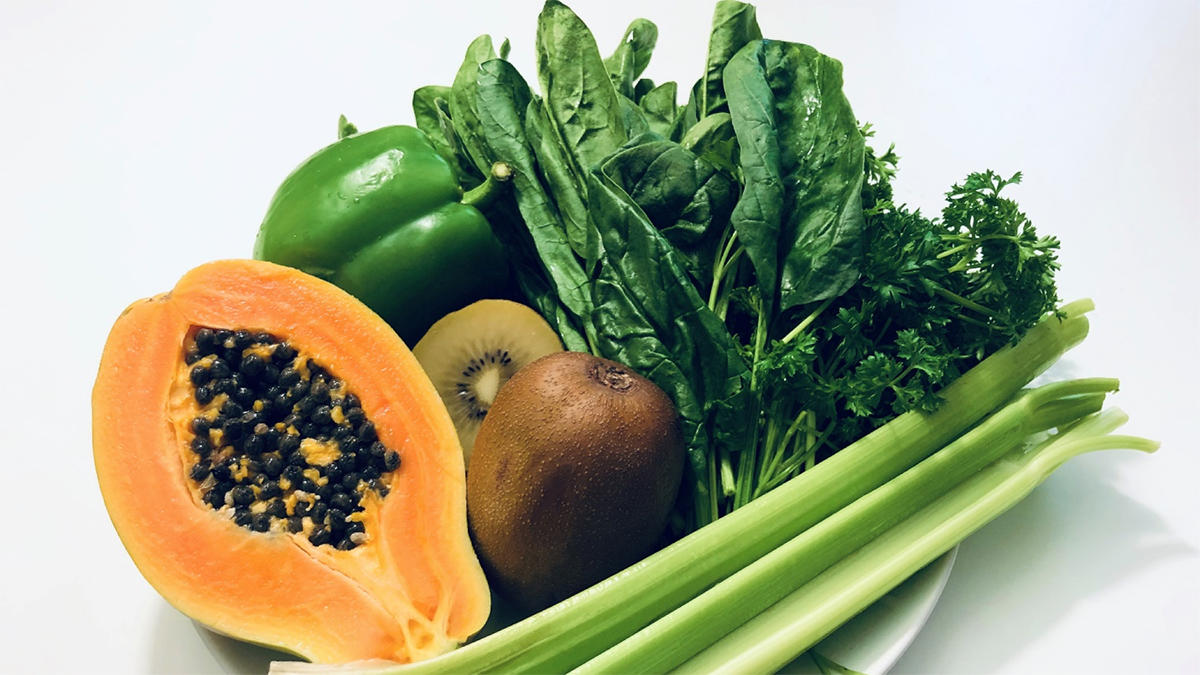 PQQ has been found in fruits and vegetables, such as papaya, kiwi fruit, spinach, green pepper, parsley, celery, and more. Photo: Wen Zhu.

We love food, not only for the joy of eating and sharing meals, but also for the nutrients that our bodies depend on to thrive. Beyond the essential vitamins that everyone needs regularly, scientists have found more substances—classified as longevity vitamins—that could promote a long healthy life. With the increase of life expectancy around the globe, the emerging concept of a longevity vitamin has brought one compound into public attention: pyrroloquinoline quinone (PQQ).

Judith P. Klinman, a Professor of the Graduate School and Chancellor’s Professor at the University of California, Berkeley, is currently leading a collaborative team of researchers expanding the horizon of the science of PQQ biogenesis. This month, researchers from Klinman’s lab published an in-depth study in the Journal of the American Chemical Society that demonstrates the unique structural and functional properties of PqqE, one of the key enzymes in PQQ biogenesis.

Many commonly known vitamins, such as vitamin C and vitamin B2, function as “redox-active” cofactors—a group of small molecules needed for catalyzing chemical conversions that drive the reactions happening in our bodies. Vitamin C, for example, is an antioxidant that participates in the redox cycle, helping to remove the toxic reaction by-products within the cell. Like vitamin C, PQQ is also an enzyme cofactor that has redox properties. Studies have shown that longevity vitamins, such as PQQ, may lower the risk of disease during aging, possibly via stimulating important cellular activities. Understanding how PQQ is made in nature helps to unlock the molecular basis of the beneficial effects of PQQ. It also leads to other potential applications, such as new treatment for bacterial infections.

“PQQ belongs to a class of quinone cofactors,” Klinman says. “There is a whole family of quinone cofactors, but in all of those instances, the cofactor directly connects to the protein; PQQ is a free-standing cofactor.” Bacteria produce PQQ for “digesting” alcohol and sugar to generate energy under certain conditions. For bacteria, producing PQQ is “a strategy to deliver electrons to electron transport chains that lead to ATP production,” which is crucial for bacteria survival. “There is an evolutionary benefit for bacteria to use PQQ,” Klinman says.

Although plants and animals do not make or directly use PQQ in the same way that bacteria do, researchers have found that PQQ promotes plant growth and improves mitochondria function and memory learning ability in animals. If a human cell is a city, mitochondria are the power station that generates energy for the city to be functional. Mitochondria dysfunction causes many diseases in the aging process.

“I think there is no question that PQQ does have some beneficial physiological effects for animals, and it might be related to the crosstalk between other redox-active molecules, such as ascorbate (vitamin C), ” Klinman says. “It turns out that ascorbate can easily interact with PQQ”.

Since vitamin C is constantly used by the human cell for growth and repair, if PQQ interacts with vitamin C in humans, it might play a role in the cellular activity where vitamin C is needed in an indirect way. Researchers have also found that PQQ regulates the activity of a human enzyme called lactate dehydrogenase, an enzyme participating in the process of energy production in many organs and tissues throughout the human body. More research on the molecular basis of the impact of PQQ in human health is still on-going. 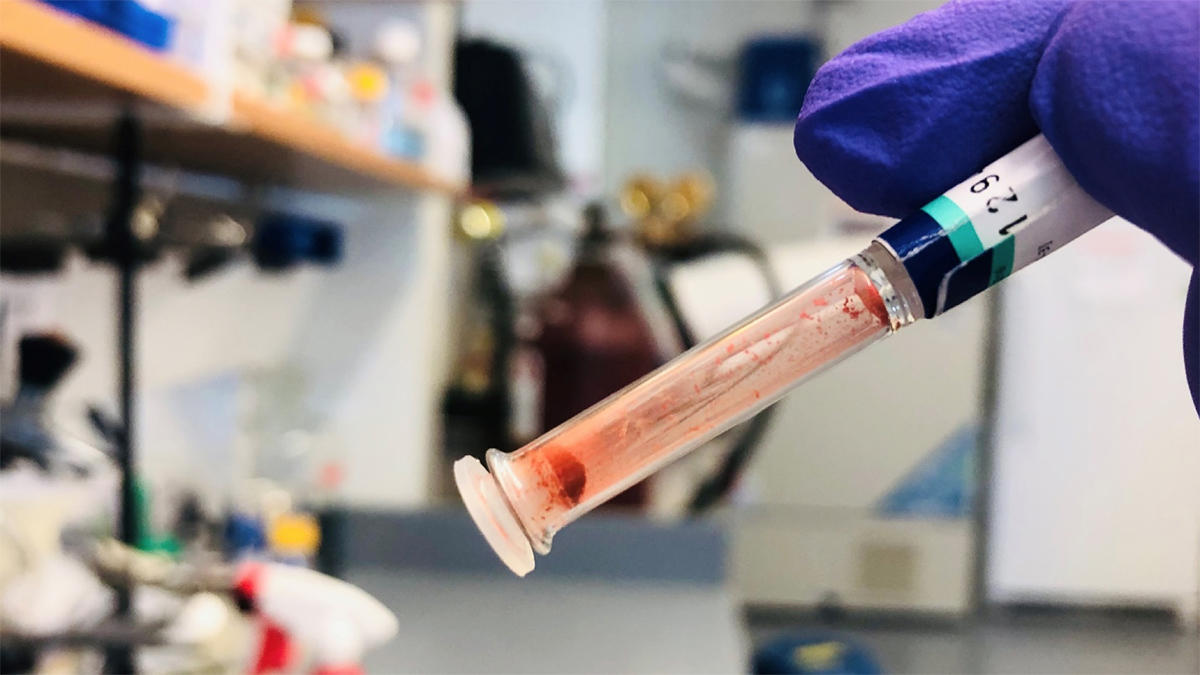 The orange-red powder in the glass container is PQQ. Photo is taken at the Klinman Lab in Stanley Hall at the University of California, Berkeley. Photo: Wen Zhu.

A recipe for PQQ

Although PQQ exists in fruits, vegetables, and human breast milk, only bacteria can produce PQQ. For almost two decades, Klinman has been working on uncovering the “recipe” that bacteria use to make PQQ.

What makes the PQQ biogenesis unique to other known cofactors is that it is derived from a peptide—a short chain of amino acids. At least six genes—pqqA, pqqB, pqqC, pqqD, pqqE, and pqqF—directly contribute to the formation of PQQ in bacteria. These genes are translated into a peptide and five proteins in bacteria. The peptide, PqqA, is the initial “ingredient,” and the rest of the proteins are the “tools” for making PQQ. Solving this “recipe” is not easy. It is like solving a puzzle without knowing the final picture; one has to figure out where to start and which step comes next.

So far, Klinman and her colleagues have illustrated the structure and function of all five proteins for making PQQ. “For me, what is really interesting is how unique the enzymes are in the PQQ biosynthetic pathway,” Klinman notes. The structure-function relationship of these five enzymes is “one of a kind” in their own protein families. For example, PqqB is an unprecedented iron-dependent hydroxylase in the b-lactamase family; PqqC is a rare enzyme example that conducts a powerful eight-electron oxidation without using any cofactors. Every enzyme in the pathway is “filled with surprises,” according to Klinman. In addition to that, the first step of PQQ biogenesis catalyzed by PqqE is oxygen-sensitive, while later stages in making PQQ require four equivalents of oxygen.

“PqqE is particularly hard to study, and you have to be very persistent working on it,” Klinman notes. The current hypothesis regarding the oxygen issue is that a sequence motif in PqqE may help protein survive an oxidative environment. “We still don’t know precisely how these proteins coordinate with each other to achieve this feature.”

Proteins used in the PQQ biogenesis study in the Klinman Lab show a variety of colors. Photos taken at the Klinman Lab in Stanley Hall at University of California, Berkeley. Photo: Wen Zhu.

“Generations of graduate students and postdocs have been working on this project to crack it open,” Klinman says. “There are many things we still don’t know.” Now, with more information in hand, researchers in Klinman’s laboratory are using a variety of tools to try to answer more questions about PQQ. “I am always interested in PQQ because it is what is called a ‘cell viability cofactor’ that gives an advantage to certain prokaryotic cells to boost up their viability by providing an alternative pathway for energy generation. We notice that PQQ biosynthesis appears in many opportunistic pathogens.” Using the structure and function information of the proteins in the pathway, such as PqqB and PqqC, “we really want to see if we can design drugs targeting PQQ biogenesis, for use as part of cocktail antibiotics for treating bacterial infections.”

PQQ biosynthesis can also inspire other cofactor discoveries. “It is intriguing to see more emerging examples like PQQ, where a peptide acts as a precursor substrate to make a new cofactor,” Klinman says.

The recent development in bioinformatics analysis and the NIH Human Microbiome Project may also benefit our understanding of the relationship between PQQ and human health. “There is all this research showing interactions between the central metabolism of human cells and the products from bacterial metabolism. There may be some evolutionary advantage for non-PQQ producers to use PQQ generated from prokaryotes that hasn’t been explored,” Klinman added. “We haven’t yet pursued that, but it is definitely an interesting direction to go in.”

Scientists are continuing to investigate how PQQ is made in various bacteria that are either beneficial or pathogenic to humans and to unlock the relationship between human health and PQQ in the foods we eat, even if, most of the time, we don’t realize we’re eating it.

This recent study on PqqE was published in collaboration with Sean J. Elliott, Professor of Chemistry at Boston University and R. David Britt, Winston Ko Chair and Distinguished Professor at the University of California, Davis. The work is supported by the National Institutes of Health and the National Science Foundation.

The author, Wen Zhu, is a postdoctoral researcher in the Klinman Lab at QB3-Berkeley, exploring the key steps in PQQ biogenesis aiming to unlock PQQ’s potential for health benefits.