Your weekend read: History of chemical engineering at Berkeley 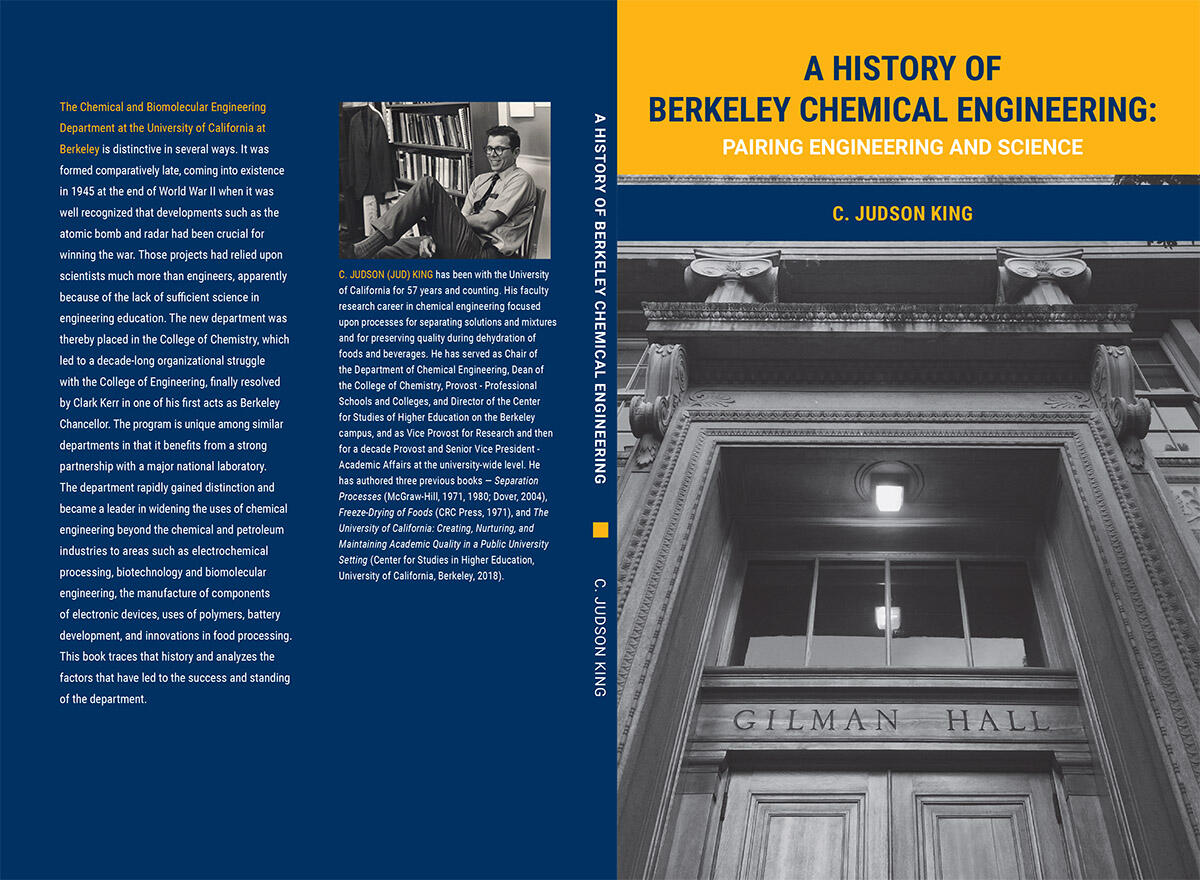 The College is pleased to announce C. Judson King's A History of Berkeley Chemical Engineering: Pairing Engineering and Science is now available on eScholarship, Berkeley's flagship scholarly repository, and as a print book from Amazon.com.

King takes a deep dive into the history of the department of Chemical and Biomolecular Engineering (CBE) which is distinctive in several ways. It was formed comparatively late at the University, coming into existence in 1945 at the end of World War II when it was well recognized that developments such as the atomic bomb and radar had been crucial for winning the war. At the time, those projects had relied upon scientists much more than engineers, apparently because of the lack of sufficient science in engineering education. The new department was placed in the College of Chemistry because of the influence of many chemical scienctists, which led to a decade-long organizational struggle with the College of Engineering, and was finally resolved by Clark Kerr in one of his first acts as Berkeley Chancellor.

Department Chair Jeff Reimer states, "Chemical engineering at Berkeley has been an iconic discipline for decades at UC Berkeley, giving birth to the notion of engineering as “the future practical” by sharing faculty intellectually, architecturally,  and administratively in a unique relationship with the chemistry department. I could not think of a better person to pen the score of this academic symphony than C. Judson King, longtime faculty member of the College and an administrative leader of the University who recently published a comprehensive overview of the history of the entire UC System."

CBE is unique among chemical engineering departments in that it benefits from a strong partnership with the Department of Chemistry and Berkeley Lab as well as other departments on campus. From its inception, CBE rapidly gained distinction and became a leader in widening the uses of chemical engineering beyond the chemical and petroleum industries to areas such as electrochemical processing, biotechnology and biomolecular engineering, the manufacture of components of electronic devices, uses of polymers, battery development, and innovations in food processing. The book traces that history and analyzes factors that have led to the success and standing of the department along with some of its stellar faculty and alumni.

C. JUDSON (JUD) KING has been with the University of California for 57 years and counting. His faculty research career in chemical engineering was focused on  processes for separating solutions and mixtures and for preserving quality during dehydration of foods and beverages. In service to the University, he has served as Chair of the Department of Chemical Engineering, Dean of the College of Chemistry, Provost - Professional Schools and Colleges, and Director of the Center for Studies of Higher Education on the Berkeley campus, and as Vice Provost for Research and then for a decade Provost and Senior Vice President - Academic Affairs at the university-wide level. He has authored three previous books — Separation Processes (McGraw-Hill, 1971, 1980; Dover, 2004), Freeze-Drying of Foods (CRC Press, 1971), and The University of California: Creating, Nurturing, and Maintaining Academic Quality in a Public University Setting (Center for Studies in Higher Education, University of California, Berkeley, 2018).