The Women Written Out of Nuclear Science 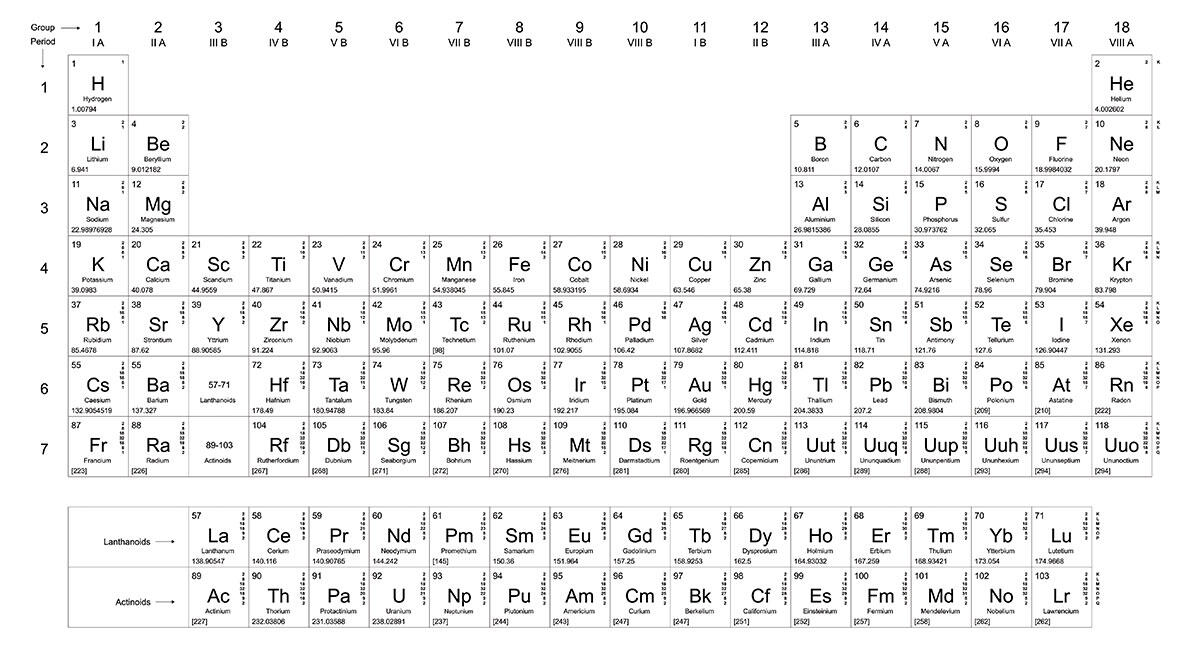 Illustration of the Periodic Table including the heavy elements. (Adobestock) 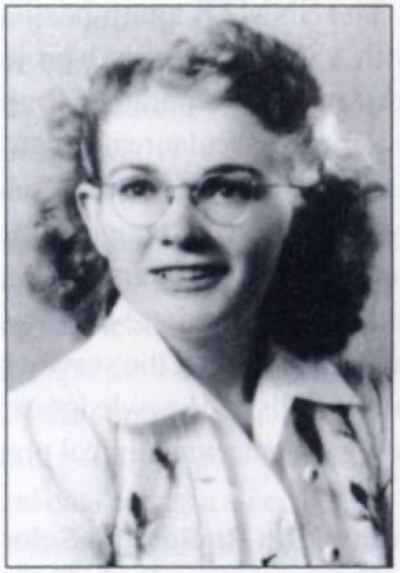 In 1969, Margaret Fuchs, an unassuming housewife and mom of three living in California, received a letter from the White House. It was a message from Glenn Seaborg, the Nobel-prize winning chair of the Atomic Energy Commission and personal adviser to President Nixon. The most famous chemist in the U.S. at the time, Seaborg was considered the world’s foremost authority in nuclear science. He had a question for Fuchs about caesium-137, a crucial radioisotope and a key marker for nuclear contamination around the world.

Fuchs read the message and sent her response. Her children were astonished. “My kids will never get over the thought that Glenn Seaborg had to ask anybody anything about radioisotopes,” she added as a postscript in her letter, “least of all their mother!”

Unbeknownst to her children, Fuchs had lived a previous life. She had not just studied caesium-137—she had discovered it.

Decades earlier, Fuchs had been present at the dawn of a new area of science: nuclear chemistry and physics. And yet with barely 80 years of history, focused in only a handful of countries, this modern area of research has still seen women working in the field face prejudice, exclusion, and harassment. The intense secrecy and security of the world of nuclear science has been used to minimize or overlook the work of its women scientists. Many women working in nuclear science have gone uncredited or under-credited for their work. And some were not allowed to do science at all.

Fuchs is just one example. In 1941 she was a 20-year-old chemistry undergraduate at the University of California, Berkeley. At the time, honor students such as Melhase needed a project in their final year, but she was struggling to find anything suitable. It was then a friend decided to introduce her to Seaborg, then an unknown researcher at the university’s Radiation Laboratory.

Little did Melhase suspect that she was talking to a scientist who had just made a world-changing discovery. A few months earlier, Seaborg and his team had secretly created a new element—plutonium—that would lead to the world’s first atomic bomb. Despite his commitments to the U.S. military, Seaborg assigned Melhase 100g of neutron-enriched uranium, and asked her to investigate it. Usually, when uranium is struck with neutrons it undergoes nuclear fission, breaking apart into lighter elements such as krypton and barium. Seaborg predicted that, inside the uranium, little more than a pile of rock, a new element waited to be found.

Melhase soon detected signs of something intensely radioactive in the uranium. In two weeks, she had isolated caesium-137, an astonishing feat for an undergraduate. Sadly, due to wartime secrecy, her discovery was repressed.

Further disappointment soon followed. Although she applied to graduate school at UC Berkeley, her candidacy was rejected by head of chemistry Gilbert Lewis solely based on her gender. Lewis was aware of her achievement and simply did not care; his justification was that he had once had a woman PhD candidate, who married shortly after defending her thesis and, therefore, “wasted her entire education.” Turned down by Berkeley, Melhase went to work for Seaborg on the Manhattan Project, but after the war, she was soon out of options. Unable to continue with her studies or secure a decent position without a PhD, she married a fellow Manhattan Project researcher and settled down. Science lost her prodigious talent. 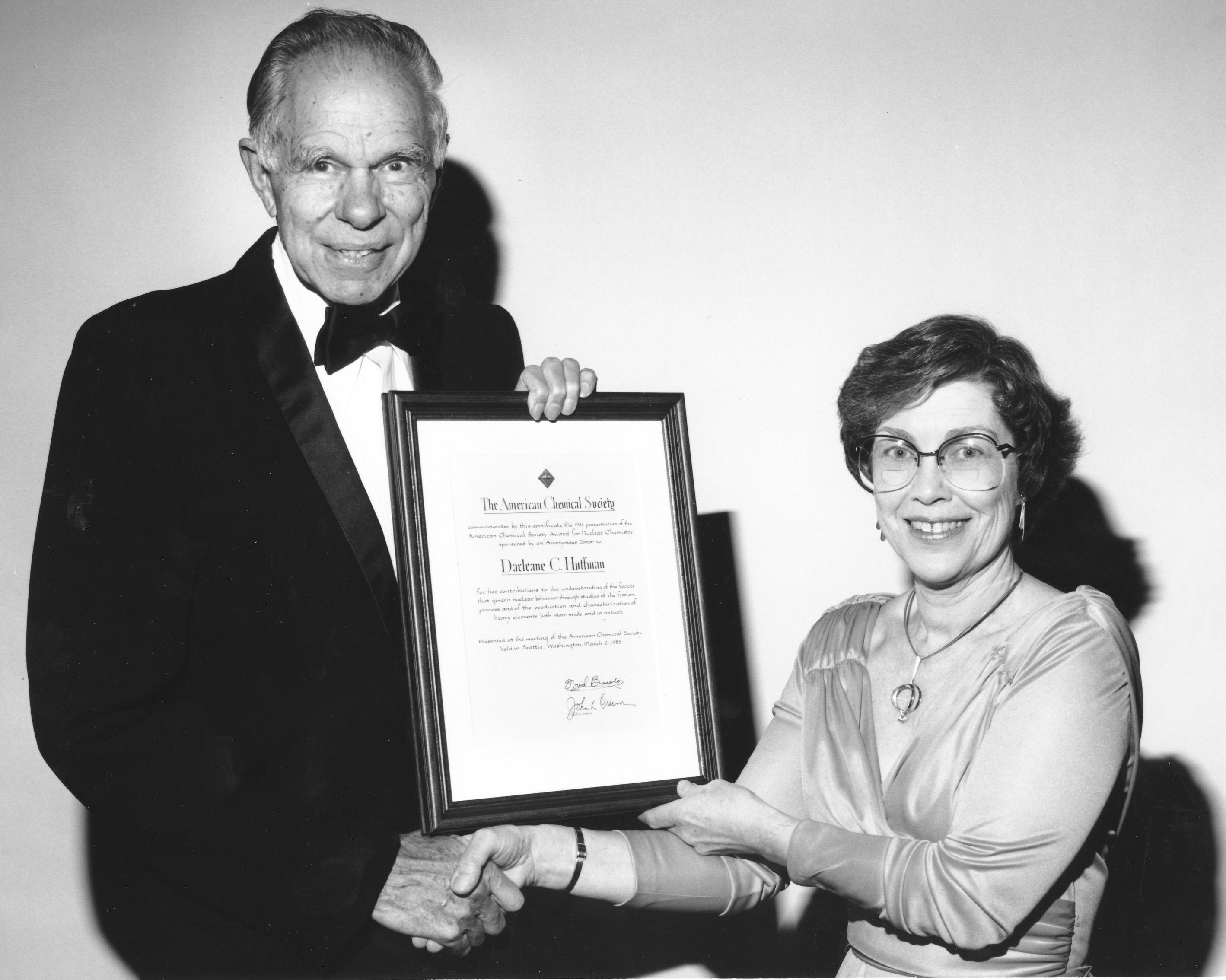 Fuchs’s story is far from alone in the annals of nuclear science, a world where security has, for a long time, been used to discriminate against women. Another egregious case is that of Darleane Hoffman (née Christian) who was deprived of a place in scientific history simply because of her gender. In 1952, Hoffman arrived at Los Alamos Scientific Laboratory to take over the nuclear chemistry section. On arrival, the human resources department refused her entry: “There must be some mistake,” she was told. “We don’t hire women in that division.”

Hoffman had been fighting against gender discrimination for years. As an undergraduate, she had been inspired to change her major to chemistry. Her advisors had tried to dissuade her, insisting she would not be allowed to marry if she became a chemistry teacher, unable to imagine she might instead be a researcher. When her father died and she requested time off for the funeral, she was forced to take an on-the-spot test scheduled for the class she missed. At one point, she was denied access to the campus lab on the spurious grounds that she lacked a middle initial for her ID. In 1952, despite her talent with nuclear material, she could not even get into the laboratory at Los Alamos as a team leader. It took three months, a chance meeting with a staffer at a cocktail party, and Hoffman calling in the FBI to help locate her laboratory pass that mysteriously went missing before she was finally able to obtain clearance to the lab.

Sadly, for Hoffman, it was too late. While she was stuck at home, two new elements were detected in the nuclear material analyzed by her team. “I missed being a discoverer of einsteinium and fermium … while I was sitting in a small apartment in Los Alamos raging against the system,” she later wrote in “The Transuranium People.” “I will never again trust personnel offices, not just for saying ‘we don’t hire women in that division,’ which was untrue, but for their general insensitivity, incompetence and bias.”

Hoffman went on to have a glittering career, so much so that for years Seaborg, her senior, kept her photo on his office wall as a source of inspiration. In 1971, she became the first person, along with fellow researcher Francine Lawrence, to discover plutonium on Earth dating back to the solar system’s formation. In 1974 she was head of the U.S. team that was tasked, with their USSR counterparts, on deciding who had discovered elements 102–106 during the Cold War. Later, she was appointed head of Lawrence Berkeley National Laboratory’s particle accelerator team. There she would come agonizingly close to discovering an element again, only to realize a staff member had faked the data and the supposed atoms found by her team were a hoax.

It would be easy to dismiss the struggles of women in nuclear science as products of a bygone era of sexism and prejudice. Today, women work in all aspects of nuclear science. Indeed, the most successful element discovery team of the 21st century—the collaboration between Lawrence Livermore National Laboratory in the U.S. and the Joint institute for Nuclear Research in Russia—is currently being co-led by Dawn Shaughnessy, who has discovered five elements. And yet biases persist. 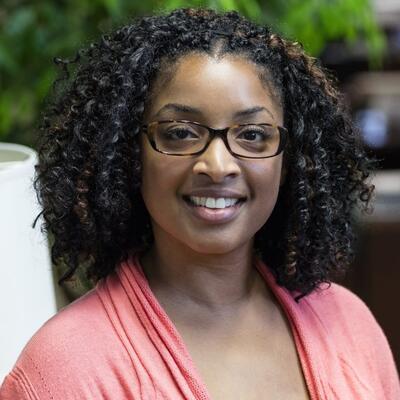 The story of Clarice Phelps (M.S. Mechanical Engineering, UT Austin; currently a graduate student in Nuclear Engineering at U. Tennessee) is one such example. A Tennessee native and U.S. Navy veteran, Phelps works at Oak Ridge National Laboratory’s High Flux Isotope Reactor, in Knoxville, where she performs meticulous separations to isolate elements created in the reactor’s nuclear forge. In 2008, Phelps helped isolate and purify a small, 22mg sample of berkelium, element 97. This was then shipped to Russia, where Shaughnessy and her colleagues fired a calcium beam into it, creating the most recently discovered building block of our universe: tennessine, element 117.

In playing her part, Clarice Phelps had become the first Black woman credited with the discovery of an element (and the second Black scientist of the modern era, after James Harris). To recognize her place in science, academic Jess Wade created a Wikipedia page in her honor in September 2018. In February 2019, it was deleted; the Wikipedia editors had decided her achievement was “not notable.” Worse, because of the secretive nature of nuclear science, the editors deemed there were too few independent sources to prove beyond doubt Phelps had played an essential role in the discovery of tennessine.

A furious debate began, featuring opinion pieces in The Washington Post and scientific magazines as to whether Phelps’ contribution should be recognized. It was finally restored in January 2020.

The fate of these three researchers is reflective of the wider patterns seen for women in science: not all of them have happy endings. Margaret Fuchs’ story was only told in 1994, and her credit as the discoverer of caesium-137 was almost lost to history. She died in 2006; by then, Cs-137 had become famous not only as an isotope for medical procedures and well logging, but also the main marker for the extent of the Chernobyl nuclear reactor disaster.

Darleane Hoffman is now in her 90s and retired in California; despite her close calls, she never got the element she deserved.

Of the trio, only Phelps got the recognition she deserved. She still works in nuclear science and is completing her PhD at the University of Tennessee, Knoxville. She remains a passionate advocate for increasing representation in science and is currently isolating yet more targets to discover new elements on the fringes of the periodic table.

Despite their incredible accomplishments, Melhase, Hoffman and Phelps were all on the verge of being written out of history. Their stories are not just an important reminder of the difficulties faced by women in science; they are illustrations of how prejudices and bias can force talented individuals out of research to the detriment of us all.

This article originated here and is published by permission of the author and Lady Science.