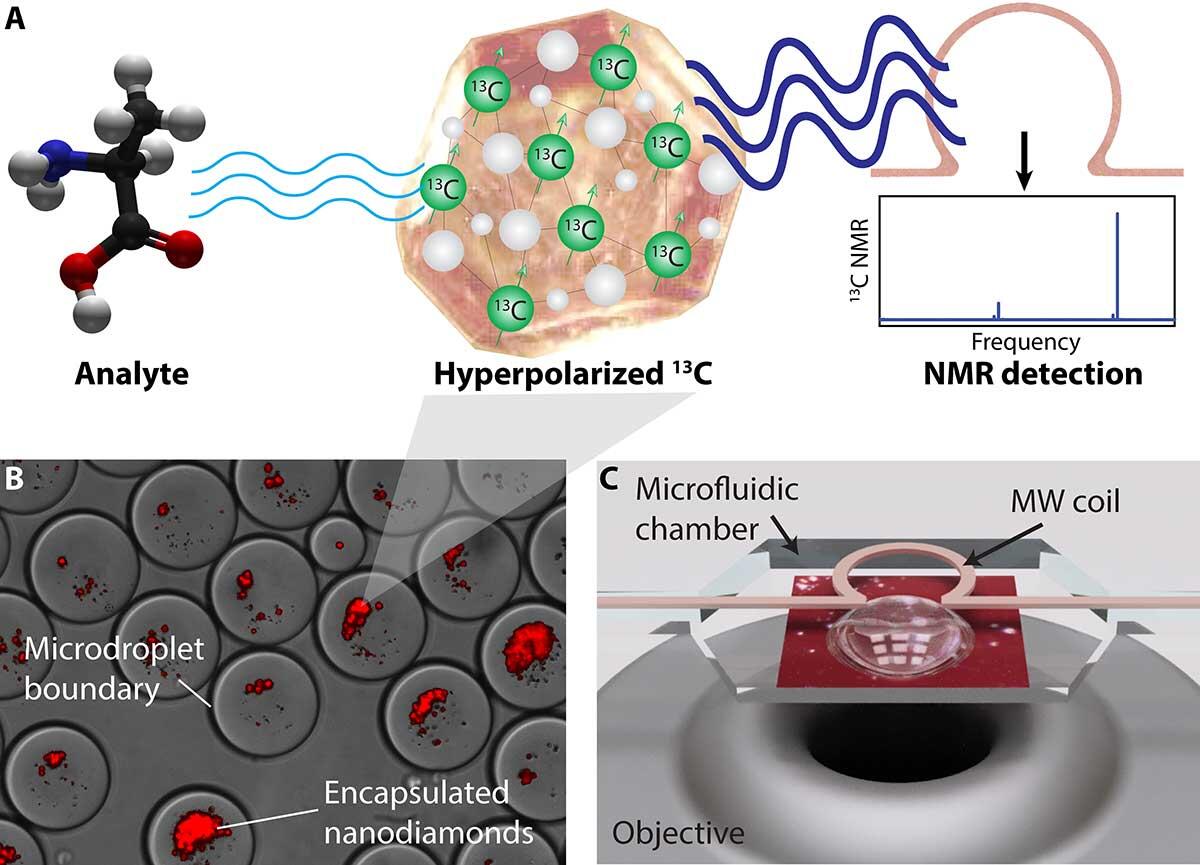 The College of Chemistry is pleased to announce that Assistant Professors of Chemistry Ashok Ajoy and David Limmer were recently awarded a $1M grant from the W. M. Keck Foundation’s Research Program in Science and Engineering. Their project aims to develop deployable nanoscale sensors for relayed nuclear magnetic resonance (NMR) chemical sensing, and use these sensors to investigate the acceleration of chemical reactions inside micron-scale compartments. Dr. Kevin Wilson (Ph.D. '03 Chem), a senior staff scientist in the Chemical Sciences Division at Lawrence Berkeley National Laboratory, is also a co-principal investigator on the project. Dr. Wilson will contribute to theoretical and computational methods which translate the data from the deployable NMR sensor into a model for the accelerated chemical kinetics inside microfluidic droplets.

Chemical reactions in micron-scale compartments, including droplets, films, and emulsions, proceed up to a million-fold faster than the same reactions in macroscopic beakers. However, the mechanism by which micro-confinement substantially changes the kinetics and equilibria of reactions, including peptide bond formation and other reactions inside cells, remains less understood. Unraveling the mechanisms of these effects will have far-reaching fundamental and technological impacts, but to do so will require a chemically specific sensor which can be deployed for in-situ measurements within microdroplets.

Recent advances from the Ajoy Lab have enabled 13C nuclear spins in diamond nanoparticles to serve as “quantum sensors” whose own NMR output relays and amplifies the vanishingly weak NMR signals from surrounding analytes, with fine spatial resolution set by the particle size.

Prof. Ajoy stated, “It is exciting to receive funding for this forward looking project from the W.M. Keck Foundation. Beyond the diverse applications of these mechanistic discoveries to harness accelerated chemistry in microdroplet environments, the novel deployable chemical imaging probes we will develop as part of this project will have vast potential in a variety of biological and surface science problems”.

About the W.M. Keck Foundation

The W. M. Keck Foundation was established in 1954 by William Myron Keck, founder of the Superior Oil Company. The Foundation’s grant making program is primarily focused on pioneering efforts in the areas of medical research, science and engineering, and undergraduate education. Previous awardees of this grant have included professors Kwabena Bediako, Michael Zuerch, Norman Yao, and Stephen Leone.