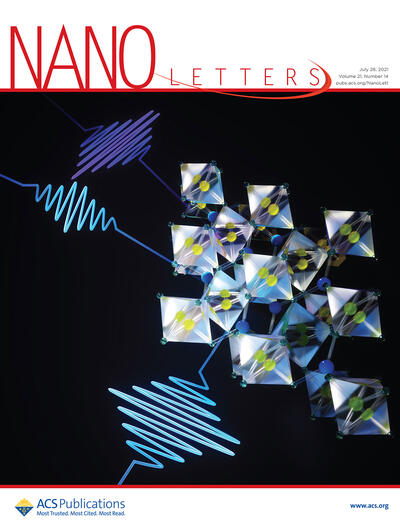 On the Cover: Artist rendering of second harmonic generation spectroscopy in the extreme ultraviolet state. Illustration by Ella Marushenko. (Nano Letters, Vol 21, No 14)

(SHG) spectroscopy in the extreme ultraviolet is an emerging technique used to study inversion symmetry breaking with core-state specificity. Originally developed in the 1960’s, second harmonic generation has been a popular nonlinear optical method to study symmetry-related properties in materials and as a source for the up-conversion of light pulses to higher energies. However, its use has been mainly limited to visible and infrared wavelengths and not extended to the x-ray regime because the efficiency of SHG scales with the intensity of incident light squared. It has only been in the last ten years that large free electron lasers have been produced, which can produce extremely high intensities of x-ray light, thus enabling such nonlinear optical methods to be performed in this regime.

Pushing nonlinear spectroscopic techniques to the x-ray regime has only been demonstrated recently, but has several advantageous motivations. For example, higher energy x-rays can access certain states in a material that are more “element-specific” than are typically probed with visible light. What this enables is the ability to study a complicated material from the perspective of a single atomic species.

In new research published in Nano Letters from the lab of Michael Zuerch in the College of Chemistry, researcher Emma Berger, and fellow scientists in the United States and Japan, utilized XUV-SHG spectroscopy to investigate the polar metal phase of LiOsO3, where the coexistence of polarity and metallicity is unexpected since the itinerant conducting electrons in metals are expected to screen out long-range electrostatic forces that typically stabilize a permanent polarization. This is one of the first uses of nonlinear x-ray spectroscopy to investigate a material across a phase transition, where symmetries are necessarily broken.

Berger states, "Free electron laser (FEL) facilities are in their infancy. The first lasing of an FEL was only about a decade ago. In that sense, there's a lot of science that FEL technology enables and there is a lot to be discovered. Nonlinear optical methods that use visible light, for example, (red-orange-yellow-green-blue-purple) have been intensely studied since the 1950's. In the x-ray regime, such nonlinear methods are totally underdeveloped because of the lack of available high intensity sources. For me, this is really exciting because there's a lot of open questions to pursue." 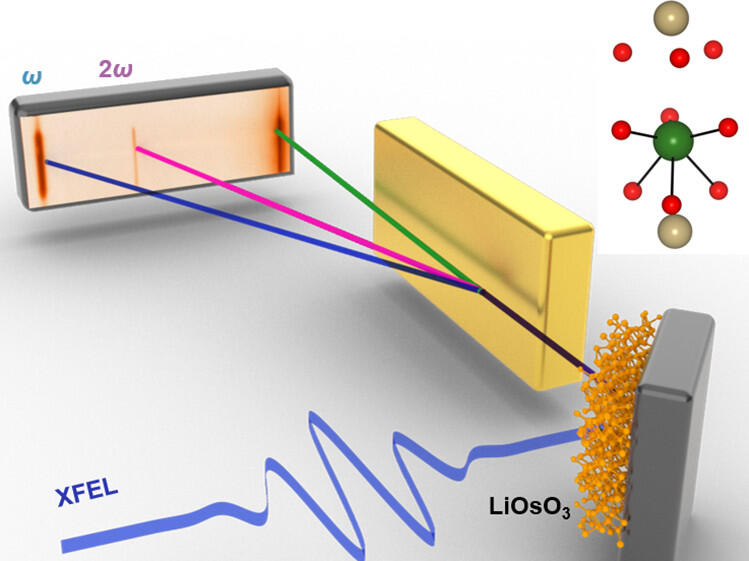 Schematic of the experimental setup. The fundamental XUV beam is incident on the [120] plane of a LiOsO3 crystal under a 45° angle of incidence, with respect to the surface normal. The reflected beam is spectrally dispersed by a grating onto a detector, enabling simultaneous measurement of signals at the fundamental and SHG frequencies. Illustration courtesy of the Zuerch Lab.

A sensitivity to broken inversion symmetry appears above the Li K-edge, with theoretical calculations showing how the spectrally-resolved SHG varies with Li-displacement. As the first demonstration of XUV-SHG spectroscopy around a phase transition, these results pave the way for using nonlinear XUV methods to investigate broken symmetry from an element-specific perspective.

According to Berger, "Nonlinear optical methods in the x-ray regime have only been demonstrated as possible in the last five or so years. The first experiments were really just proof-of-principle experiments. Here, we have extended the earlier work to show that nonlinear x-ray spectroscopy can be used to actually learn something much more complex about a material."

The Zuerch Lab, at the University of California at Berkeley, experimentally explores structural, carrier and spin dynamics in novel quantum materials, heterostructures and on surfaces and at interfaces to answer current questions in materials science and physical chemistry. For this we pursue a multidisciplinary research program that combines the exquisite possibilities that ultrafast X-ray spectroscopy and nanoimaging offers and closely interface with material synthesis and theory groups. We employ state-of-the-art methods and develop novel nonlinear X-ray spectroscopies in our lab and at large-scale facilities. Specifically, we are interested in experimentally studying and controlling material properties on time scales down to the sub-femtosecond regime and on nanometer length scales to tackle challenging problems in quantum electronics, information storage and solar energy conversion.

This work was done in collaboration with researchers from Berkeley Lab, UC San Diego, Argonne National Laboratory, Pennsylvania State University, and the University of Tokyo. The experiments were conducted at the free-electron laser facility SACLA in Japan.