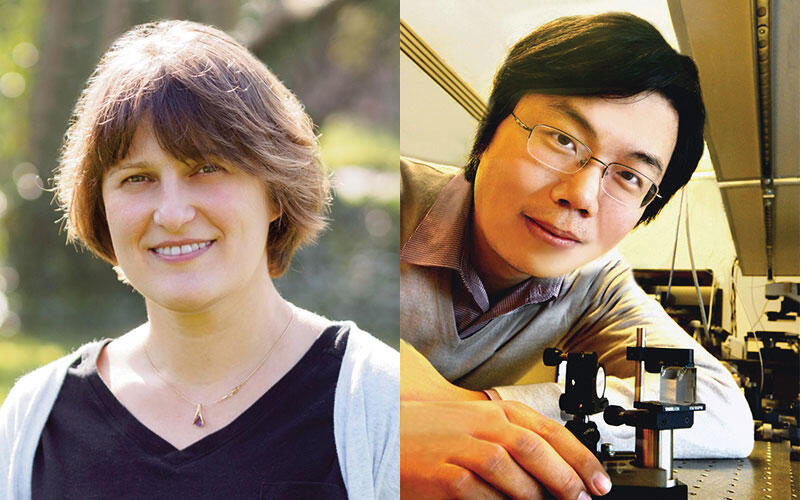 The Pew Charitable Trusts has annouced the 2020 grantees of the Pew Innovation Fund which supports research collaborations among alumni of their biomedical programs. This year, six pairs of researchers will partner on some of the most complex questions in human biology and disease. From neuroscience and virology to biophysics and computational biology, the 2020 Innovation Fund teams are combining their expertise to explore a variety of research areas.

Currently, Alzheimer’s disease disproportionately affects women. Despite extensive research, little is known about why this gender disparity exists. Lishko and Xu have identified a novel steroid receptor that regulates ion channels in the choroid plexus, a brain tissue that controls the flow of cerebrospinal fluid and is regulated by steroid hormones such as progesterone and estrogen—both of which decline with age in women. By dissecting the molecular mechanisms behind progesterone’s role in regulating cerebrospinal fluid in the aging brain, these investigators hope to uncover gender differences in steroid regulation and its role in Alzheimer’s disease.

For 35 years, Pew Charitable Trusts has supported risk-taking and collaboration among its growing network of what is now more than 1,000 biomedical scientists. To commemorate this commitment to interdisciplinary research, Pew launched the Innovation Fund in 2017 to support joint projects among alumni of its biomedical programs in the United States and Latin America.

Lishko’s current research looks at ways to improve human reproductive health and understand the basic molecular mechanisms underlying the physiology of mammalian fertilization. In particular, her lab is studying the physiology of sperm ion channels, macromolecules essential for proper ion homeostasis, and signal transduction. The aim is that by studying the molecular physiology of human sperm cells we can develop safe unisex contraceptives and much needed diagnostic tests for male fertility.

Xu and his research group develop new experimental tools to interrogate biological, chemical, and materials systems at the nanoscale with extraordinary resolution, sensitivity, and functionality. To achieve this, the group takes an interdisciplinary, multidimensional approach that integrates advanced microscopy, spectroscopy, cell biology, and nanotechnology. Recent developments include spectrally resolved and functional super-resolution microscopy, ultrahigh-throughput single-molecule spectroscopy, interference-based microscopy for 2D materials, and uncovering the nanoscale ultrastructure of the membrane cytoskeleton and intracellular vesicles.

The Pew Charitable Trusts is driven by the power of knowledge to solve today's most challenging problems. We are an independent nonprofit organization – the sole beneficiary of seven individual trusts established between 1948 and 1979 by two sons and two daughters of Sun Oil Company founder Joseph N. Pew and his wife, Mary Anderson Pew.

From its first day in 1948, Pew's founders steeped the new institution with the entrepreneurial and optimistic spirit that characterized their lives. As the country and the world have evolved, we have remained dedicated to our founders' emphasis on innovation. Today, Pew is a global research and public policy organization, still operated as a non-partisan, non-governmental organization dedicated to serving the public.