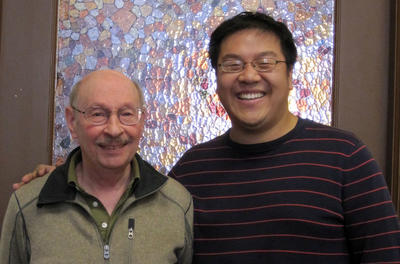 Stephen Leone, the John R. Thomas Endowed Chair in Physical Chemistry and Professor of Physics and Norman Yao, Assistant Professor of Physics have been awarded a $1m science and engineering research grant from the W. M. Keck Foundation. The two scientists will utilize a new technique, ultrafast X-ray spectroscopy, to address important unanswered questions about the formation of non-equilibrium topological phases.

The proposal for the project titled "Non-Equilibrium Phases of Matter" was submitted by the office of Chancellor Carol T. Christ. Leone and Yao have previously collaborated on the development of a novel ultrafast spectroscopy tool capable of generating attosecond pulses at the carbon K-edge. Leveraging in part these new capabilities, Leone and Yao propose to experimentally realize novel phases of quantum matter that occur outside the traditional venue of thermal equilibrium.  Such non-equilibrium quantum phases can only be stabilized in the presence of a strong periodic external driving force. Since the associated ordering often arises in the time-domain, the researchers plan to use attosecond spectroscopy to probe these states with unprecedented temporal resolution.

Based in Los Angeles, the W. M. Keck Foundation was established in 1954 by the late W. M. Keck, founder of the Superior Oil Company. The Foundation’s grant making is focused primarily on pioneering efforts in the areas of medical research, science and engineering and undergraduate education. The Foundation also maintains a Southern California Grant Program that provides support for the Los Angeles community, with a special emphasis on children and youth.