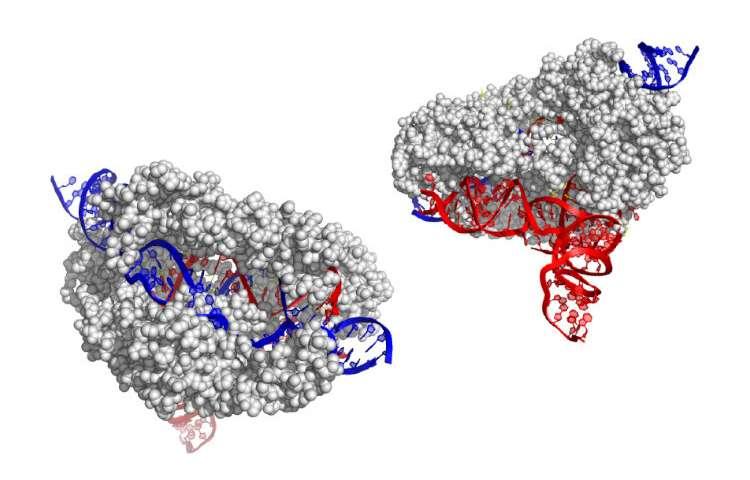 A new gene-editing protein, CasX, may give CRISPR-Cas9 a run for its money. UC Berkeley scientists have determined the unique structure of CasX (grey), revealing that this pint-sized Cas enzyme is dominated by RNA (red) that directs it to specific sequences of DNA (blue), where it binds and cuts the DNA. Credit: University of California - Berkeley

In a mere seven years, Cas9 has shown itself to be a formidable gene editor, employed in humans, plants, animals and bacteria to quickly and accurately cut and splice DNA, transforming biology and opening new avenues for treating disease.

But a new kid on the block, CasX, may give Cas9 a run for its money.

Discovered two years ago by UC Berkeley scientists Jill Banfield and Jennifer Doudna in some of the world’s smallest bacteria, the protein was similar to Cas9, but quite a bit smaller: a big advantage if you’re trying to deliver a gene editor into a cell.

But would it work outside its native bacteria?

According to a study published today in Nature, CasX is, in fact, a potent and efficient gene editor in both bacteria and human cells. Its design is similar to Cas9 and its well-studied cousin, Cas12, but it is different enough that it appears to have evolved in bacteria independently of the other Cas proteins. It can cut double-stranded DNA like Cas9, can bind to DNA to regulate genes, and it can be targeted to specific DNA sequences like other Cas proteins.

Plus, because it comes from bacteria that are not found in humans — Banfield dredged them from a database of microbes found in groundwater and sediment — the human immune system should accept it more easily than Cas9. Some doctors fear that Cas9 may create an immune reaction in patients treated with CRISPR therapies.

“The immunogenicity, delivery and specificity of a genome-editing tool are all vitally important,” said co-lead author Benjamin Oakes, a former UC Berkeley graduate student and current Entrepreneurial Fellow in the Innovative Genomics Institute. “We’re excited about CasX on all of these fronts.”

Co-lead authors Jun-Jie Liu and Natalia Orlova used a cryo-electron microscope to capture snapshots of the CasX protein going through the motions of editing a gene. Based on the protein’s unique molecular makeup and shape, the researchers concluded that CasX evolved independently of Cas9, sharing no common ancestor.

“The first thing that jumps out is how the highly unique domains accomplish similar roles to what we have seen with other RNA-guided DNA-binding proteins. CasX’s minimal size, with no fat on the bone, helps to clearly demonstrate there is a basic recipe that nature uses,” Oakes said. “Understanding this recipe will help us to better evolve and engineer genome editing tools for our purposes rather than nature’s.”

That’s exactly what he and his colleagues are now doing.

“The culmination of biochemistry, genome editing and structure experiments within this single study is a prime example of the comprehensive efforts that are underway at the IGI,” said Jennifer Doudna, IGI’s executive director, a UC Berkeley professor of molecular and cell biology and of chemistry and a Howard Hughes Medical Institute Investigator. “We aren’t just looking to uncover the next pair of molecular scissors. We want to build the next Swiss Army knife.”

More news on this discovery: