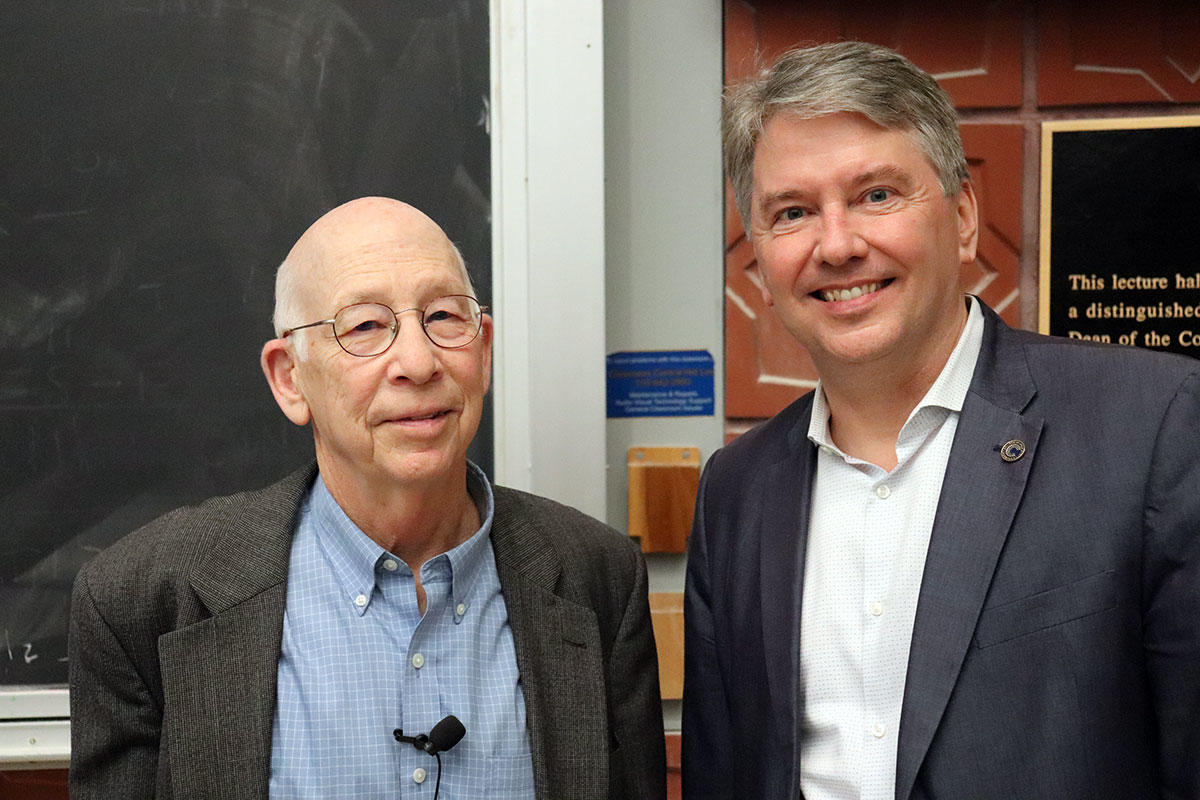 Professor Robert Bergman and Dean Douglas Clark before the lecture

Robert Bergman, the Gerald E. K. Branch Distinguished Professor Emeritus of Chemistry and Professor of the Graduate School, presented the 65th lecture in honor of Gilbert Newton Lewis (Dean of the College from 1912-1941). The talk was entitled: "The Application of Physical Organic Methods to the Investigation of Organometallic Reaction Mechanisms: A Nostalgia Trip through some Organotransition Metal Chemistry of the Late 20th Century." (A pdf presentation is available online.)

Professor Bergman received his undergraduate degree in Chemistry at Carleton College; his Ph.D. at the University of Wisconsin, Madison; and was a postdoctoral researcher at Columbia University. He was a professor at the California Institute of Technology before his appointment as professor in the Department of Chemistry at UC Berkeley and Senior Faculty Scientist at Lawrence Berkeley National Lab. He retired in 2016, and is currently the Gerald E. K. Branch Distinguished Professor, Emeritus, and Professor of the Graduate School in the Department of Chemistry.

He has been recognized with numerous honors and awards including the Wolf Prize, the Welch Award, the Award in Organometallic Chemistry, the Arthur C. Cope Award, the Department of Energy E. O. Lawrence Award in Chemistry, a Guggenheim Fellowship, and the US National Academy of Sciences Award in Chemical Sciences, among many others. He is a member of the National Academy of Sciences, a Fellow of the American Academy of Arts and Sciences, the American Chemical Society, and the American Association for the Advancement of Science. On campus, he was recognized with the Chancellor’s Award for Public Service.

Since transitioning to Emeritus status, he continues to teach and to do research in collaboration with fellow chemistry colleagues. His research career has focused on utilizing a range of chemical techniques to discover new chemical reactions, determine how those reactions work, and apply that understanding to their application in catalysis and organic synthesis.

Professor Bergman's research group generated and studied reactive organometallic intermediates capable of undergoing intermolecular oxidative addition with the normally inert C-H bonds in alkanes and other organic molecules. This process holds potential for converting alkanes into functionalized organic molecules such as alkenes and alcohols. Solution mechanistic studies, as well as flash kinetic experiments carried out in collaboration with the C. B. Moore and C. B. Harris groups, identified alkane-metal complexes as intermediates in many of these reactions. In collaborations with the J. A. Ellman group, formerly at Berkeley and subsequently at Yale University, C-H activating reactions were used to develop new catalytic intra- and intermolecular carbon-carbon bond-forming reactions, some of which are enantioselective.

A current area of investigation being pursued in collaboration with John Arnold and his group, involves the study of organometallic complexes having metal-oxygen -and metal-nitrogen bonds to obtain information about the mechanisms of metal-mediated oxidation and amination processes. Some of the compounds prepared in these projects have been utilized to develop homogeneous catalysts for new carbon-hydrogen and carbon-heteroatom bond-forming processes.

Another collaborative project with the K. N. Raymond and F. D. Toste groups has identified highly selective organic and organometallic transformations that can be carried out in the sterically confined cavities of self-assembled nanovessels, in some cases with levels of rate acceleration that allow the encapsulated reactions to be performed catalytically.

Professor Bergman also has spearheaded the outreach program BASIS  (Bay Area Scientists in Schools). The program sends Berkeley graduate students into elementary schools in the local community in collaboration with an organization called Community Resources for Science (CRS) to make science presentations. Since its inception, the BASIS program has grown to involve over 500 graduate students from a wide range of Berkeley departments, as well as other scientists from the local community.

Professor Bergman's slides are available as a pdf download. His recorded presentation is available below.

Building a community of belonging
END_OF_DOCUMENT_TOKEN_TO_BE_REPLACED