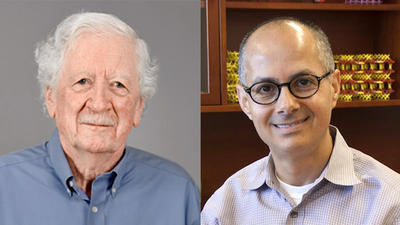 The Royal Swedish Academy of Sciences has awarded the 2019 Gregori Aminoff Prize in Crystallography to Michael O’Keeffe, Arizona State University, and Omar M. Yaghi, University of California, “for their fundamental contributions to the development of reticular chemistry”.

Metal ions like to surround themselves with molecules (ligands) that bond in well-defined patterns. Each metal ion bonds with several ligands and, if the ligands are also able to bond with several metal ions, networks arise. These are called coordination polymers. They are similar to constructions built from pieces of LEGO, where the bonds between the pieces are governed by clear rules. In general, coordination polymers are disordered structures with poorly defined properties, such as when LEGO pieces are joined haphazardly. However, if the ligands and metal ions are carefully selected, the structure becomes well-ordered and its properties clearly defined. 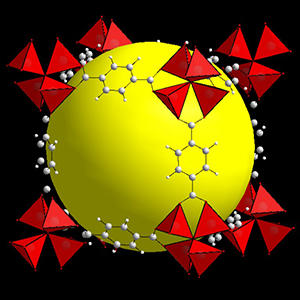 (image: Drawing of MOF-5, an early material produced by O’Keffee and Yaghi that clearly showed the potential for new materials offered by their methods.)

Michael O’Keeffe and Omar M. Yaghi have laid the foundation of reticular chemistry, where the whole idea is to create well-ordered open frameworks. These materials are built according to simple structural principles; by varying the size of the ligands or functional groups bonded with the ligands, for example, series of materials with similar but regulated variable properties can be synthesised.

Based on the principles that Michael O’Keeffe and Omar M. Yaghi described in their first works, providing stunning examples in their own syntheses, many new compounds have been created in what can only be described as a revolution in synthetic chemistry. A collective name for these materials is MOF (metal-organic frameworks). They are characterised by high porosity and a high capacity for absorbing guest molecules in their pores. Notable among the many uses of MOF materials is the absorption of carbon dioxide from the air, catalysation, and the effective storage of hydrogen.

The intention of the Gregori Aminoff Prize is to reward a documented, individual contribution in the field of crystallography, including areas relating to the dynamics of the formation and dissolution of crystal structures. Some preference shall be given to work that demonstrates elegance in its approach to the problem.

The prize has been awarded since 1979 and is primarily awarded to a Swedish or foreign researcher, otherwise to a research group that consists of no more than three people.

Omar Yaghi is the Neeltje Tretter Chair Professor of Chemistry at UC Berkeley, and a Senior Faculty Scientist at Lawrence Berkeley National Laboratory.