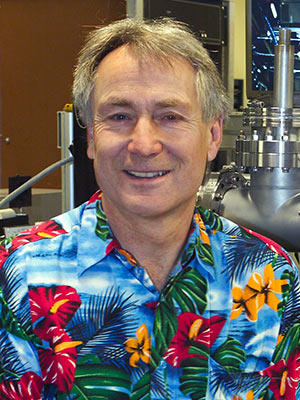 Class of 1932 Endowed Professor of Chemistry, Richard Saykally, has been awarded a 2018 Helmholtz International Fellow Award for his research using X-ray spectroscopy to study the detailed chemistry of the global carbon cycle, characterizing the hydration structure and intermolecular interactions in aqueous CO2, carbonic acid, carbonate, bicarbonate, and the calcium and magnesium salts that ultimately form limestone.

"I wholeheartedly congratulate all the awardees," stated Otmar D. Wiestler, President of the Helmholtz Association. "They have made exceptional contributions to fields of research which are central to the work of our research association. Above all, the award is intended to deepen our collaboration with them."

The award includes a prize and an invitation to work with other researchers at one or more Helmholtz Centers. Saykally said of the award, "I am most honored to receive this prestigious fellowship from my colleagues at the Helmholtz Institute, and very much look forward to working with them on our mutual interests"

Saykally is the Class of 1932 Endowed Professor in Chemistry at UC Berkeley. He has been a professor since 1979. He and his students have pioneered many important advances in spectroscopy, including velocity modulation spectroscopy of ions, terahertz laser vibration-rotation-tunneling spectroscopy of clusters, infrared photon counting spectroscopy, cavity ringdown spectroscopy, and X-ray spectroscopy of liquid microjets. These have permitted the first detailed study of important textbook molecules, including the hydronium (H3O+), hydroxide (OH-) and ammonium (NH4+) ions, as well as small water clusters and carbon clusters.

A co-author of over 400 publications, cited more than 45,000 times, and the recipient of over 70 honors and awards from 12 different countries, Saykally is a member of the National Academy of Sciences and the American Academy of Arts and Sciences. He is the recipient of the E.O. Lawrence Award in Chemistry from the U.S. Department of Energy. Along with his many other honors, he is a UC Berkeley Distinguished Teacher, and has been active at the national level in science education. Over 150 students and postdocs have trained under his direction, many of whom hold prominent positions in academic, government, and industrial institutions. Read more about Professor Saykally and his research here>

About the Helmholtz Association of German Research Centers

Building a community of belonging
END_OF_DOCUMENT_TOKEN_TO_BE_REPLACED