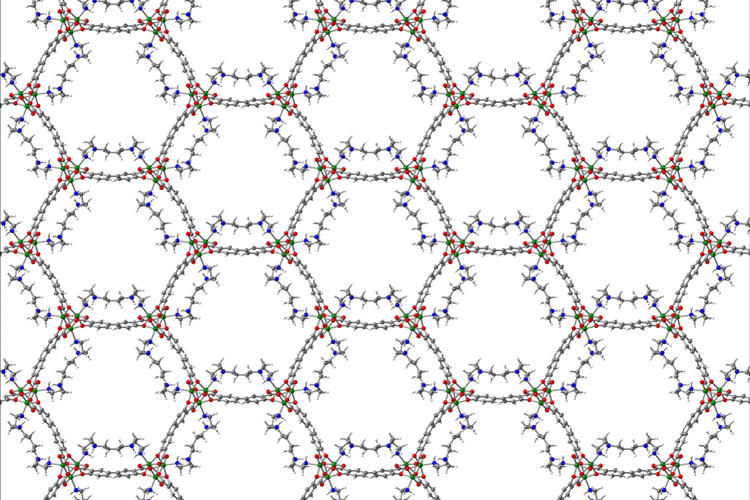 Metal-organic frameworks are highly porous, making them ideal for absorbing gases and liquids. This graphic shows the interior of a MOF based on the metal magnesium (green balls), and has added molecules — tetraamines (blue & gray) — added to the pores to more efficiently absorb carbon dioxide from power plant emissions. (UC Berkeley graphic by Eugene Kim)

A big advance in carbon capture technology could provide an efficient and inexpensive way for natural gas power plants to remove carbon dioxide from their flue emissions, a necessary step in reducing greenhouse gas emissions to slow global warming and climate change.

Developed by researchers at the University of California, Berkeley, Lawrence Berkeley National Laboratory and ExxonMobil, the new technique uses a highly porous material called a metal-organic framework, or MOF, modified with nitrogen-containing amine molecules to capture the CO2 and low temperature steam to flush out the CO2 for other uses or to sequester it underground.

In experiments, the technique showed a six times greater capacity for removing CO2 from flue gas than current amine-based technology, and it was highly selective, capturing more than 90% of the CO2 emitted. The process uses low temperature steam to regenerate the MOF for repeated use, meaning less energy is required for carbon capture.

“For CO2 capture, steam stripping — where you use direct contact with steam to take off the CO2 — has been a sort of holy grail for the field. It is rightly seen as the cheapest way to do it,” said senior researcher Jeffrey Long, UC Berkeley professor of chemistry and of chemical and biomolecular engineering and senior faculty scientist at Berkeley Lab. “These materials, at least from the experiments we have done so far, look very promising.”

Because there’s little market for most captured CO2, power plants would likely pump most of it back into the ground, or sequester it, where it would ideally turn into rock. The cost of scrubbing the emissions would have to be facilitated by government policies, such as carbon trading or a carbon tax, to incentivize CO2 capture and sequestration, something many countries have already implemented.

The work was funded by ExxonMobil, which is working with both the Berkeley group and Long’s start-up, Mosaic Materials Inc., to develop, scale up and test processes for stripping CO2 from emissions.

Long is the senior author of a paper describing the new technique that will appear in the July 24 issue of the journal Science. 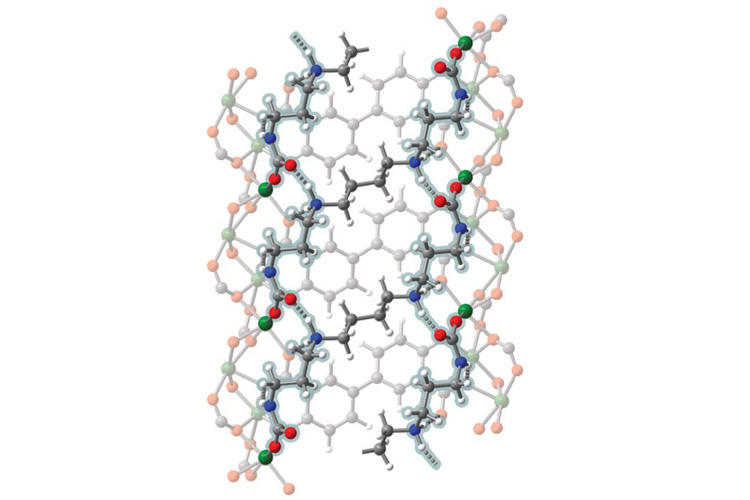 Metal-organic frameworks are highly porous, making them ideal for absorbing gases and liquids. This graphic shows the interior of a MOF based on the metal magnesium (green balls), and has added molecules — tetraamines (blue & gray) — added to the pores to more efficiently absorb carbon dioxide from power plant emissions. (UC Berkeley graphic by Eugene Kim)

“We were able to take the initial discovery and, through research and testing, derive a material that in lab experiments has shown the potential to not only capture CO2 under the extreme conditions present in flue gas emissions from natural gas power plants, but to do so with no loss in selectivity,” said co-author Simon Weston, senior research associate and the project lead at ExxonMobil Research and Engineering Co. “We have shown that these new materials can then be regenerated with low-grade steam for repeated use, providing a pathway for a viable solution for carbon capture at scale.”

“In reality, of the kinds of things that the Intergovernmental Panel on Climate Change says we need to do to control global warming, CO2 capture is a huge part,” Long said. “We don’t have a use for most of the CO2 that we need to stop emitting, but we have to do it.”

Power plants strip CO2 from flue emissions today by bubbling flue gases through organic amines in water, which bind and extract the carbon dioxide. The liquid is then heated to 120-150 C (250-300 F) to release the CO2 gas, after which the liquids are reused. The entire process consumes about 30% of the power generated. Sequestering the captured CO2 underground costs an additional, though small, fraction of that. 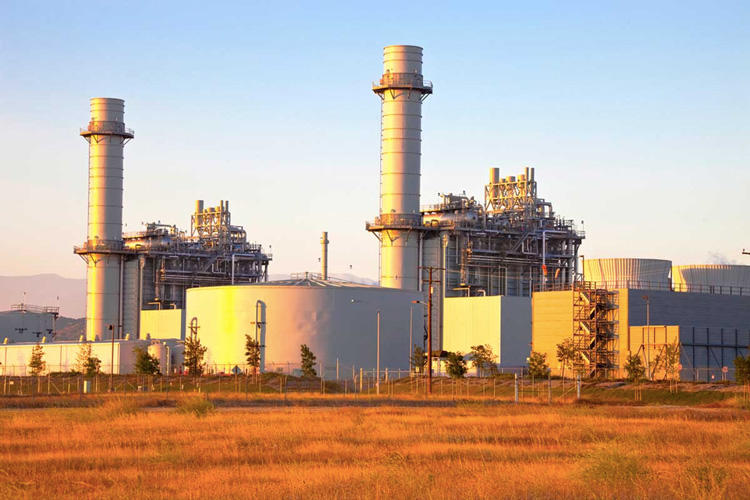 An electricity-generating plant fueled by natural gas. A new technique could capture carbon dioxide from the emissions from such plants in order to sequester it underground and reduce the greenhouse gases responsible for climate change. (Photo courtesy of International Energy Agency)

Six years ago, Long and his group in UC Berkeley’s Center for Gas Separations, which is funded by the U.S. Department of Energy, discovered a chemically modified MOF that readily captures CO2 from concentrated power plant flue emissions, potentially reducing the capture cost by half. They added diamine molecules to a magnesium-based MOF to catalyze the formation of polymer chains of CO2 that could then be purged by flushing with a humid stream of carbon dioxide.

Because MOFs are very porous, in this case like a honeycomb, an amount the weight of a paper clip has an internal surface area equal to that of a football field, all available for adsorbing gases.

A major advantage of the amine-appended MOFs is that the amines can be tweaked to capture CO2 at different concentrations, ranging from the 12% to 15% typical of coal plant emissions to the 4% typical of natural gas plants, or even the much lower concentrations in ambient air. Mosaic Materials, which Long co-founded and directs, was created to make this technique available widely to power and industrial plants.

But the 180 C stream of water and CO2 needed to flush the captured CO2 eventually drives off the diamine molecules, shortening the life of the material. The new version uses four amine molecules — a tetraamine — that is much more stable at high temperatures and in the presence of steam.

“The tetraamines are so strongly bound within the MOF that we can use a very concentrated stream of water vapor with zero CO2, and if you tried that with the previous adsorbents, the steam would start destroying the material,” Long said.

They showed that direct contact with steam at 110-120 C — a bit above the boiling point of water — works well to flush out the CO2. Steam at that temperature is readily available in natural gas power plants, whereas the 180 C CO2-water mix required to regenerate the earlier modified MOF necessitated heating, which wastes energy.

When Long, Weston and their colleagues first thought about replacing diamines with tougher tetraamines, it seemed like a long shot. But crystal structures of the diamine-containing MOFs suggested that there could be ways of connecting two diamines to form a tetraamine while preserving the ability of the material to polymerize CO2. When UC Berkeley graduate student Eugene Kim, the paper’s first author, chemically created the tetraamine-appended MOF, it outperformed the diamine-appended MOF on the first try.

The researchers subsequently studied the structure of the modified MOF using Berkeley Lab’s Advanced Light Source, revealing that the CO2 polymers that line the pores of the MOF are actually linked by the tetraamines, like a ladder with tetraamines as the rungs. First-principles density functional theory calculations using the Cori supercomputer in Berkeley Lab’s National Energy Research Scientific Computing Center (NERSC), computing resources at the Molecular Foundry and resources provided by the campus’s Berkeley Research Computing program confirmed this remarkable structure that Long’s team had initially envisioned.

“I have been doing research at Cal for 23 years now, and this is one of those times where you have what seemed like a crazy idea, and it just worked right away,” Long said.