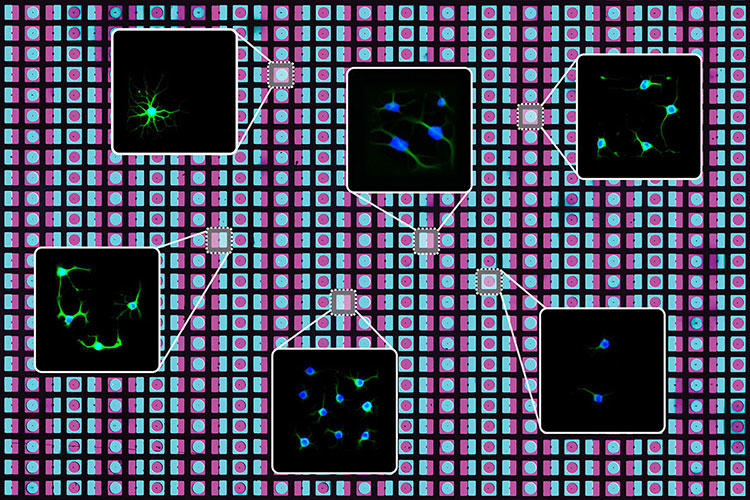 University of California, Berkeley, researchers have created a new technique that utilizes photolithography and programmable DNA to rapidly “print” two-dimensional arrays of cells and proteins that mimic a wide variety of cellular environments in the body. (UC Berkeley graphic by Olivia Scheideler)

Like humans, cells are easily influenced by peer pressure.

Take a neural stem cell in the brain: Whether this cell remains a stem cell or differentiates into a fully formed brain cell is ultimately determined by a complex set of molecular messages the cell receives from countless neighbors. Understanding these messages is key for scientists hoping to harness these stem cells to treat neurological conditions like Alzheimer’s or Parkinson’s.

With the help of photolithography and a creative use of programmable DNA, University of California, Berkeley, researchers have created a new technique that can rapidly “print” two-dimensional arrays of cells and proteins that mimic a wide variety of cellular environments in the body — be it the brain tissue surrounding a neural stem cell, the lining of the intestine or liver or the cellular configuration inside a tumor.

This technique could help scientists develop a better understanding of the complex cell-to-cell messaging that dictates a cell’s final fate, from neural stem cell differentiating into a brain cell to a tumor cell with the potential to metastasize to an embryonic stem cell becoming an organ cell.

“What’s really powerful about this platform is you can create in vitro tissues that capture the spatial organization of cells in the body, from the intestinal lining of your digestive tract to the arrangements of different cell types in the liver,” said Olivia Scheideler, who completed the research as a graduate student at Berkeley. “I think you could apply this technique to recreate any tissue where you want to explore how cellular interactions contribute to tissue function.”

In a paper appearing today (Wednesday, March 18) in the journal Science Advances, Scheideler and her collaborators show that the new technique can be used to rapidly print intricate patterns of up to 10 different kinds cells or proteins onto a flat surface.

“Essentially, what this technique allows us to do is pattern different kinds of conditions in one shot and in a high-throughput manner,” said Lydia Sohn, Chancellor’s Professor of Mechanical Engineering at UC Berkeley and senior author of the paper. “It provides a whole range of options for what you could study, because it’s so flexible. You can pattern many different kinds of cells or proteins.” 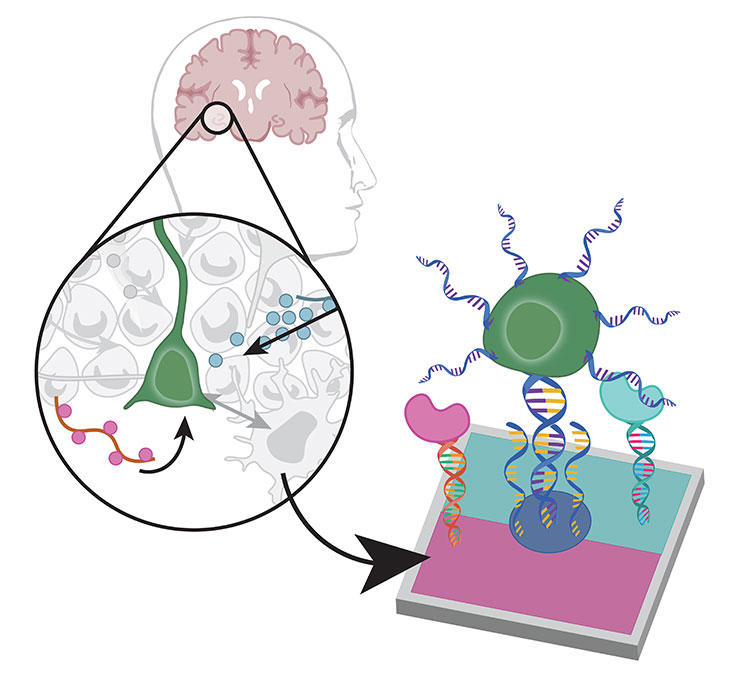 In the new technique, cells and proteins are attached to a substrate via a DNA “tether.” The researchers used the technique to pattern neural stem cells alongside important cellular signaling proteins to find out how these proteins influence the cells’ ultimate fates: whether they remain stem cells or differentiate into mature neurons. (UC Berkeley graphic by Olivia Scheideler)

Caught on a DNA tether

In the new technique, each cell or protein is tethered to a substrate with a short string of DNA. While similar methods have been developed that attach tethered cells or proteins one by one, the new technique takes advantage of a patterning process called photolithography to attach, or print, each type of cell protein in one quick batch, greatly speeding up the process.

“It’s like color laser printing, where you print one color and then print another,” Sohn said.

Like photography, photolithography works by exposing a coated surface or substrate to a pattern of light, which initiates a chemical reaction that dissolves the coating in the illuminated areas, leaving a templated substrate. In the new technique, the substrate is then bathed in strands of single-sided DNA, whose ends have been chemically altered to firmly latch on where the coating has been dissolved.

“All the cells and proteins attach exactly where they should be because of the DNA programming,” Sohn said.

By repeating the process, up to 10 different kinds of cells or proteins can be tethered to the surface in an arbitrary pattern.

To demonstrate one of the many applications of the technique, Scheideler and co-author David Schaffer, Hubbard Howe Jr. Distinguished Professor of Biochemical Engineering at UC Berkeley, used the platform to study the chemical signaling that cues neural stem cells to differentiate into mature cells.

“Stem cells have programs embedded inside their DNA that tell them (to) either stay a stem cell or to differentiate into a mature cell,’” Schaffer said. “And they receive a lot of information about what to do and which programs to activate from the environment, from other cells around them. If we could learn how to make stem cells do our bidding, how to turn them into a particular cell type, then we could harness the stem cells to mass produce specialized cell types that were lost due to disease or injury.”

Scheideler used the new technique to pattern neural stem cells onto thousands of different arrays of the two proteins, FGF-2 and ephrin-B2, to see how the spatial organization of the two signals helps determine the cells’ ultimate fate.

“The great thing about this patterning technology is you can easily replicate these little patterns hundreds or thousands of times across a slide,” Schaffer said. “It is like running a thousand little independent experiments, each of which is a trial run to see how a stem cell listens to the cells around it. And then you can get very, very deep statistics about the various ways that it can be regulated.”