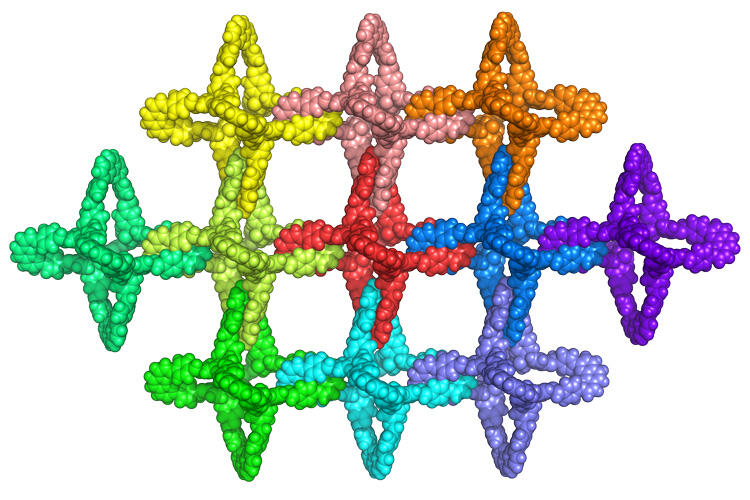 The individual building blocks of a catenane are polyhedral molecules — a type of adamantane — that link arms to form a 2D mesh or 3D network that is sturdy but flexible. (Image credit: Tianqiong Ma, UC Berkeley)

University of California, Berkeley, chemists have created a new type of material from millions of identical, interlocking molecules that for the first time allows the synthesis of extensive 2D or 3D structures that are flexible, strong and resilient, like the chain mail that protected medieval knights.

The material, called an infinite catenane, can be synthesized in a single chemical step.

French chemist Jean-Pierre Sauvage shared the 2016 Nobel Prize in Chemistry for synthesizing the first catenane — two linked rings. These structures served as the foundation for making molecular structures capable of moving, which are often referred to as molecular machines.

But the chemical synthesis of catenanes has remained laborious. Adding each additional ring to a catenane requires another round of chemical synthesis. In the 24 years since Sauvage created a two-ring catenane, chemists have achieved, at most, a mere 130 interwoven rings in quantities too small to see without an electron microscope.

The new type of catenane, produced in the laboratory of Omar Yaghi, UC Berkeley professor of chemistry, can be produced with an unlimited number of linked units in three dimensions. Because the individual units interlock mechanically and are not connected by chemical bonds, the structures can be flexed without breaking.

“We think that this has really important implications, not just in terms of making tough materials that don’t fracture, but also materials that would go into robotics and aerospace and armored suits and things like this,” said Yaghi, the James and Neeltje Tretter Chair Professor of Chemistry, co-director of the Kavli Energy NanoSciences Institute and the California Research Alliance by BASF, and chief scientist at UC Berkeley’s Bakar Institute of Digital Materials for the Planet.

Yaghi and his colleagues, including first author Tianqiong Ma, a UC Berkeley postdoctoral fellow, reported details of the chemical process this week in the journal Nature Synthesis.

The leap forward in catenane production is possible using a type of chemistry that Yaghi invented more than 30 years ago: reticular chemistry. He describes it as “stitching molecular building blocks into crystalline, extended structures by strong bonds.”

Using this technique, he has made inexpensive porous materials — metal-organic frameworks (MOFs) and covalent organic frameworks (COFs) — that are proving useful in capturing, storing or separating gases such as carbon dioxide, hydrogen and water vapor. More than 100,000 varieties of MOFs have been made to date.

To make MOFs, it’s necessary only to synthesize the right hybrid molecules — metal clusters connected to an organic ligand — and mix them in a solution so that they link up to form a rigid and highly porous 3D network. The chemical groups inside the framework are chosen to bind and release — depending on temperature — specific molecules and reject others.

One MOF that Yaghi created can pull water from even the driest air and then release it when heated, allowing water capture in deserts.

To make catenanes, Yaghi and Ma synthesized a molecule with a crossing between two identical halves, covalently linked by a copper atom. The structure, what they call a catena-COF, is reminiscent of two linked boomerangs with a copper atom where they cross. When mixed, these molecules link up to form a porous 3D network of interlocking building blocks. The building blocks, a type of polyhedral molecule called adamantane, essentially lock their six arms to form an extended framework. 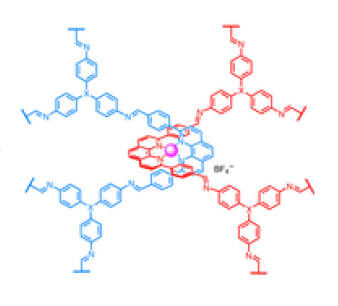 The building block of an infinite catenane, or catena-COF, consists of two crossed molecules with a copper atom at the center. When mixed, they link up to create an extended, 3D material of interlocking molecules. (Illustration courtesy of Yaghi Lab.)

“What’s new here is that the building units have these crossings, and because of the crossings, you get interlocking systems that have interesting, flexible and resilient properties,” Yaghi said. “They’re programed to come together in one step. That’s the power of reticular chemistry. Instead of building them up one unit at a time to make the larger structure, you actually have them programmed such that they come together and grow on their own.”

The molecule with a crossing can be chemically altered so that the final catenane interacts with specific compounds. Yaghi calls these materials (∞) catenanes, using the symbol for infinity.

He noted that while these catenanes extend in three directions on a microscopic level, they can be made thin enough for two dimensional uses, as in clothing. Recently, some scientists have reported that they have created MOFs and COFs by 3D printing, so it may be possible to 3D print catenanes, as well, much like weaving a cloth.

“Traditionally, this interlocking has been done through a multistep, arduous process to make only molecules that have one or two or three interlocking rings, or polyhedra. But to make materials that have amazing properties, like toughness and resiliency, you need millions and millions of these interlockings to be made,” he said. “The traditional way of making them just doesn’t cut it. And reticular chemistry comes in with the building block approach and finds a way of doing it in one step. That’s really the power of this report.”

A big step toward ‘green’ ammonia and a ‘greener’ fertilizer
END_OF_DOCUMENT_TOKEN_TO_BE_REPLACED