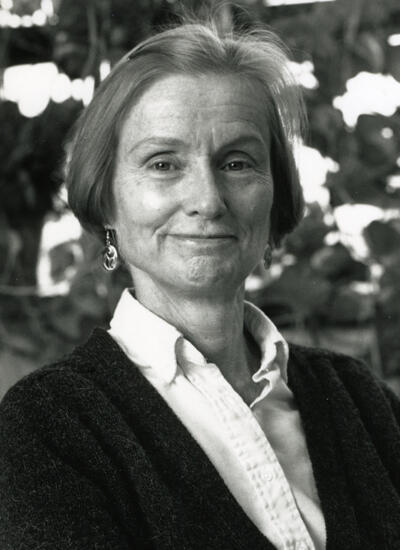 Vera Kistiakowsky (9 September 1928 – 11 December 2021) was an American research physicist, teacher, and arms control activist. She was professor emerita at Massachusetts Institute of Technology in the physics department and Laboratory for Nuclear Science, and was an activist for women's participation in the sciences. Kistiakowsky was an expert in experimental particle physics and observational astrophysics. She was the first woman appointed MIT professor of physics.

Vera was the daughter of physical chemist George Kistiakowsky, who directed the Explosives Division at Los Alamos during the Manhattan Project and later served as President Dwight D. Eisenhower's science advisor. Vera, who entered her first year of college at Mount Holyoke in 1944, visited her father at Los Alamos during the summer months in 1944 and 1945.

Following the project, Vera finished her undergraduate degree at Mount Holyoke College in 1948. She earned her Ph.D. in nuclear chemistry in 1952 under the direction of Glenn Seaborg at the University of California, Berkeley making the first measurements identifying three new isotopes of promethium at the Radiation Laboratory (Berkeley Lab). She married Gerhard Fischer, a fellow student at the University of California in Berkeley, in 1951, and had two children.

Kistiakowsky’s professional career began in the nuclear chemistry field, later moving to nuclear physics, and then particle physics, and finally astrophysics. She held a postdoctoral fellowship working in experimental nuclear physics with Luis Walter Alvarez. She worked at Columbia University from 1954–1959, first as a research fellow in chemistry, assisting a nuclear chemist; she then found support to become a research associate in the physics department assisting Chien-Shiung Wu. Kistiakowsky and her family moved to Cambridge, Massachusetts when her husband got a job at Cambridge Electronic Accelerator. She then worked at Brandeis University for a short time as an assistant professor before starting work at MIT in 1963. At MIT she began her career as a staff member of the MIT Laboratory for Nuclear Science where she worked from 1963 to 1969. She was Senior Research Scientist in the MIT Department of Physics from 1969 to 1971. In 1972 she was the first woman appointed MIT professor of physics.

In the late 1960s, she began advocating for the advancement of women in science. Like her father, she became concerned with issues of international security and weapons policy. She lectured and wrote on these issues and later served on the board for the Center for Arms Control and Non-Proliferation.

From her MIT obituary:

Prof. Vera Kistiakowsky passed away on December 11, 2021 at the age of 93. Dr. Kistiakowsky was the first woman to be appointed a professor of physics at MIT (1972). She subsequently founded the MIT Faculty Newsletter, in response to the precipitous closing of the Department of Applied Biological Sciences under then Provost John Deutch and Dean of Science Gene Brown.

Quoting from her NY Times obituary: “Vera was an adventurous woman ahead of her time. She was a physicist who studied elementary particles and the light from distant stars. She was an early advocate for women in science and a peace activist who called for the abolition of nuclear weapons. . . . Her contributions to experimental particle physics ranged from the design and construction of detectors to their use measuring the properties of high energy sub-atomic particles. Later in her career Vera moved to observational astrophysics, studying the light emitted by supernovae and planetary nebulae. She was a fellow of the American Physical Society (APS) and the American Association for the Advancement of Science, and held an honorary doctorate from Mount Holyoke.”

Vera Kistiakowsky was one of the country’s outstanding scientists of the twentieth century.

She moved to astrophysics because she did not enjoy the work required to build and support the large research teams necessary in experimental physics. She disdained that kind of power and resented the energy that it took away from intellectual work. Energetic and fit, she climbed mountains as a hobby, and tackled several in the Himalayas when she turned 65.

Vera Kistiakowsky also had a very strong interest in education and was a leader in the Department of Physics in this effort. With her tart and no-nonsense demeanor, she was an unfailingly generous colleague. She was especially helpful to young faculty members who often had little experience in teaching when they joined the MIT faculty. She provided not only important material to help them in their teaching, but also honest and thoughtful evaluations of their teaching efforts and outcomes. Many faculty members remember her for these contributions and still miss her presence.

Kistiakowsky was also a pioneering advocate for women in science, publishing early scholarship and founding Women in Science and Engineering in Boston with her friends Elizabeth Baranger and Vera Pless. She founded the American Physical Society Committee on Women in Physics and served as President of the Association of Women in Science. 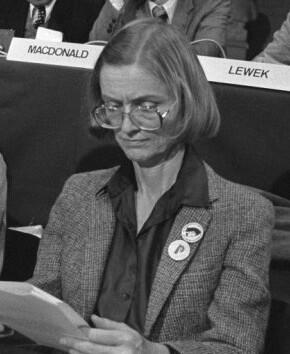 Photo: Public hearing on nuclear weapons and disarmament organized by the World Council of Churches. 1981

Vera was a peace activist, lecturing for nuclear disarmament around the county, and serving on the board of the Council for a Livable World. At MIT she was very outspoken about the need for nuclear disarmament and denounced a number of Department of Defense sponsored projects. She was very active in efforts to promote equity, ethics, and free expression at MIT, which is why she founded the MIT Faculty Newsletter. She is reported to have subsequently said of the Newsletter, “It’s not the radical rag that I had hoped it would become, but it will serve.”

With the faculty meetings chaired by the administration, it was very difficult to make motions opposing the closing of the Department of Applied Biological Science. When the Provost’s office declined to provide the internal mailing addresses of the faculty, Vera went through the directory, hand typed faculty office addresses onto mailing stickers and mailed out the first issue of what became the MIT Faculty Newsletter. Here is the link to the first communication, her “zeroth” issue.

All MIT faculty owe Vera Kistiakowsky gratitude for refusing to be a bystander and for taking on the interests of graduate students, research staff, postdoctoral fellows, and junior faculty whose careers were put at risk by that arbitrary action. We miss her clarity, commitment, and, most of all, her courage to speak up about matters of concern to MIT, to the nation, and to the world.

About her father George Kistiakowsky during WWII