A material to save the world? 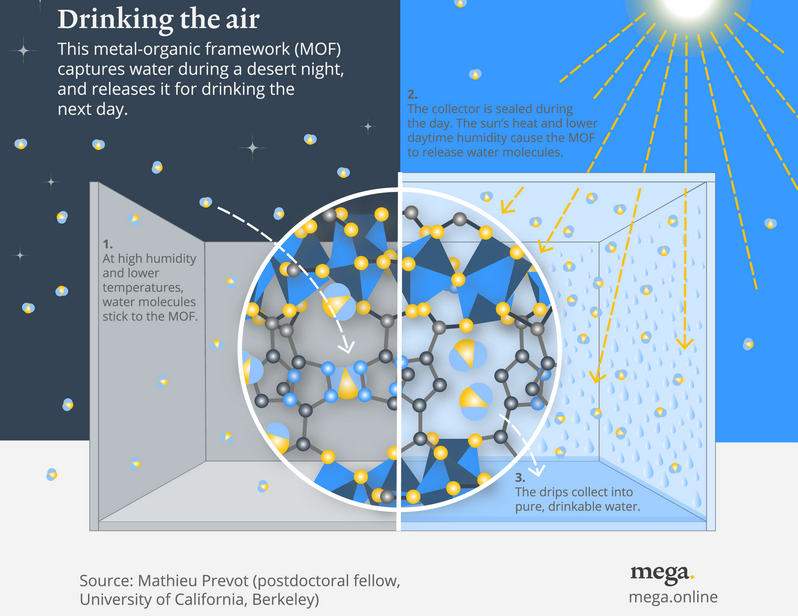 Diagram: MOF framework captures water during a desert night, and releases it for drinking the next day. Courtesy Mathieu Prevot, UC Berkeley.

The Arizona desert is really dry. Anyone stuck in it without water would die from dehydration within three days.

Unless, that is, they had one of Omar Yaghi's next-generation water harvesters. Although daytime humidity is only about 10 per cent, this rises to 40 per cent at night, which means there's enough water in the atmosphere to support life — if it can be converted into liquid form.

That's exactly what Yaghi's device does. It's a plexiglass box within a box — about the size of a small microwave oven — designed to suck the humidity from the air at night and turn it into drinking water the next day using only the heat of the sun as its power source. What makes it work is a powder called a metal-organic framework (MOF), which at normal temperatures attracts water molecules onto the surface of internal pores. Warm it up and the water is released, each harvest producing one-third of a cup of pure drinking water.

"With further improvements, a device the size of a washing machine could produce enough water for the basic needs of a household," says Yaghi, a chemist at the University of California, Berkeley.

One-third of the world's population lacks safe drinking water; for them such a device could be a lifesaver. But that's not the limit of the MOF technology.

These crystalline clusters of metals, such as aluminum or magnesium, linked by organic molecules can be made into materials with extremely high absorption capacities, attracting specific molecules to their surfaces. In this way, MOFs cling to a variety of liquids and gases. They can also be used to create more efficient catalysts or promoters of electrolysis.

MOFs work thanks to their distinctive structure — a profusion of nanometer-sized internal spaces. In fact, a MOF the size of a sugar cube has so many pores that were they to be smoothed out they would cover an area as large as six football fields. MOFs are also extremely stable, light and versatile: their molecular anatomy can be varied to attract specific molecules, such as water, and their pores can be designed to best store them. Adding a small amount of heat or pressure causes the MOF to release what it's holding. More than 70,000 different MOFs have been produced to date for various applications.

Yaghi's prototype water-harvester MOF is made from the expensive metal zirconium, but his next one will be aluminum-based, which is cheaper to scale and presents huge potential for commercialization.

"We're looking forward to testing out the next water-harvester prototype in California's Death Valley," Yaghi says.

Just as MOFs can help solve the problem of water scarcity, they offer a way of reducing a surfeit of greenhouse gases.

In April this year, the carbon dioxide levels in the atmosphere hit an 800,000-year high, contributing to climate change. Recent research suggests ways that MOFs might be able to help mitigate this danger to the Earth's ecosystem.

An international team led by chemists from the University of Manchester, UK, reported in Nature Materials in 2018 that they had developed an aluminum-based MOF that can selectively, reversibly and repeatedly remove another gaseous pollutant, nitrogen dioxide, from the atmosphere in ambient conditions. This discovery could lead to air-filtration technologies that capture and convert large quantities of other gases, such as carbon dioxide, to reduce air pollution.

"A MOF is very interesting because it has this characteristic of interacting strongly with molecules that you want to remove from the atmosphere," says Sihai Yang, one of the study's lead authors and an inorganic chemist at Manchester University's School of Chemistry. "This material is the first example of a MOF that shows a highly reversible and selective capability for repeated separation of nitrogen dioxide from the air, even in the presence of water."

A promising path to commercialization

MOFs are popping up everywhere. In 2017, Illinois-based MOF startup pioneer NuMat Technologies teamed up with electronic materials firm Versum Materials in Arizona to employ MOFs to safely store and deliver dangerous gases, such as arsine, used in the semiconductor industry. For a given pressure, a tank containing a MOF holds more gas than one without. Or, to put it another way, if a gas tank has a MOF in it, then it does not need to be as highly pressurized in order to hold the same amount of gas — making it safer and less likely to explode, and possible less expensive.

"The first wave of applications involved gas storage and release," he says. "Now, about two dozen companies in the past five years are known to be pursuing MOFs, from small startups to larger chemical and automobile companies."

QYResearch forecasts that the MOF market will grow from $70 million in 2017 to $750 million in 2025. "The potential here is just endless," says Yaghi. "As cheaper materials come into focus, there will continue to be even more opportunities for commercialization."

Original Source: 2018, November. A material to save the world? Scientific American Mega