On Mars or Earth, biohybrid can turn CO2 into new products 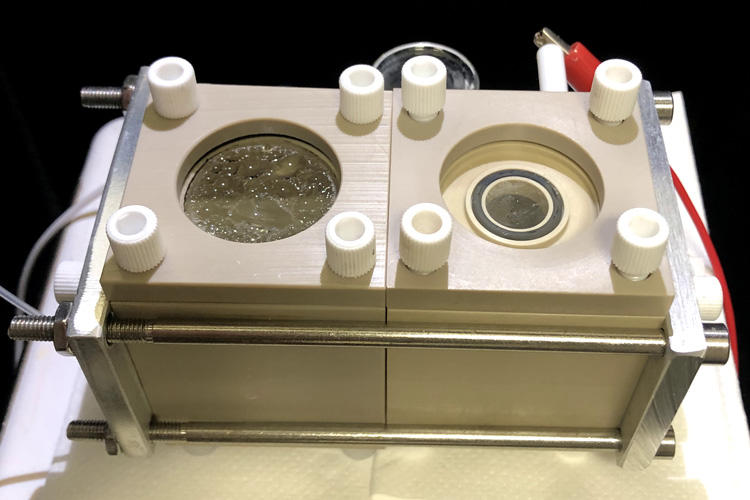 A device to capture carbon dioxide from the air and convert it into useful organic products. On left is the chamber containing the nanowire/bacteria hybrid that reduces CO2 to form acetate. On the right is the chamber where oxygen is produced. (UC Berkeley photo by Peidong Yang)

If humans ever hope to colonize Mars, the settlers will need to manufacture on-planet a huge range of organic compounds, from fuels to drugs, that are too expensive to ship from Earth.

University of California, Berkeley, and Lawrence Berkeley National Laboratory (Berkeley Lab) chemists have a plan for that.

For the past eight years, the researchers have been working on a hybrid system combining bacteria and nanowires that can capture the energy of sunlight to convert carbon dioxide and water into building blocks for organic molecules. Nanowires are thin silicon wires about one-hundredth the width of a human hair, used as electronic components, and also as sensors and solar cells.

“On Mars, about 96% of the atmosphere is CO2. Basically, all you need is these silicon semiconductor nanowires to take in the solar energy and pass it on to these bugs to do the chemistry for you,” said project leader Peidong Yang, professor of chemistry and the S. K. and Angela Chan Distinguished Chair in Energy at UC Berkeley. “For a deep space mission, you care about the payload weight, and biological systems have the advantage that they self-reproduce: You don’t need to send a lot. That’s why our biohybrid version is highly attractive.”

The only other requirement, besides sunlight, is water, which on Mars is relatively abundant in the polar ice caps and likely lies frozen underground over most of the planet, said Yang, who is a senior faculty scientist at Berkeley Lab and director of the Kavli Energy Nanoscience Institute.

The biohybrid can also pull carbon dioxide from the air on Earth to make organic compounds and simultaneously address climate change, which is caused by an excess of human-produced CO2 in the atmosphere.

In a new paper to be published March 31 in the journal Joule, the researchers report a milestone in packing these bacteria (Sporomusa ovata) into a “forest of nanowires” to achieve a record efficiency: 3.6% of the incoming solar energy is converted and stored in carbon bonds, in the form of a two-carbon molecule called acetate: essentially acetic acid, or vinegar.

Acetate molecules can serve as building blocks for a range of organic molecules, from fuels and plastics to drugs. Many other organic products could be made from acetate inside genetically engineered organisms, such as bacteria or yeast.

The system works like photosynthesis, which plants naturally employ to convert carbon dioxide and water to carbon compounds, mostly sugar and carbohydrates. Plants, however, have fairly low efficiency, typically converting less than one-half percent of solar energy to carbon compounds. Yang’s system is comparable to the plant that best converts CO2 to sugar: sugar cane, which is 4-5% efficient.

Yang is also working on systems to efficiently produce sugars and carbohydrates from sunlight and CO2, potentially providing food for Mars colonists.

When Yang and his colleagues first demonstrated their nanowire-bacteria hybrid reactor five years ago, the solar conversion efficiency was only about 0.4% — comparable to plants, but still low compared to typical efficiencies of 20% or more for silicon solar panels that convert light to electricity. Yang was one of the first to turn nanowires into solar panels, some 15 years ago. 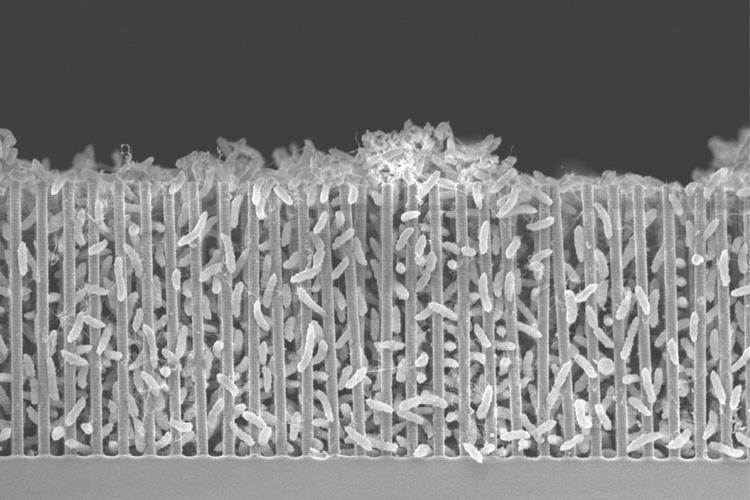 A scanning electron micrograph of a nanowire-bacteria hybrid operating at the optimal acidity, or pH, for bacteria to pack tightly around the nanowires. Close packing gives a more efficient conversion of solar energy to carbon bonds. The scale bar is 1/100 millimeter or 10 microns. (UC Berkeley image by Peidong Yang)

The researchers eventually discovered that the bugs, as they produced acetate, decreased the acidity of the surrounding water — that is, increased a measurement called pH — and made them detach from the nanowires. He and his students eventually found a way to keep the water slightly more acidic to counteract the effect of rising pH as a result of continuous acetate production. This allowed them to pack many more bacteria into the nanowire forest, upping the efficiency nearly by a factor of 10. They were able to operate the reactor, a forest of parallel nanowires, for a week without the bacteria peeling off.

In this particular experiment, the nanowires were used only as conductive wires, not as solar absorbers. An external solar panel provided the energy.

In a real-world system, however, the nanowires would absorb light, generate electrons and transport them to the bacteria glommed onto the nanowires. The bacteria take in the electrons and, similar to the way plants make sugars, convert two carbon dioxide molecules and water into acetate and oxygen.

“These silicon nanowires are essentially like an antenna: They capture the solar photon just like a solar panel,” Yang said. “Within these silicon nanowires, they will generate electrons and feed them to these bacteria. Then the bacteria absorb CO2, do the chemistry and spit out acetate.”

The oxygen is a side benefit and, on Mars, could replenish colonists’ artificial atmosphere, which would mimic Earth’s 21% oxygen environment.

Yang has tweaked the system in other ways — for example, to embed quantum dots in the bacteria’s own membrane that act as solar panels, absorbing sunlight and obviating the need for silicon nanowires. These cyborg bacteria also make acetic acid.

His lab continues to search for ways to up the efficiency of the biohybrid, and is also exploring techniques for genetically engineering the bacteria to make them more versatile and capable of producing a variety of organic compounds.

The research is supported by a grant from NASA to the Center for the Utilization of Biological Engineering in Space (CUBES), a multi-university effort to develop techniques for biomanufacturing in space.