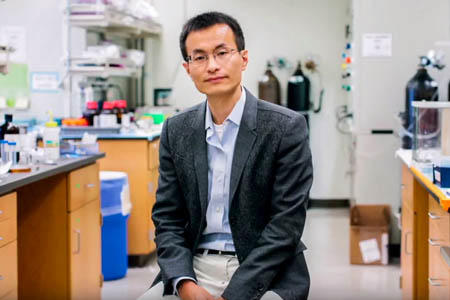 Semiconductor nanowires have witnessed an explosion of interest in the past two decades due to advances in synthesis and the unique thermal, optoelectronic, chemical, and physical properties of these materials. The potential applications of single-crystalline nanowires are truly impressive, including computational nanotechnology, telecommunications, spectroscopic sensing, renewable energy, and the biological sciences. This breadth of application naturally requires a multidisciplinary community, including but not limited to materials scientists, chemists, engineers, physicists, and microbiologists, all converging to solve challenging problems at nanometer length scales.

Semiconductor systems with photon, phonon and/or electron confinement in two dimensions (i.e. nanowires) offer a distinct way to study electrical, thermal, mechanical, and optical phenomena as a function of dimensionality and size reduction. These structures have cross-sectional dimensions that can be tuned from 5 to 500 nm, with lengths spanning hundreds of nanometers to millimeters. The vapor-liquid-solid crystal growth mechanism has been utilized for the general synthesis of nanowires of different compositions, sizes, and orientation. Achieving such high level of synthetic control over nanowire growth allows us to explore some of their very unique chemical and physical properties. For example, semiconductor nanowires can function as self-contained nanoscale lasers, sub-wavelength optical waveguides, photodetector and efficient nonlinear optical mixer. In addition, semiconductor nanowire arrays can be used as potential substrates to achieve high energy conversion efficiency in photovoltaics, thermoelectrics and artificial photosynthesis. One emerging and exciting direction is their application for solar to fuel conversion, or more broadly defined, solar-powered production of value-added chemicals from CO2 and H2O. Semiconductor nanowires represent an important class of nanostructure building block for direct solar-to-fuel application because of their high surface area, tunable bandgap and efficient charge transport and collection. Nanowires can be readily designed and synthesized to deterministically incorporate heterojunctions with improved light absorption, charge separation and vectorial transport. Meanwhile, it is also possible to selectively decorate different oxidation or reduction catalysts onto specific segments of the nanowires to mimic the compartmentalized reactions in natural photosynthesis.

Solar-to-chemical production using a fully integrated system is an attractive goal, but to-date there has yet to be a system that can demonstrate the required efficiency, durability, or be manufactured at a reasonable cost. One can learn a great deal from the natural photosynthesis where the conversion of carbon dioxide and water to carbohydrates is routinely carried out at a highly coordinated system level. There are several key features worth mentioning in these systems: spatial and directional arrangement of the light-harvesting components, charge separation and transport, as well as the desired chemical conversion at catalytic sites in compartmentalized spaces. In order to design an efficient artificial photosynthetic materials system, at the level of the individual components: better catalysts need to be developed, new light-absorbing semiconductor materials will need to be discovered, architectures will need to be designed for effective capture and conversion of sunlight, and more importantly, processes need to be developed for the efficient coupling and integration of the components into a complete artificial photosynthetic system.

Overall, system-level planning of theoretical and experimental efforts is increasingly important for the development of modern materials science. Materials science has evolved over the past decades so that there is now an increasing need for efforts from the various subfields of materials chemistry and physics to come together to solve grand challenges in energy conversion and storage. Today, materials and system design for novel energy conversion and storage applications requires significant attention towards interfaces between different materials components, as very often these interfaces are rate-limiting for energy transfer, and consequently limiting the overall energy conversion efficiency. In this day and age, investigating isolated components is no longer sufficient to solve the kinds of technological challenges involved in the development of an environmentally benign energy infrastructure. Very often, we have to pay considerable amounts of attention to studying the interface between individual components within a device or system. Therefore it becomes increasingly clear that as the traditional disciplinary lines continue to fade away modern science will become significantly more integrated and correspondingly far more effective.