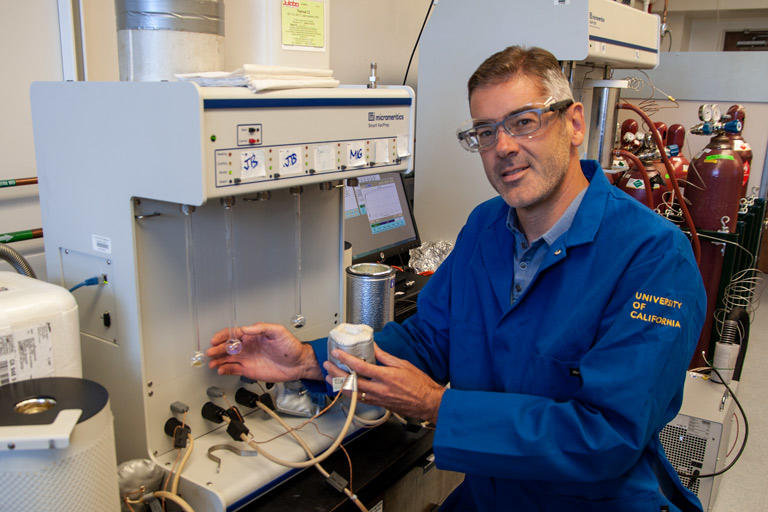 The College of Chemistry is pleased to announce that Professor Jeffrey Long has received the 2020 Ludwig Mond Award from the Royal Society of Chemistry. The Society annually recognizes leaders in various fields of chemistry around the world.

This year, the Society acknowledged over 80 individuals and teams for their exceptional achievements in advancing the chemical sciences through their work in everything from education and research, to innovation, policy and volunteering.

Professor Jeffrey Long is being recognized for pioneering work in the synthesis and characterization of inorganic molecules and materials exhibiting new physical phenomena.

Professor Long creates molecules and materials of potential importance to the mitigation of environmental pollutants, the reduction of energy usage, and the development of renewable energy sources. In particular, his research is devoted to generating new porous solids, including metal-organic frameworks, that possess internal surfaces functionalized with a variety of chemical species to enable their use in gas storage and separation applications. Examples of his successes include the development of materials that can: boost the capacity within the fuel tank of a hydrogen car, efficiently remove carbon dioxide from the flue gases of fossil fuel-burning power plants, separate ethylene from ethane at high temperatures, extract oxygen from air at near ambient temperatures, and fractionate hydrocarbon molecules according to the degree of branching for use in the production of high-octane gasoline with reduced hazardous aromatic content. In addition, he has a long-standing research program on the synthesis of molecular magnets of potential interest for high-density information storage.

The Long group currently is focused on the design and controlled synthesis of novel inorganic materials and molecules toward the fundamental understanding of new physical phenomena, with applications in gas storage, molecular separations, conductivity, catalysis, and magnetism. They employ a range of physical methods to analyze and characterize materials comprehensively, including by gas adsorption analysis, X-ray and neutron diffraction, various spectroscopic techniques, and SQUID magnetometry.

A major focus of research in the Long group is the design and study of metal–organic frameworks—porous, inorganic solids built of metal nodes connected by organic linkers—that are of interest for applications ranging from gas storage and molecular separations to catalysis and battery applications.

Research in the Long group is also heavily focused on the design of molecules exhibiting a strong directional dependence to their magnetization (known as magnetic anisotropy) and magnetic phenomena such as magnetic hysteresis, a property previously thought to be relegated to bulk magnetic materials. These compounds—collectively known as single-molecule magnets—were discovered in the early 20th century and are of interest for applications in information storage, spin-based electronics, and quantum computing.