Fall semester at UC Berkeley brings cool air, sunny skies and hordes of nervous incoming first-year undergrads to the campus. At the College of Chemistry, the beginning of the semester also triggers a sudden epidemic of goofy handmade posters that seem to multiply and cover every available vertical surface. 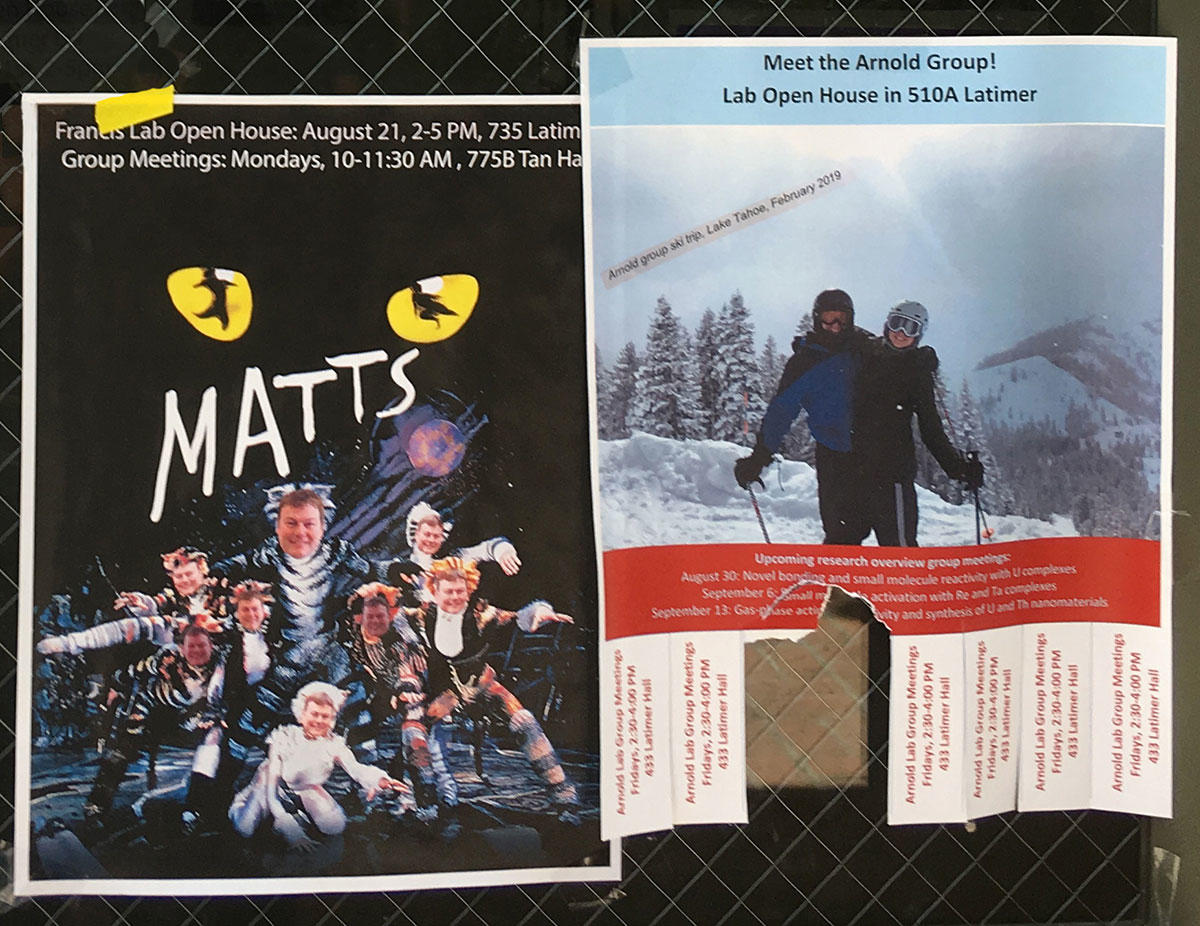 It’s lab recruiting season at the college, when members of our various research groups compete to lure new grad students into paying a visit. The enticements often include good company, free snacks and libations to the gods of science.

This year, there will be three new lab groups forming under three new professors. Alanna Schepartz and Michael Zuerch are joining the Department of Chemistry; Karthik Shekhar will be in the Department of Chemical and Biomolecular Engineering. In the fall, new professors are often still in the process of moving here, awaiting new lab space, or lacking a cadre of existing lab members to design posters and plan parties.

John Arnold, the college’s Associate Dean for Undergraduate Affairs, earned his chemistry Ph.D. at UC San Diego, where he was the first grad student in the lab of then new assistant professor T. Don Tilley (who now teaches at Berkeley). Arnold offers the following advice for students considering joining a new lab:

“Being involved in helping start a new lab is exciting and very dynamic — there's a lot happening and you learn a lot, very quickly, often at the hands of someone who really knows what they are doing and who has a vested interest in making good things happen fast. Plus, it's like Christmas every day with all the shiny new stuff that comes in.”

Here is some brief information about our new professors, why curious grad students should plan a visit, and how to contact them. 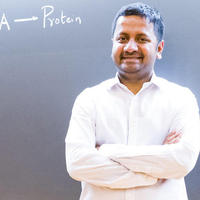 Karthik Shekhar, Assistant Professor of CBE, is not your "grandfather’s chemical engineer". In the Department of CBE, he is joining a remarkably eclectic group of young researchers whose work spans many disciplines. He will also be a member of the Helen Wills Neuroscience Institute.

Shekhar received his Bachelor’s in chemical engineering in 2008 at the Indian Institute of Technology, Bombay. He earned his Ph.D. at MIT in 2015 working with Arup Chakraborty before joining Aviv Regev’s group at the Broad Institute of MIT and Harvard for his postdoc.

Says Shekhar, “The mission of my group at Berkeley will be to uncover the molecular basis of cellular diversity in complex tissues; to explore its developmental origins and understand its functional consequences.”

The Shekhar lab will combine experimental measurements with data-driven modeling and computation. Lab members will first focus on high-throughput single-cell genomic measurements to understand cellular diversity and development in the vertebrate retina, and then expand to explore the conservation of cell types across species, including humans and other primates.

Adds Shekhar, “We are looking for highly motivated undergrads, grad students and postdocs who wish to build a nurturing, interdisciplinary and collaborative environment. All members will have the option to focus on either computational or experimental work, or both. Students from Biophysics, Computational and Systems Biology, and Neuroscience are welcome.”

Shekhar is currently finishing his postdoc, and will not arrive until January 2020. However, he is making a special trip to campus on Sept. 16-19 to interact with students. He will be presenting to CBE students on September 16th.

For questions about his lab group Karthik Shekhar can be reached at karthik@broadinstitute.org. 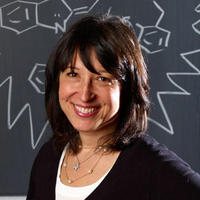 Alanna Schepartz, Professor of Chemistry,  T.Z. and Irmgard Chu Distinguished Chair in Chemistry and Professor of Molecular and Cell Biology comes to the college from Yale University, where she began her academic career in 1988. Born in New York City, she earned her chemistry undergrad degree at SUNY Albany and her organic chemistry Ph.D. back in New York City at Columbia University. However, California is not completely unknown territory for her—before joining the Yale faculty, she completed a postdoc at Caltech in Pasadena.

Schepartz is known for the creative application of chemical synthesis to understand and control biological recognition and function. Her work has improved understanding in multiple areas including the molecular mechanisms of protein-DNA recognition and transcriptional activation, protein design and engineering and their application to synthetic biology, and the mechanisms by which chemical information is trafficked across biological compartments.

Says Schepartz, “Our lab is interested in a host of questions that span the chemistry-biology continuum. It’s a very diverse lab, with synthetic chemists working side-by-side with students interested in biophysics and synthetic biology. We are incredibly excited about using the cell as a factory to make sequence-defined chemical polymers (which don’t really exist outside the biomolecule space); developing novel tools to traffick proteins to the cytosol and nucleus for therapeutic applications, understanding how proteins encode and decode information; and synthesizing new small molecules that can image organelle dynamics at super-resolution for highly extended times and in multiple colors.”

Schepartz is a trail-blazer in many respects. She was the first woman to be granted tenure in Yale's Department of Chemistry, and the first female full professor in any physical sciences department at Yale. Her development of β-peptide bundles was cited by Chemical and Engineering News as one of 2007’s “most important research advances.” From 2005-2016 she served as an associate editor of the Journal of the American Chemical Society and in 2016 was appointed as editor-in-chief of Biochemistry. She is a member of the National Academy of Sciences and was just awarded the 2020 ACS Ralph F. Hirschmann Award in Peptide Chemistry.

For questions about her lab group, Alanna Schepartz can be reached at schepartz@berkeley.edu. She is squatting in 446 Latimer until her office is renovated. 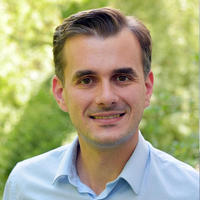 Michael Zuerch, Assistant Professor of Chemistry, grew up in a rural area in the former East Germany, where he developed his mechanical abilities and the knack for building and maintaining all sorts of equipment. He spent most of his undergrad and grad school years studying in the city of Jena, an optics center and the home of the Carl Zeiss company. The words “Carl Zeiss Jena” adorn some of the most beloved optical equipment in the world, from bird watcher’s spotting scopes to camera lens for classic film, modern digital and cinema cameras, to scientific equipment like optical and electron microscopes.

As a postdoc in the Leone and Neumark groups in the College of Chemistry, Zuerch built one of the most sophisticated laser instruments in the lab (and possibly the world). Following his postdoc stay, he returned to Germany and started his independent academic career, but was recruited to return to the college to join the faculty this year.

At the college, the Zuerch lab will develop novel nonlinear X-ray spectroscopy instruments and techniques. He is specifically interested in studying and controlling material properties on time scales down to the sub-femtosecond regime and on nanometer length scales. The group will tackle challenging problems in quantum electronics, information storage and solar energy conversion.

Says Zuerch, “My team will explore structural, carrier and spin dynamics in novel quantum materials and heterostructures, and on surfaces and at interfaces, to answer current questions in materials science and physical chemistry.” His multidisciplinary research program combines the exquisite possibilities of ultrafast X-ray spectroscopy and nanoimaging and will allow for close collaborations with material synthesis and theory groups.

Zuerch has just taken delivery of his lab’s custom-built high powered laser, and will spend the next several months assembling and testing it. It will be capable of performing experiments not possible on any other device in the world.

For questions about his lab group Michael Zuerch can be reached at mwz@berkeley.edu. 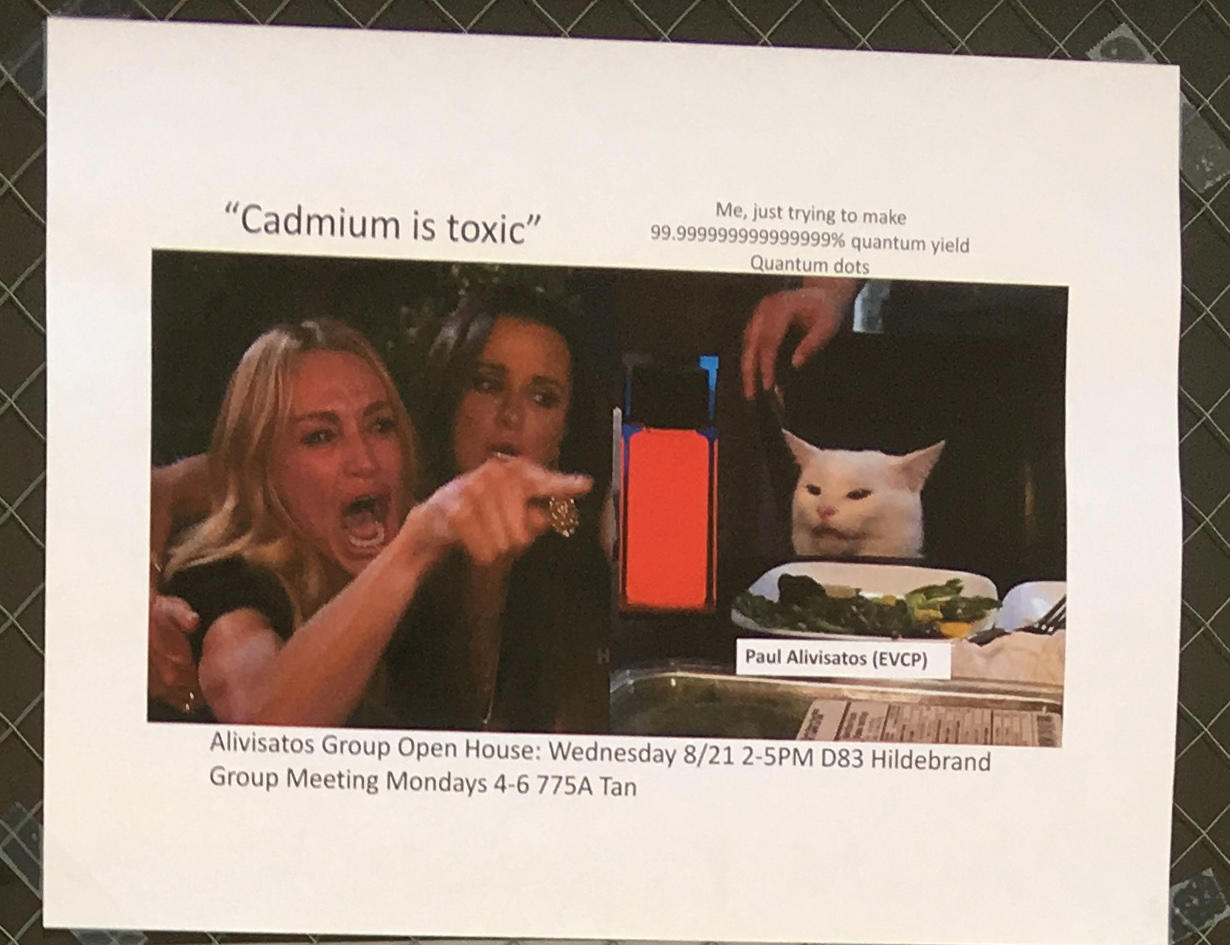 Being involved in helping start a new lab is exciting and very dynamic — there's a lot happening and you learn a lot, very quickly, often at the hands of someone who really knows what they are doing and who has a vested interest in making good things happen fast. Plus, it's like Christmas every day with all the shiny new stuff that comes in.
John Arnold, Undergraduate Dean and Professor of Chemistry