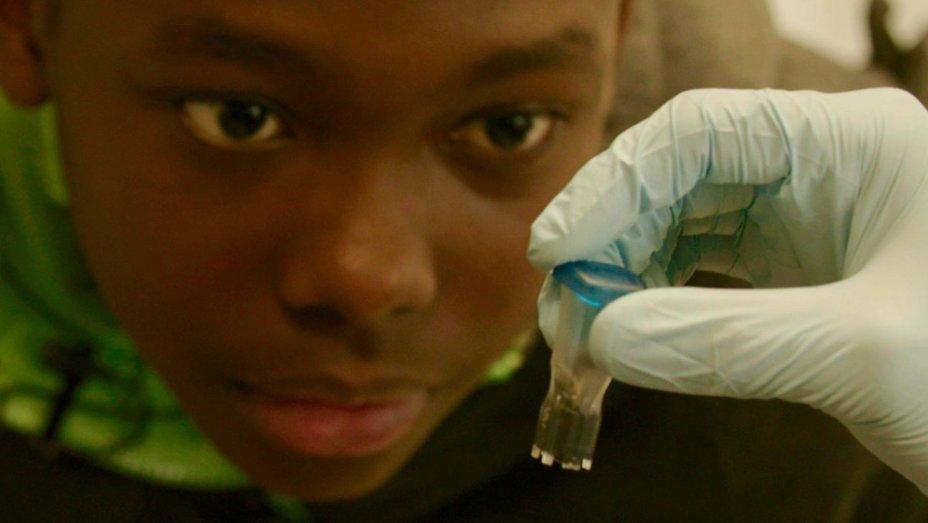 Still from the film 'Human Nature'

THE BOTTOM LINE: Maybe the best-yet guide for those mystified by CRISPR.

How many newspaper stories, magazine features and TV segments have been produced so far that marvel at the revolutionary capabilities of CRISPR while giving almost no idea at all how the gene-editing discovery actually works? Those who lament the state of science journalism should take note of Human Nature, in which Adam Bolt and helpful scientists offer an easily understood introduction to techniques often described with head-scratching phrases like "it's a word processor for DNA!" A cogent, wide-ranging look at both the discovery and the nascent, soon-to-be-giant fights humans are having over it, the documentary should be welcomed in its limited theatrical release and will be even more useful on video.

News consumers who are tired of being told simply that this new technology — is it a surgical device? a computer program? a drug? — lets researchers rewrite a patient's DNA should be satisfied with Bolt's more patient explanation. Once we learn how strands of DNA can repair damage they sustain by copying information from identical "sister" strands, we understand the usefulness of replacing those sisters with new strands that, for instance, have removed genes that are causing a patient's disease.

Creating those new strands got exponentially easier when Jennifer Doudna and Emmanuelle Charpentier proposed a way to "program" a virus-fighting protein called Cas9, using it to seek certain sequences of genes and cut them out. (Please forgive the oversimplification here and elsewhere — fortunately, Bolt's graphics team supplies smart illustrations that make sense of easily confused terms like "programmed" in this context.)

Stepping away from the specifics of how CRISPR works, interviewees remind us that the manipulation of genes is nothing new; it's just made vastly simpler and cheaper by these developments. (One compares CRISPR to Ford's Model T: It wasn't the first car; it was just the one that changed the world.)

Starting the film by interviewing a boy whose struggle with sickle cell anemia might be ended by these new therapies, Bolt frequently refers to medical uses most people would endorse without hesitation. Then come the complications. We meet the parents of a girl with albinism. They realize others would probably elect to cure this condition at infancy if given the chance; but look at what a happy kid she's grown up to be, despite the visual impairments that come with her condition.

Things get more intriguing when we talk to researchers and ethicists, who don't always say what we expect to hear. Bioethicist Alta Charo, whose optimism about human nature is informed by a lifetime of Star Trek fantasies, pooh-poohs worries about a future of "designer babies." Researcher Stephen Hsu says it's "stupid" and "insane" to worry that tinkering with the characteristics of unborn children might give way to the kind of eugenics Nazis would endorse. It may not surprise you to learn that Hsu is a founder of a company offering these services.

Veteran viewers of this kind of documentary might play Bingo with certain ingredients — the Jurassic Park and Brave New World references; the comparison to a genie that science "can't put back into the bottle." But Bolt's directing debut (he was an editor on such docs as Charles Ferguson's 2008-meltdown recap Inside Job) uses these touchstones intelligently, never coming off as either fearmonger or booster. As in so many arenas, human technology has simply grown far faster than our moral capacity for deciding what to do with it. While clearly fascinated by the world we're stepping into, Human Nature is by no means confident something catastrophic won't happen along the way.