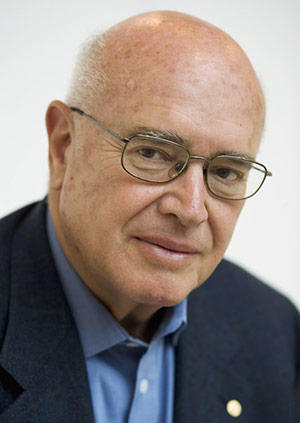 Gabor A. Somorjai, Professor of the Graduate School and Emeritus Chemistry Professor, has been awarded the Helmholtz Medal by the members of the Berlin-Brandenburg Academy of Sciences and Humanities (formerly the Prussian Academy of Sciences.) The award honors his outstand­ing scientific achievements in the field of surface chemistry and catalysis, and especially the catalytic effects of metal surfaces.

Professor Somorjai will be honored at an award ceremony in July on the occasision of Leibniz Day ("Leibniztag") at the Berlin-Brandenburg Academy of Sciences and Humani­ties at the Konzerthaus Berlin, Germany.

Gabor A. Somorjai was born in Budapest, Hungary. He was a fourth year student of Chemical Engineering at the Technical University in Budapest in 1956 at the outbreak of the Hungarian Revolution. He left Hungary and emigrated to the United States, where he received his Ph.D. in Chemistry from the University of California, Berkeley in 1960. He became a U.S. citizen in 1962.

After graduation, he joined the IBM research staff in Yorktown Heights, New York, where he remained until 1964. At that time, he was appointed Assistant Professor of Chemistry at the University of California, Berkeley. In 1967, he was named Associate Professor, and in 1972 promoted to Professor. Concurrent with his faculty appointment, he is also a Faculty Senior Scientist in the Materials Sciences Division, and Group Leader of the Surface Science and Catalysis Program at the Center for Advanced Materials, at the E.O. Lawrence Berkeley National Laboratory.

Professor Somorjai's research interests are in the field of surface science. His group is studying the structure, bonding, and reactivity at solid surfaces on the molecular scale. This knowledge is then utilized to understand macroscopic surface phenomena; adsorption, heterogeneous catalysis, and biocompatibility on the molecular level. To this end, he also develops instruments for nanoscale characterization of surfaces. These include sum frequency generation surface vibrational spectroscopy (SFG) and high pressure scanning tunneling microscopy (high pressure STM) and high pressure X-ray photoelectron spectroscopy (ambient pressure XPS).