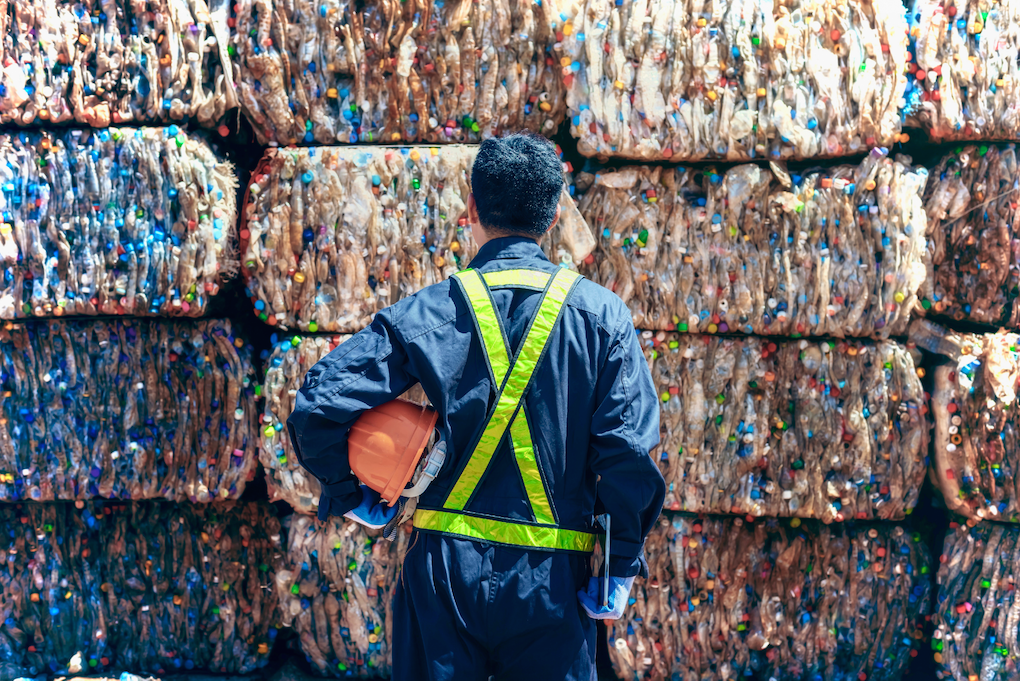 Only about 2% of plastics are fully recycled currently. PDK plastics could solve the single-use crisis. (Chanchai Phetdikhai/Shutterstock)

A new environmental and technological analysis suggests that a revolutionary eco-friendly plastic is almost ready to hit the shelves.

Plastics are a part of nearly every product we use on a daily basis. The average person in the U.S. generates about 100 kg of plastic waste per year, most of which goes straight to a landfill. A team led by Corinne Scown, Brett Helms (Ph.D. '06, Chem) , Jay Keasling, Professor Chemical & Biomolecular Engineering and Bioengineer, and Kristin Persson at Lawrence Berkeley National Laboratory (Berkeley Lab) set out to change that.

Less than two years ago, Helms announced the invention of a new plastic that could tackle the waste crisis head on. Called poly(diketoenamine), or PDK, the material has all the convenient properties of traditional plastics while avoiding the environmental pitfalls, because unlike traditional plastics, PDKs can be recycled indefinitely with no loss in quality.

Now, the team has released a study that shows what can be accomplished if manufacturers began using PDKs on a large scale. The bottom line? PDK-based plastic could quickly become commercially competitive with conventional plastics, and the products will get less expensive and more sustainable as time goes on.

“Plastics were never designed to be recycled. The need to do so was recognized long afterward,” explained Nemi Vora, first author on the report and a former postdoctoral fellow who worked with senior author Corinne Scown. “But driving sustainability is the heart of this project. PDKs were designed to be recycled from the get-go, and since the beginning, the team has been working to refine the production and recycling processes for PDK so that the material could be inexpensive and easy enough to be deployed at commercial scales in anything from packaging to cars.”

The study presents a simulation for a 20,000-metric-ton-per-year facility that puts out new PDKs and takes in used PDK waste for recycling. The authors calculated the chemical inputs and technology needed, as well as the costs and greenhouse gas emissions, then compared their findings to the equivalent figures for production of conventional plastics.

“These days, there is a huge push for adopting circular economy practices in the industry. Everyone is trying to recycle whatever they’re putting out in the market,” said Vora. “We started talking to industry about deploying 100% infinitely recycled plastics and have received a lot of interest.”

Checking the boxes of cheap and easy

To date, more than 8.3 billion metric tons of plastic material have been produced, and the vast majority of this has ended up in landfills or waste incineration plants. A small proportion of plastics are sent to be recycled “mechanically,” meaning they are melted down and then re-shaped into new products. However, this technique has limited benefit. Plastic resin itself is made of many identical molecules (called monomers) bound together into long chains (called polymers). Yet to give plastic its many textures, colors, and capabilities, additives like pigments, heat stabilizers, and flame retardants are added to the resin. When many plastics are melted down together, the polymers become mixed with a slew of potentially incompatible additives, resulting in a new material with much lower quality than newly produced virgin resin from raw materials. As such, less than 10% of plastic is mechanically recycled more than once, and recycled plastic usually also contains virgin resin to make up for the dip in quality.

A GIF showing how PDK plastic readily breaks down when put in an acidic solution. The acid helps to break the bonds between the monomers and separate them from the chemical additives that give plastic its look and feel. (Credit: Peter Christensen/Berkeley Lab)

PDK plastics sidestep this problem entirely – the resin polymers are engineered to easily break down into individual monomers when mixed with an acid. The monomers can then be separated from any additives and gathered to make new plastics without any loss of quality. The team’s earlier research shows that this “chemical recycling” process is light on energy and carbon dioxide emissions, and it can be repeated indefinitely, creating a completely circular material lifecycle where there is currently a one-way ticket to waste.

Yet despite these incredible properties, to truly beat plastics at their own game, PDKs also need to be convenient. Recycling traditional petroleum-based plastic might be hard, but making new plastic is very easy.

“We’re talking about materials that are basically not recycled,” said Scown. “So, in terms of appealing to manufacturers, PDKs aren’t competing with recycled plastic – they have to compete with virgin resin. And we were really pleased to see how cheap and how efficient it will be to recycle the material.”

Scown, who is a staff scientist in Berkeley Lab’s Energy Technologies and Biosciences Areas, specializes in modeling future environmental and financial impacts of emerging technologies. Scown and her team have been working on the PDK project since the outset, helping Helms’ group of chemists and fabrication scientists to choose the raw materials, solvents, equipment, and techniques that will lead to the most affordable and eco-friendly product.

The team’s report, published in Science Advances, models a commercial-scale PDK production and recycling pipeline based on the plastic’s current state of development. “And the main takeaways were that, once you’ve produced the PDK initially and you’ve got it in the system, the cost and the greenhouse gas emissions associated with continuing to recycle it back to monomers and make new products could be lower than, or at least on par with, many conventional polymers,” said Scown.

Thanks to optimization from process modeling, recycled PDKs are already drawing interest from companies needing to source plastic. Always looking to the future, Helms and his colleagues have been conducting market research and meeting with people from industry since the project’s early days. Their legwork shows that the best initial application for PDKs are markets where the manufacturer will receive their product back at the end of its lifespan, such as the automobile industry (through trade-ins and take-backs) and consumer electronics (through e-waste programs). These companies will then be able to reap the benefits of 100% recyclable PDKs in their product: sustainable branding and long-term savings.

“With PDKs, now people in industry have a choice,” said Helms. “We’re bringing in partners who are building circularity into their product lines and manufacturing capabilities, and giving them an option that is in line with future best practices.”
Added Scown: “We know there’s interest at that level. Some countries have plans to charge hefty fees on plastic products that rely on non-recycled material. That shift will provide a strong financial incentive to move away from utilizing virgin resins and should drive a lot of demand for recycled plastics.”
After infiltrating the market for durable products like cars and electronics, the team hopes to expand PDKs into shorter-lived, single-use goods such as packaging.

As they forge plans for a commercial launch, the scientists are also continuing their techno-economic collaboration on the PDK production process. Although the cost of recycled PDK is already projected to be competitively low, the scientists are working on additional refinements to lower the cost of virgin PDK, so that companies are not deterred by the initial investment price.

And true to form, the scientists are working two steps ahead at the same time. Scown, who is also vice president for Life-cycle, Economics & Agronomy at the Joint BioEnergy Institute (JBEI), and Helms are collaborating with Jay Keasling, a leading synthetic biologist at Berkeley Lab and UC Berkeley and CEO of JBEI, to design a process for producing PDK polymers using microbe-made precursor ingredients. The process currently uses industrial chemicals, but was initially designed with Keasling’s microbes in mind, thanks to a serendipitous cross-disciplinary seminar. 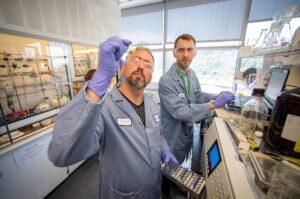 “Shortly before we started the PDK project, I was in a seminar where Jay was describing all the molecules that they could make at JBEI with their engineered microbes,” said Helms. “And I got very excited because I saw that some of those molecules were things that we put in PDKs. Jay and I had a few chats, and we realized that nearly the entire polymer could be made using plant material fermented by engineered microbes.”

“In the future, we’re going to bring in that biological component, meaning that we can begin to understand the impacts of transitioning from conventional feedstocks to unique and possibly advantaged bio-based feedstocks that might be more sustainable long term on the basis of energy, carbon, or water intensity of production and recycling,” Helms continued.
“So, where we are now, this is the first step of many, and I think we have a really long runway in front of us, which is exciting.”
The Molecular Foundry is a Department of Energy (DOE) Office of Science user facility that specializes in nanoscale science. JBEI is a Bioenergy Research Center funded by DOE’s Office of Science.