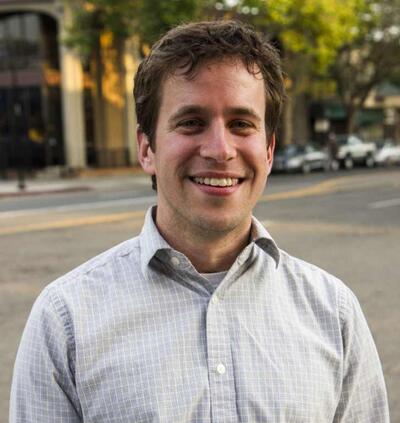 The College of Chemistry is pleased to announce that Evan Miller, (Ph.D. ’09, Chem) Associate Professor of Chemistry and Molecular & Cell Biology and of Biochemistry, Biophysics & Structural Biology, has been awarded the 2021 Donald Sterling Noyce Prize for Excellence in Undergraduate Teaching.

The committe said of Prof. Miller, "Selections from the student evaluations combined with the student letters make a strong case for the effectiveness of Prof. Miller as a communicator and someone who really cares about his students achieving mastery of the material."

Prof. Miller joined the College of Chemistry in 2013. His research focuses on the interface of synthetic chemistry, biology, and neuroscience to explore new chemical methodologies and their relationships between molecular identity and membrane potential in the brain and beyond.

Currently his lab is looking at membrane potential which is a unique biophysical property maintained by every cell on earth. The importance of membrane potential is widely recognized in the context of specialized organs like the brain and the heart. However, our understanding of the ways in which membrane potential, and its coordinated, rapid changes across large numbers of neurons, gives rise to cognition, sensation, and memory remains incomplete.

Prof. Miller was named a Camille and Henry Dreyfus Teacher-Scholar in 2020.

Donald Sterling Noyce (1923-2004) received his Ph.D. in chemistry from Columbia University. He began his academic career at the University of California, Berkeley in 1948 as an instructor in chemistry becoming a full professor in 1960.

Noyce was an established leader in the field of physical organic chemistry. His research dealt with multiple topics including the stereochemical interrelationships of some steroids and terpenes and included some cyclohexane derivatives, cyclodecyl compounds and the analysis of substituent effects in their solvolysis, and the study of mechanisms of acid-catalyzed reactions important in organic synthesis.

In the early 1970s, Noyce turned his attention to teaching and administration. Noyce taught almost all of the courses in organic chemistry offered by the department over his time at the College. During his last decades he was principally responsible for the large organic chemistry with biological emphasis course, known during that period as Chem 8, and taken by thousands of premedical students.

He had a reputation as an excellent teacher, a good lecturer with contagious enthusiasm and clear explanations. He was an amiable person, a kind professor who treated students as people, was available, and always willing to help. He was the first recipient, in 1987, of the Donald Sterling Noyce Prize for undergraduate  teaching, established the year before by an endowment from his late brother Robert Noyce.