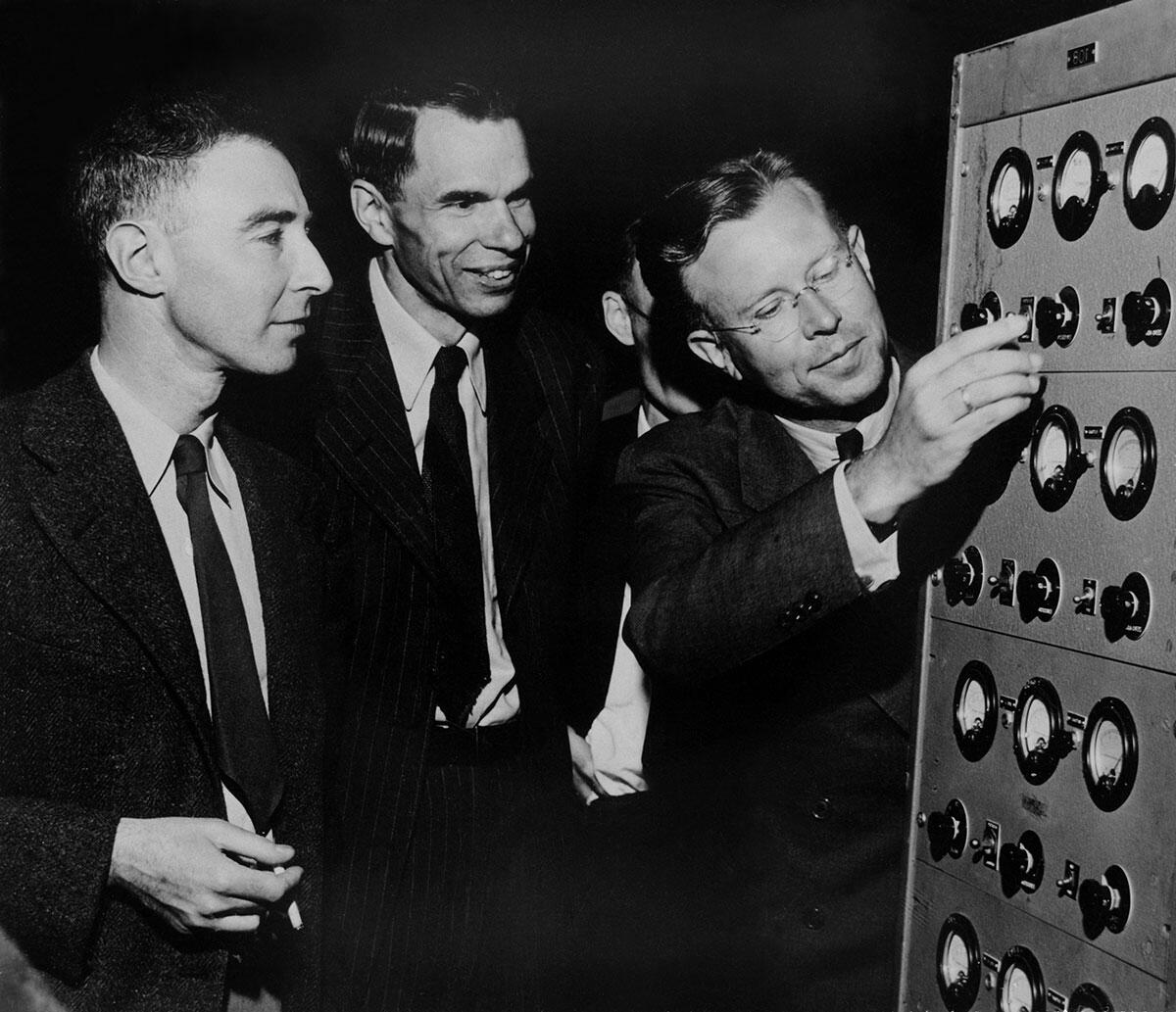 Ernest O. Lawrence, Glenn T. Seaborg, and J. Robert Oppenheimer in early 1946 at the controls to the magnet of the 184-inch cyclotron, which was being converted from its wartime use to its original purpose as a cyclotron. (archive Lawrence Berkeley Lab)

Historians cite the Roaring Twenties as the decade in which the United States began its transition to a modern, technology-based society. For the first time in the nation's history, a majority of its citizens lived in urban areas. The Golden Age of radio broadcasting began. Automobiles, telephones, and electric appliances became staples. The stock market soared and crashed. Prohibition came and (later) went. Suffrage came and stayed. Politicians gave us isolationism, preachers gave us revivalism, and bootleggers brought us organized crime.

This was also a period of momentous individual achievement and the emergence of new leaders who forever changed the way things had been done. Charles Lindbergh's solo flight across the Atlantic ushered in the age of modern aviation; Babe Ruth's home-run heroics made baseball the national pastime; and Henry Ford's assembly lines opened the doors to mass production. In the arts, the literature of Scott Fitzgerald and Ernest Hemingway, the music of George Gershwin, the humor of Charlie Chaplin, and the paintings of Edward Hopper showed the way with their enduring brilliance. And in the arcane world of science, a 27-year-old physics professor in Berkeley began the work that would launch the modern era of multidiscipline national laboratories. His name was Ernest Orlando Lawrence.

Lawrence arrived at the University of California's Berkeley campus in the summer of 1928, having been wooed from a faculty position with Yale University by promises that included auxiliary connections to UC's Chemistry Department. Until then, the traditional practice of science was that physicists, chemists, and biologists worked within their own departments; seldom did the twain meet. Access to scientists and students from other disciplines, as well as to engineering staff, was critical to Lawrence's success as a researcher. It also set the pattern for the unique laboratory he created.

Inspired by a paper from Norwegian engineer Rolf Wideroe, Lawrence invented a unique circular particle accelerator, which he referred to as his "proton merry-go-round," but which became better known as the cyclotron. The first cyclotron was a pie-shaped concoction of glass, sealing wax, and bronze. A kitchen chair and a wire-coiled clothes tree were also enlisted to make the device work. Despite its Rube Goldberg appearance, the cyclotron proved Lawrence's point: whirling particles around to boost their energies, then casting them toward a target like stones from a slingshot is the most efficient and effective way to smash open atomic nuclei.

In his first year at Berkeley, Lawrence developed close relationships with two Cal professors outside of the Physics Department--chemist Gilbert Lewis and electrical engineer Leonard Fuller. From Lewis he would later get deuterons, the hydrogen isotope in heavy water that proved an invaluable "stone" for smashing atoms. With the help of Fuller, who was also vice-president of the Federal Telegraph Company, he obtained an 80-ton magnet for which the company had no use.

The accelerating chamber of the first cyclotron measured five inches in diameter and boosted hydrogen ions to an energy of 80,000 electron volts. Even as his assistants, M. Stanley Livingston and David Sloan, were constructing the 11-inch cyclotron -- a machine that would go on to break the one million electron volt (MeV) barrier -- Lawrence was dreaming of bigger things. The two gifts from his friends -- the magnet and deuterons to use as projectiles -- made possible his dream of constructing a cyclotron with an accelerating chamber some 27-inches in diameter and capable of reaching energies of nearly 5 MeV. But Lawrence would need more laboratory space to see the project through.

Lawrence had been recruited to Berkeley as part of the University's determination to build a physics department equal in stature to its celebrated Chemistry Department. Toward that end, Cal had opened Le Conte Hall in 1924 as one of the largest physics buildings in the world. Le Conte Hall could accommodate the 11-inch cyclotron in Room 329, but a 27-inch cyclotron with all of its trappings would be too much.
With backing from physicists and chemists alike, Lawrence procured from the University an empty building adjacent to Le Conte Hall called the Civil Engineering Testing Laboratory. In August 1931 the building was turned over to Lawrence and renamed the "Radiation Laboratory." 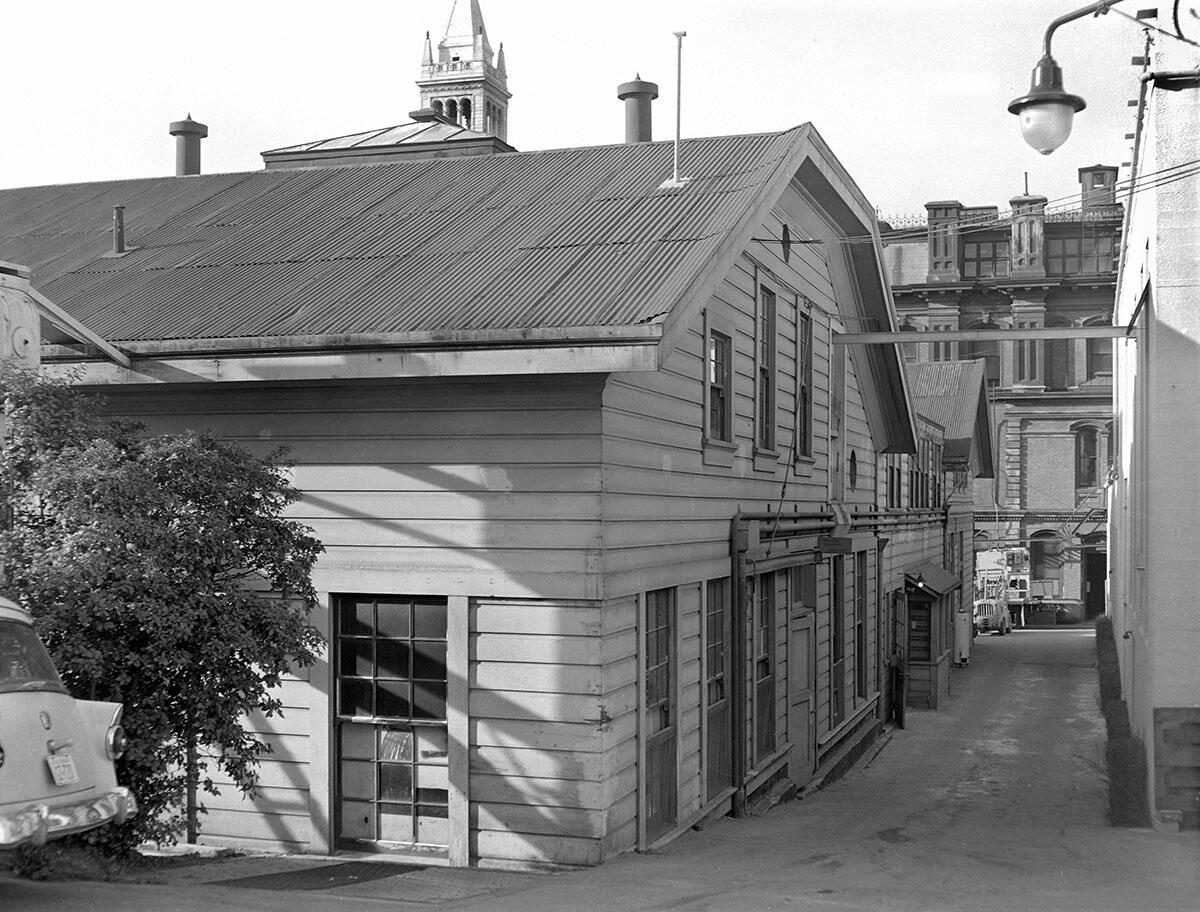 Exterior view of the old Radiation Laboratory built in the Chemistry College complex August 1931. The old chemistry building is in the background.

The 27-inch accelerating chamber of the Rad Lab's first cyclotron was soon replaced with a 37-inch chamber. By 1936, the 37-inch cyclotron, which could accelerate deuterons to 8 MeV and alpha particles to 16 MeV, had been used to create radioisotopes and the first artificial element, technetium. The design, construction, and operation of these increasingly larger cyclotrons involved a growing number of physicists, engineers, and chemists. (Lawrence was never certain as to whether his research should be called nuclear physics or nuclear chemistry.)

In recognition of its departure from the traditional academic lines of departmental science, the University officially established the Radiation Laboratory as an independent entity within the Physics Department on July 1, 1936. Henceforth, the new laboratory would be dedicated to the pursuits of "nuclear science" rather than accelerator physics.

Around this time, Ernest Lawrence also invited his brother John, a physician, to join the Lab and explore the use of radioisotopes in biology and medical research. The extension of the Rad Lab's history-making collaborations between physicists, chemists, and engineers to also include biologists led to the construction of the Crocker Laboratory. Built next to the Rad Lab, the Crocker Lab housed a cyclotron with an accelerating chamber that measured 60-inches in diameter.

The 60-inch cyclotron, which began operations in 1939, was described by visitors as a "truly colossal machine." Its magnet weighed 220 tons, prompting someone to joke that its neutrons would reach Chicago. But even as this huge machine was being put to use on experiments that would garner Nobel prizes for researchers Glenn Seaborg and Melvin Calvin, Lawrence was at work planning an even mightier giant. The next cyclotron that Lawrence envisioned would be so large no laboratory building on campus could contain it.

Fresh off his winning of the Nobel Prize in 1939 for the invention of the cyclotron, Lawrence made his push for a machine that would feature a magnet weighing 4,000 tons. Its accelerating chamber would measure 184 inches in diameter and would be capable of rocketing atomic particles to energies in excess of 100 MeV. To house such a machine and the experimental facilities that would go with it required a building 160 feet in diameter and almost 100 feet tall. A site for this structure was found atop a knobby promontory midway up the ridge behind campus. The promontory, known as Charter Hill, became the permanent site of Lawrence's Radiation Laboratory when construction of the 184-Inch Cyclotron (its design was altered to make it a "synchrocyclotron) was completed in 1946.

Lawrence died on Aug. 27, 1958, of chronic colitis at the age of 57. In his honor, the Radiation Laboratory was officially renamed the Lawrence Radiation Laboratory. In 1971, the laboratories in Berkeley and Livermore (which Lawrence also founded) were separated and the name Lawrence Berkeley Laboratory was born. In 1995, current Director Charles Shank requested that the laboratory be officially renamed the Ernest Orlando Lawrence Berkeley National Laboratory. This was done to fully honor the man whose cross-discipline team approach to research remains the hallmark of the laboratory he founded.