Artist rendering of a layered charge-density-wave material. Blue spheres represent lattice ions while sinusoidal curves represent waves of electron density. In this case, the charge density wave possesses long-range order both within a layer and between layers. (Illustration by Alfred Zong)

When we take an ice cube out of the refrigerator, it turns into liquid water in just a few minutes. At the microscopic level, the three-dimensional periodic arrangement of H2O molecules slowly morphs into a disordered collection of faster moving molecules, a process known as a phase transition. Imagine making the melting process a trillion times faster, and now, quirky things start to happen that evade our everyday senses.

In an exciting new study released today in Nature Communications, a global team co-led by UC Berkeley professor Michael Zuerch, Shanghai Jiao Tong University professors Dao Xiang and Jie Zhang, and UC Los Angeles professor Anshul Kogar, have discovered one such unexpected phenomenon of this process in an electronic analogue of ice crystals. Instead of the melting material turning into a total mess, it retains some of its original spatial periodicity no matter how much energy is supplied to weaken the orderly arrangement. This unexpected behavior has helped to answer a forty-year-old puzzle on how this electronic crystal can be formed in the first place.

Instead of studying ice, the researchers investigated a phase of matter called a charge density wave. “As the name suggests, it literally means that electrons in a solid congregates into a periodic pattern of high and low concentrations so that there is a spatial wave of charge density,” explains Dr. Alfred Zong, a Miller fellow in the Department of Chemistry, who is one of the lead authors of the work published today in Nature Communications. “People are fascinated by this spontaneous ordering of electrons that brings about all kinds of strange phenomena when these electrons move around in a solid.”

“There are dozens of materials known to host a charge density wave, but in this study, we chose to focus on a layered material called titanium diselenide (TiSe2) because it is also proposed to be an excitonic insulator,” comments Yun Cheng, the other lead author of the work.

An excitonic insulator is an elusive state of matter formed in a quantum transition known as Bose-Einstein condensation. The first Bose-Einstein condensate was realized in 1995 in an ultracold collection of atoms – as cold as 170 nanokelvin – that eventually led to the joint Nobel Prize in Physics in 1997 of Steven Chu, Claude Cohen-Tannoudji, and William Phillips. In TiSe2, however, scientists have proposed that such a transition can take place much closer to room temperature when pairs of electrons and holes, or excitons, condense and turn the originally metallic state into a semiconductor.

“In equilibrium, it turns out that the excitonic transition occurs concurrently with the spontaneous ordering of electrons into a charge density wave, both around 200 K,” says Zong. “Therefore, there is a huge debate on what is the role of excitonic condensation in driving the periodic pattern of electron densities in this material.”

Melting within a trillionth of a second

In the study’s experiments, researchers tested this phase transition in TiSe2 not by heating it up, but by shining an ultrashort flash of laser light. “If we make the light pulse as short as the time it takes the atoms to move, we then have the ability to resolve superfast dynamics in the microscopic world that are otherwise inaccessible,” explains Professor Zuerch. The experiments were carried out at the ultrafast electron diffraction beamline in Shanghai Jiao Tong University developed by the team of professors Dao Xiang and Jie Zhang. By examining the peaks in a series of diffraction images, the group of scientists recorded movies of atomic motion on the time scale as short as 50 femtosecond, or five hundredths of a trillionth of a second.

Experimental setup and typical high-energy electron diffraction pattern of TiSe2. Relativistic electrons are generated by photoinjectors – the same technology used in particle accelerators – and are subsequently passed through a double-bend achromatic lens for pulse compression and jitter removal. The setup is capable of achieving a temporal resolution of 50 fs, currently among the best worldwide. (Courtesy the Zuerch Lab)

“Although femtosecond lasers are known to be an effective way to ‘melt’ materials, such as during a LASIK eye surgery, we observed that the pulse of light cannot totally disrupt the ordered electrons in TiSe2,” says Cheng. “Instead, it only destroys the periodic order between different layers while maintaining the periodic pattern within each layer.”

“Essentially, the short burst of light induces a dimension reduction of the electronic crystal from a 3D density wave to a 2D wave,” adds Zong. 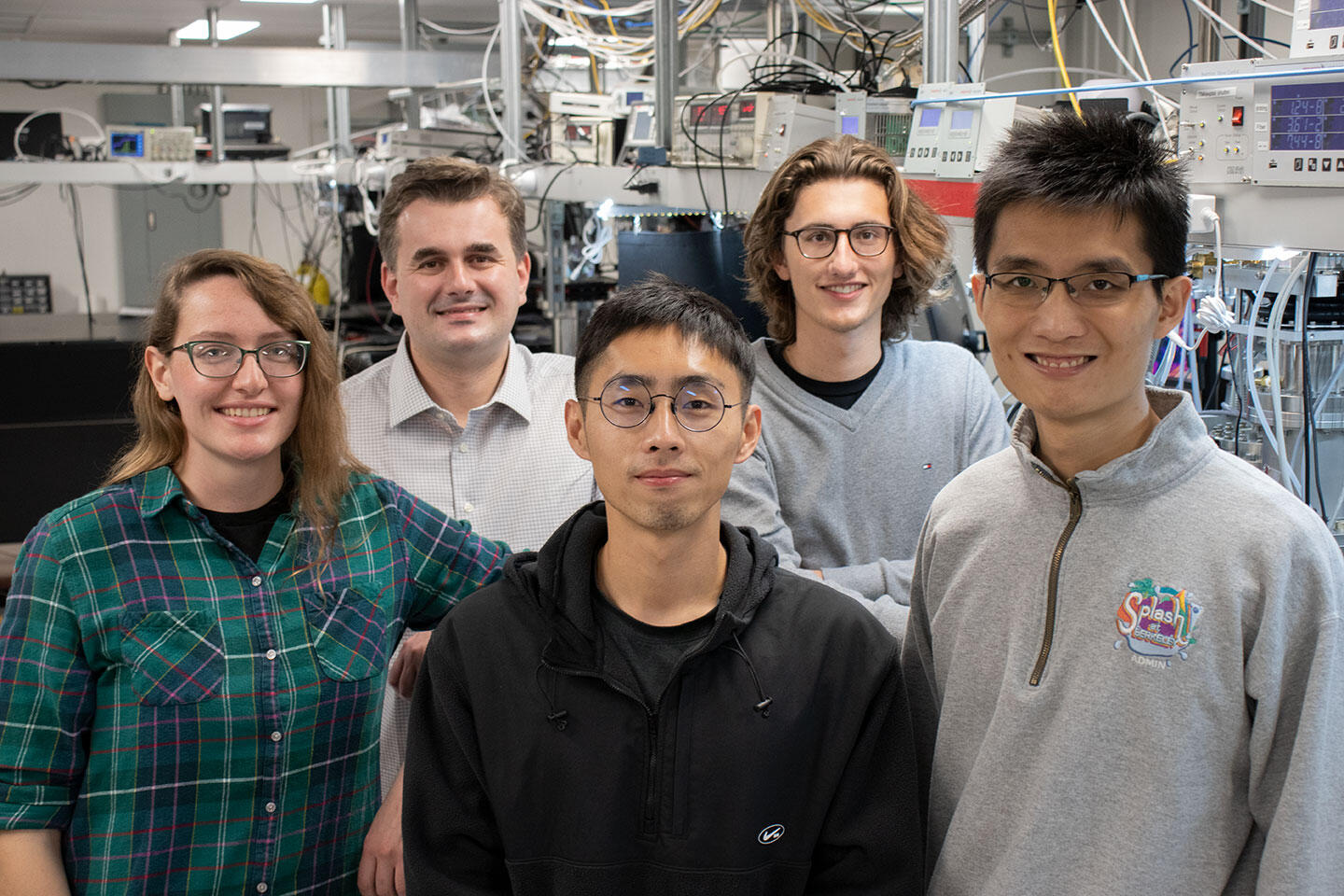 Another surprising outcome from the experiment is that the dimension reduction does not occur unless pairs of electrons and holes are broken by the flash of laser light, namely, unless the excitons in the material are destroyed. This observation allows the team to conclude that the role of excitonic interactions, which has long been debated since the 1970s, is to maintain the inter-layer order of the electronic crystal. Beyond the fundamental understanding gained about how order in this crystal stabilizes, and how it can be controlled on a molecular level at extremely short timescales, such optically switchable phases of matter that return back to the original state in a fully reversible manner are of great interest for memory and computational applications.

“This work gives us an exciting glimpse of the kind of phenomena that can happen if we drive a phase transition as quickly as the electrons in the material can react.” Professor Zuerch states. “While we were able to observe the fast atomic movement in this study by the state-of-the-art electron diffraction instrument, our hope is to resolve the even faster dynamics of excitons in the future. This will help us understand how to tailor the light pulse to design specific nanoscopic dynamics and to realize emergent states in quantum materials like TiSe2.”