David Schaffer selected to serve as next director of QB3-Berkeley 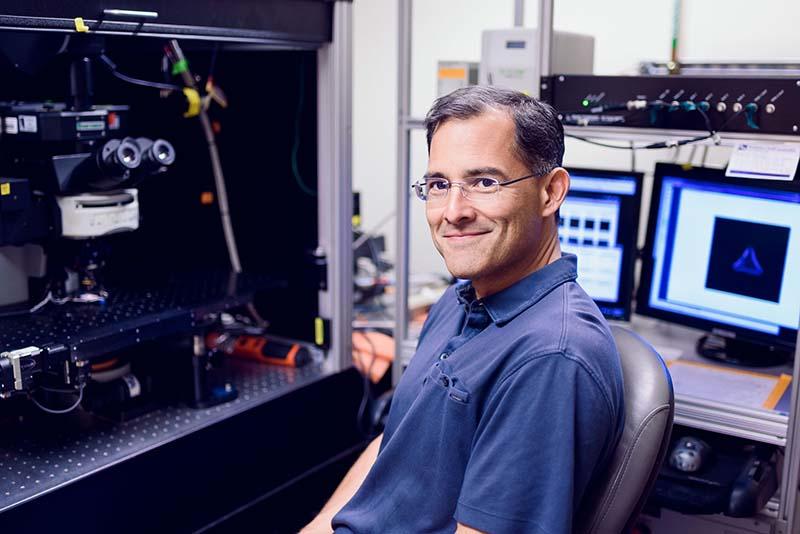 David Schaffer with the multiphoton fluorescent confocal microscope used by his research group to measure the success of gene delivery by their engineered viruses. Photo credit: Mark Joseph Hanson

Professor David Schaffer has been selected to serve as the next director of Berkeley’s California Institute for Quantitative Biosciences (QB3-Berkeley), effective July 1, 2020, following a campuswide search chaired by MCB Professor Jasper Rine. Schaffer is succeeding Susan Marqusee, who stepped down June 30, at the end of two highly successful terms in the position.

Schaffer is a Professor of Chemical and Biomolecular Engineering, Bioengineering, and Neuroscience at University of California, Berkeley, where he has also served as the Director of the Berkeley Stem Cell Center. He received his Bachelor of Science degree in 1993 from Stanford University’s Department of Chemical Engineering. In 1998 he earned his PhD in Chemical Engineering from the Massachusetts Institute of Technology, advised by Professor Doug Lauffenburger. Subsequently, he worked as a postdoctoral fellow in the laboratory of Fred Gage at the Salk Institute for Biological Studies in La Jolla, CA, before taking his position at UC Berkeley in 1999. At Berkeley, Schaffer applies engineering principles to enhance stem cell and gene therapy approaches for neuroregeneration. This work includes mechanistic investigation of stem cell control, as well as molecular evolution and engineering of viral gene delivery vehicles.

Schaffer has also co-founded six companies, one of which is in human clinical trials. He has received an NSF CAREER Award, Office of Naval Research Young Investigator Award, Whitaker Foundation Young Investigator Award, and was named a Technology Review Top 100 Innovator. He was also awarded the American Chemical Society Marvin Johnson Award in 2017 and the AIChE Andreas Acrivos Professional Progress Award in 2020. His broad and deep scientific knowledge and entrepreneurial expertise will serve the QB3-Berkeley community well.

Founded in 2000, QB3 is a university, industry and government partnership involving campuses of the University of California (UCB, UCSF, UCSC). Its mission is to harness the quantitative sciences to integrate our understanding of biological systems at all levels of complexity—from atoms and protein molecules to cells, tissues, organs and the entire organism. This long-sought integration allows scientists to attack problems that have been simply unapproachable before, setting the stage for fundamental new discoveries, new products and new technologies to solve some of the greatest challenges facing society in the areas of health, environment and energy. In addition to the creation of fundamental new knowledge and potent new technologies, a major goal of the Institute is to train a new generation of students able to fully integrate the quantitative sciences with bioscience research.

QB3-Berkeley and the entire campus community welcomes Professor Schaffer to this important position and thanks Professor Marqusee for the remarkable leadership and vision she has brought to the role over the past 11 years.