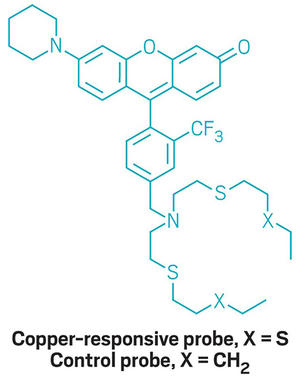 According to a new study from the lab of Christopher J. Chang at UC Berkeley, copper plays a role in regulating sleep.
When Chang and his research team at the University of California, Berkeley, induced a copper deficiency in zebrafish by genetically manipulating a protein responsible for copper uptake, the fish became sluggish, with a disrupted sleep-activity cycle (Nat. Chem. Biol. 2018, DOI: 10.1038/s41589-018-0062-z). “We show that just modulating the copper status has grave consequences for sleep behavior,” Chang says. “You don’t wake up very easily, and you end up getting tired during the day.”

The researchers suspect that copper is so important because it’s needed by the enzyme dopamine β-hydrolase, which is required for the production of norepinephrine, which happens in a part of the brain known as the locus coeruleus. Biologists know that this region of the brain is involved in many behaviors, including sleep.

“You only get the synthesis of norepinephrine if you have sufficient amounts of copper, which is required to activate, this enzyme,” Chang says.

But Chang thinks more is probably going on. “There appears to be more copper that’s stored and moved with neural activity than can be accounted for just by dopamine β-hydrolase,” Chang says. His team plans to study whether extra copper can be beneficial.

One technology advance that helped the researchers was a new pair of fluorescent probes for imaging copper in zebrafish brains. The probes are the same size and shape, but only one responds to copper. The other serves as a control. The difference between the probes is in the number of sulfur atoms. The copper-responsive one has four sulfurs. In the control probe, two sulfurs have been replaced by carbons.

The researchers imaged the distribution of copper in zebrafish brains using the probes and a complementary probe-free method—laser ablation inductively coupled mass spectrometry. In both methods, the locus coeruleus was highly enriched in copper.

Anthony White, a neurodegeneration expert at the University of Melbourne, calls the work “a great example of how traditional chemical and biophysical approaches to understanding copper can be combined with genetic approaches to tease out new roles for copper in biology.”