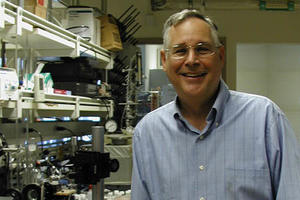 Clayton Radke, Professor of Chemical and Biomolecular Engineering, is the recipient of a 2020 IOR Pioneer award from the Society of Petroleum Engineers (SPE) for his important scientific research into surface interfaces. The IOR Pioneer award is the highest honor presented by the organization. Professor Radke will be presented with the award during the SPEIOR conference in April, 2020.

The IOR Pioneer Award is presented to members of the Society of Petroleum Engineers who have made significant advancements in improved oil recovery technology. The award acknowledges early and long-term involvement in the development and/or application of IOR technology and industry recognition in the field.

Chair of the Chemical and Biomolecular Engineering Department Jeffrey Reimer stated, "Professor Radke is able to bridge the fundamental and applied with great elegance, so it comes as no surprise that he would be recognized for enhanced oil recovery by employing engineering science."

SPE's history begins within the long tradition of the American Institute of Mining Engineers (AIME). AIME was founded in 1871 in Pennsylvania  to advance the production of metals, minerals, and energy resources through the application of engineering. In 1913, a standing committee on oil and gas was created within AIME and proved to be the genesis of SPE. The Oil and Gas Committee of AIME soon evolved into the Petroleum Division of AIME as membership grew and as interest among the members was more clearly delineated among the mining, metallurgical, and petroleum specializations