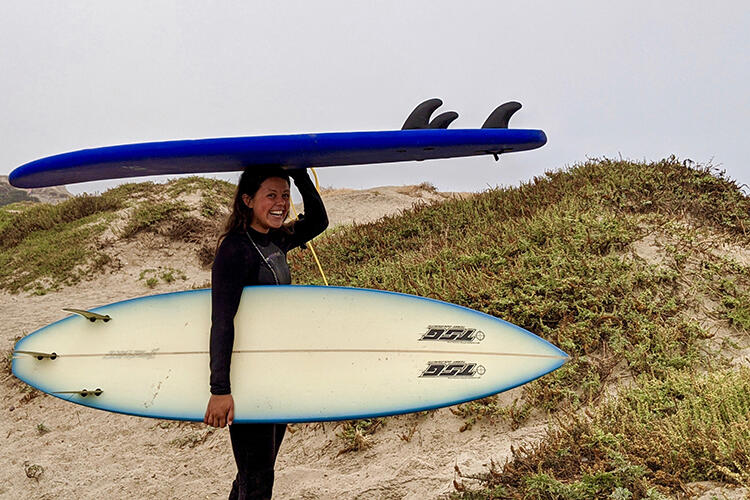 The COVID-19 pandemic has separated us, but sharing stories about how members of the campus community have been surviving — and even thriving — since last spring can help draw us together. This story features undergraduate Katia Gibson, a chemistry major and Cal ambassador who will graduate in May, 2021. Berkeley News has gathered inspiring personal tales of heartache and triumph related to the coronavirus and will run them periodically in the coming weeks. Check out the series here.

Since age four, when her father bought her a foam surfboard, Katia Gibson has been chasing the waves. So, it’s no surprise that when UC Berkeley courses went online late last winter, the chemistry major, now in her last semester as a Berkeley undergraduate, saw the chance to start chasing her dream — surfing every day, several times a day, at some of the world’s great surf destinations.

Of course, she’s also juggling her remaining college courses and working a few jobs, remotely, to pay the bills — as a Cal ambassador, giving online tours of the campus to prospective students and their families, and as a Berkeley High School tutor. She rents low-cost Airbnbs or apartments as she goes, making sure they’re a short bike ride from the ocean, since she doesn’t own a car.

“I literally have surfed the last 250 days, and I’m not sick of it,” said Gibson, who grew up in Mountain View. “I even get up for the sunrise. I can’t get enough. I’ve had an epiphany, and I want my life to be like this.” 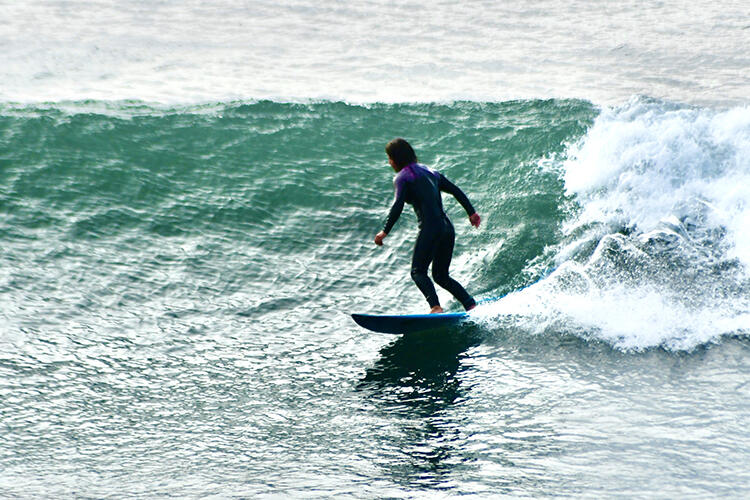 Katia Gibson’s mother, Martha Gomez, shot this photo of Gibson surfing this month at the Hook, a reef break on the east side of Santa Cruz, near 41st Avenue. (Photo by Martha Gomez)

By now, Gibson’s friends, classmates, instructors and employers know she’s hanging ten, some having seen her wet hair on Zoom or while following her surfing lifestyle on social media. Since the arrival of COVID-19, she’s surfed most of the California coast between Bolinas and San Clemente and caught waves off South Africa and O’ahu.

“Most people are really supportive of creative, safe hobbies to make it through the COVID era, … and some are envious that they don’t have the same ability to drop everything and move to a beach town,” she said. “Discovering such a huge passion for surfing has been really beneficial to my health and wellness, and it’s helped me find my best self these last 12 months.”

And her parents? “Both are really stoked for me,” she added. “They saw me grind really hard in my UC Berkeley classes and can tell that surfing gives me lots of balance and something constructive during the pandemic. I honestly planned my online courses so that I can surf for a couple hours every day, and I would say that surfing feels as important as my academics, in my current daily life.”

Gibson is following in the footsteps of her father, Steve Gibson. He spent his 20s and 30s surfing up and down the California coast with his brothers, having taken up the sport while attending Westmont College, a liberal arts school in the Santa Barbara foothills. He also was an early pioneer of kiteboarding, competing semiprofessionally around the globe. 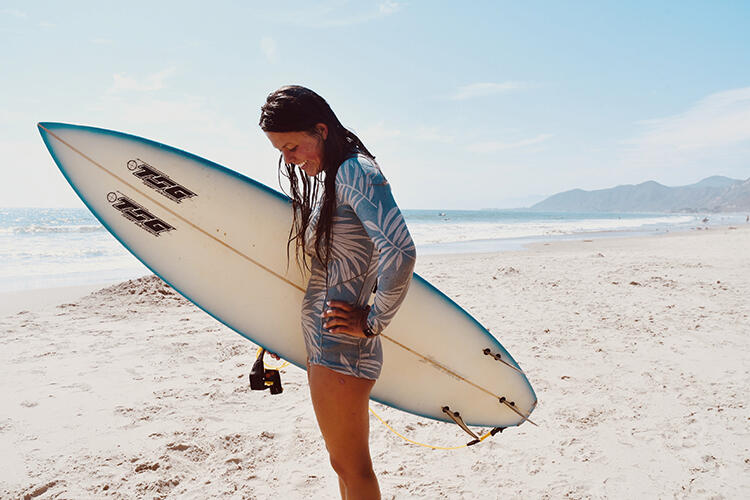 At Emma Wood State Beach off of Ventura Highway last August, Katia Gibson tried out her first “hardtop” surfboard, transitioning from a foam board, or beginner board. (Photo by Martha Gomez)

“I grew up listening to stories of their surf trips, so it’s really cool to finally show up at those same spots myself,” said Gibson. “I wouldn’t say I’m checking anything off (a list), per se, but I know I’m probably surfing the same breaks he did 40 years ago. I do have a big global surf map on my wall, so every surf spot in the world is a potential future adventure.”

As a youngster, Gibson was “pretty nervous” around the ocean, she said, and her mother, Martha Gomez, was equally apprehensive about her children surfing. Gibson stuck to boogie boarding until she was 16. Then, on a “flat day” — when there was a lack of waves — she took a surf lesson in Santa Cruz, a 45-minute drive from Mountain View, but a road trip her family happily took a few times a week, along with several yearly trips to Southern California beaches. With friends, she also began standing up on a board in the water around that time.

“Once I was standing, I started paddling out with my dad, because he could give me tips and take me to more advanced spots,” she said. On a cold December day in Capitola, wearing only a thin wetsuit, Gibson said her father realized she’d caught the “surf bug” when she stayed in the water for three hours, “until I couldn’t feel my fingers or toes, and my lips were purple. The discomfort of the cold couldn’t keep me from the joy of catching another wave.”

In early March 2020, when the campus shut down in-person classes, Gibson moved to Isla Vista, the unincorporated community adjacent to Santa Barbara. There, it’s affordable for her to rent a room with its own bathroom — and to live so close to the ocean that she can fall asleep to the sound of the waves. Plus, the culture “is really chill,” she said. “It’s pretty common to go to the beach on a skateboard or to a cool little restaurant or to tan on the beach or to take out a guitar and play. Everything is walkable.” 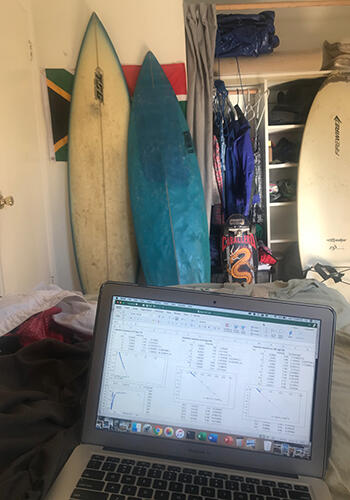 It was hard for Katia Gibson to stay focused on her chemistry course load during finals last December, she said, when the waves “were bigger than I’d ever seen them. … I was so tempted, hearing them from my bedroom window.” (Photo by Katia Gibson)

Gibson feels safe from COVID-19, too, as surfers typically keep their distance from each other in the water, she said, and because surf boards can essentially work as social distancing devices, since they’re “conveniently six feet or longer.”

Last December, after many months in Southern California, Gibson planned to fly to Cape Town, South Africa, where she’d studied abroad and surfed last spring. But the timing was unfortunate: A new, more infectious strain of COVID-19 had just popped up there, her flights started getting cancelled, the country imposed a strict lockdown, and beaches were closed.

“I basically realized this was a sign it wasn’t meant to be,” said Gibson, who quickly bought a one-way ticket to O’ahu, since “it was the best way to stay domestic, but to still experience a really unique lifestyle,” as well as surf in Hawaiian spots her father once enjoyed.

With her best friend, she ended up staying about 10 days in the Honolulu area and another 10 days on the northeast shore. They rode the waves on longboards and shortboards among the island’s infamous North Shore surf spots.

“As it turns out, it’s not so easy to find a consistent, surfable break on O’ahu in winter,” said Gibson. “The south shore was essentially flat, with no waves, and the North Shore waves were the biggest they’d been in years — 30 to 40 feet high, in some spots.”

Gibson’s best, but most embarrassing, memory on O’ahu was when she and her friend attempted surfing off Hale’iwa, a North Shore hub. They were caught in a rip current and had to climb out of the ocean onto a rock jetty, attracting onlookers.

“We were safe and fine, just embarrassed by making a scene for the lifeguard and observers on the beach,” she said. “It was much more fun to actually watch the professional surfers take on the massive swells, and I got to meet some of my favorite pros — from a safe distance — as I watched them do the (Banzai) Pipeline,” a North Shore surf reef that some have called “the ultimate proving ground for surfers.”

Today, Gibson is back in Isla Vista, having quarantined following her O’ahu trip and testing negative twice for COVID-19. She also said it had gotten expensive for her to live on O’ahu on a college budget and to rent a car to surf all sides of the island. 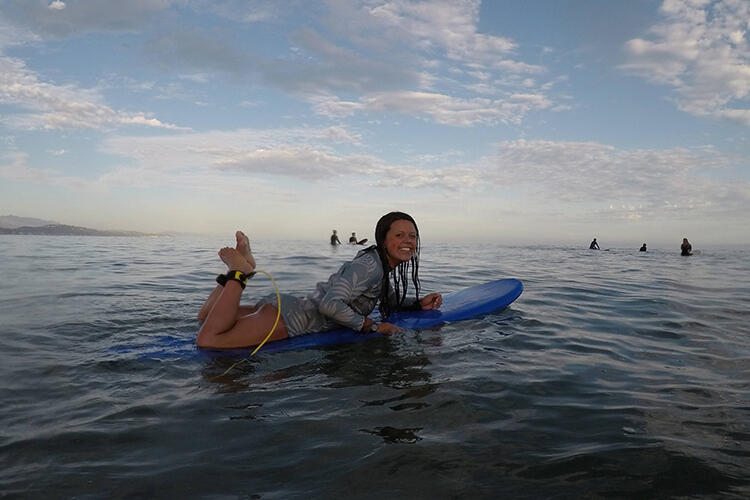 Katia Gibson takes a breather to pose at Campus Point, near the UC Santa Barbara campus, in August 2020. (Photo by Amanda Gersoff)

“Isla Vista feels like home,” she said. “The waves have been huge and fun, so I know I made the right decision in coming back.” With her lightest course load to date, she added that she hopes to spend “as much of my free time in the ocean as possible.”

Gibson also appreciates living in a place filled with memories of her uncle Scott Gibson, who lived and surfed there. He died a little over a year ago. “Moving and making my life here has been really beautiful and healing, because I know he would be so proud of me surfing and thriving here,” she said, “and I really see his spirit in me.”

When June arrives, Gibson will weigh her options again, admitting that it’s fun to be “flexible and open-minded and a little nomadic.”

One thing’s for sure: “I want surfing to be part of my daily routine for maybe the rest of my life,” she said, “so wherever I go next will likely be on a coastline.”

Her advice for others with a dream? “Create your world,” said Gibson. “You have full autonomy.”